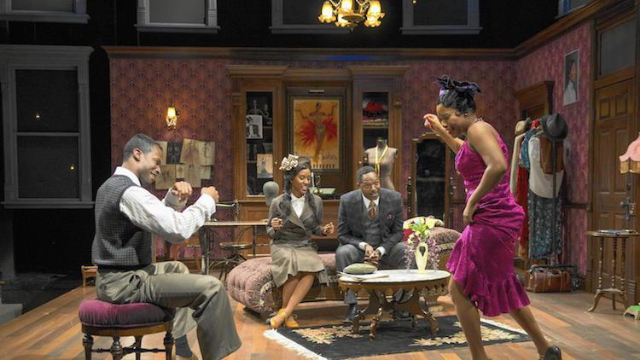 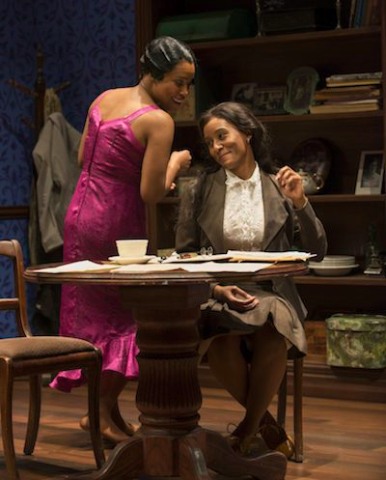 The Harlem Renaissance was an era of great creativity in the arts that progressed through the 1920s, but the Great Depression hit many artists hard. Jobs were scarce and salaries plummeted. In Pearl Cleage’s play, Blues for an Alabama Sky, two artists struggle to stay afloat financially and push forward with their dreams. The new Court Theatre production directed by Ron OJ Parson is a captivating visit to 1930 Harlem, with all its spirit and visual charms.

Guy (an energetic and charismatic Sean Parris) is a costume designer who sometimes resorts to designing wedding gowns and worse to pay the rent. He dreams of designing gowns for the famous singer, Josephine Baker, which would bankroll his dream of moving to Paris. His longtime friend Angel (Toya Turner) dreams of being a successful singer but sometimes is asked to perform in other ways as well. Angel stays in Guy’s apartment while finding her way economically. She yearns for stability but keeps making bad choices.

Neighbor Delia (Celeste M. Cooper) is a political activist and follower of Margaret Sanger. Her goal is to open a birth control clinic in Harlem. Doctor Sam (James Vincent Meredith) is exhausted from delivering babies all night. He’s also sympathetic to women’s needs for other kinds of services, long before Roe v. Wade made them legal. Delia and Sam come together as lovers; their relationship begins sweetly but ends sadly.

Into this very urban mix comes Leland, a young man from Alabama, with conservative views of religion, freedom and sexuality. Leland (Gene Walker) is well dressed and well spoken and seems to Angel like her last chance for a stable life. Leland proposes marriage because he wants to take care of Angel, who reminds him of his late wife.

Guy sends samples to Josephine Baker, who asks him to design several costumes for her as a test of his work. He sends five complete costumes (adding “two inches to all her measurements, because women always lie about their hips”). Guy’s dream comes true when Baker sends a cable praising his work and asking him to come to Paris to work with her. She sends him steamship tickets and money to fund his move.

Parsons’ direction moves this play through its joys and sorrows so smoothly that the two and a half hours fly by. Meredith, a veteran Chicago actor, is solid and sympathetic as Sam. Parris gives a luminous performance as Guy, the “notorious homosexual.” We saw him most recently in The Magic Play at Goodman, where he drew rave reviews. Turner is a glamorous Angel, whose self-centered focus can be attributed to her history: a tawdry life in Savannah that she and Guy shared until they escaped to New York.

Linda Buchanan’s scenic design takes full advantage of the Court stage. The main view is Guy’s apartment, done in a burgundy color palette, with dressmaker dummy, sewing machine and Josephine Baker poster. Delia’s apartment is next door and the front of the stage provides a view of the street. Joshua Horvath’s sound design and Keith Parham’s lighting complete the staging.

Rachel Healy’s costume design is supported by Beth Uber as draper and Austin Pettinger as tailor. Angel’s gowns are nightclub caliber and Guy’s tuxedos and suits are worn to dashing perfection by Sean Parris.

Pearl Cleage has written six plays, nine novels and several nonfiction books. Blues for an Alabama Sky was published in 1999 and premiered at the Alliance Theatre in Atlanta. Blues weaves in references to issues that are still troubling today, such as homophobia, racism and abortion. The Harlem Renaissance is alluded to casually with references to a “party at Langston’s” and the ideas of Marcus Garvey.

Blues for an Alabama Sky is part of a Harlem Renaissance Celebration in Hyde Park, which brings together performing arts, music, film and scholarship with a half dozen participating organizations. See Harlem in Hyde Park for more info.