Museums by Day and Theatre at Night 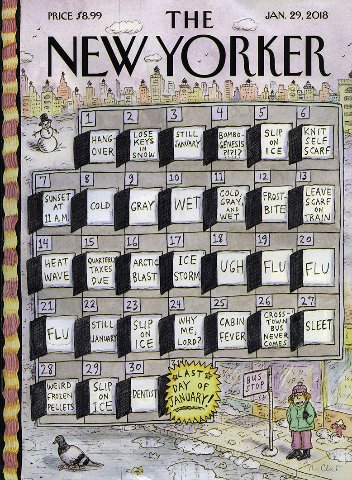 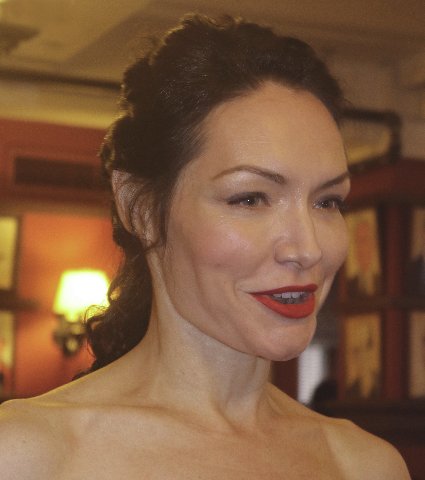 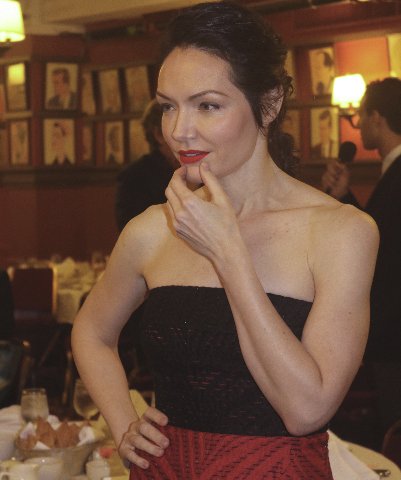 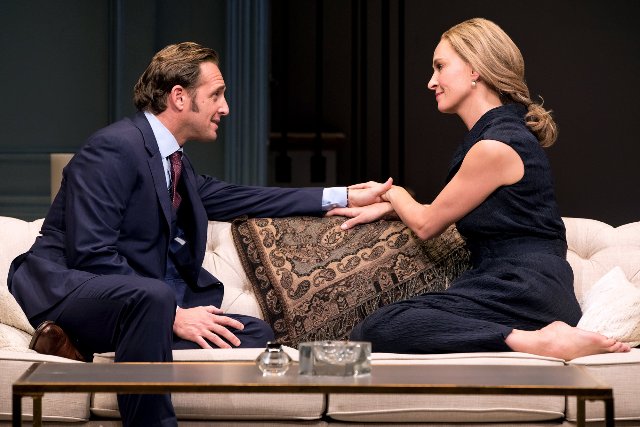 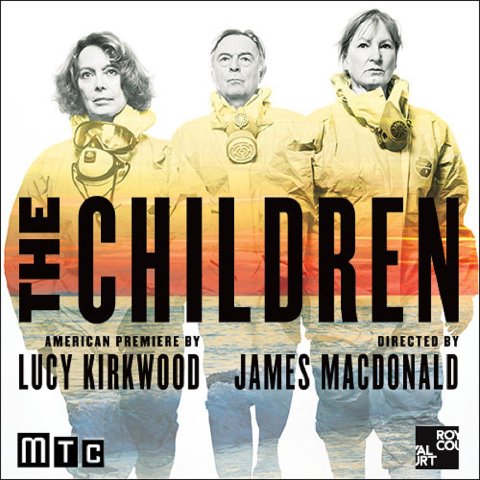 A tense drama transferred from the West End to Broadway. 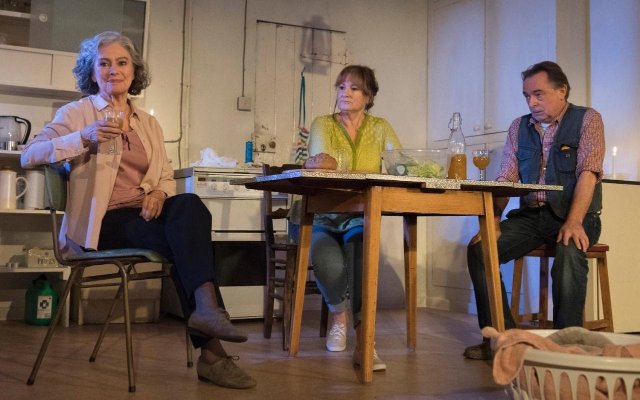 L to R, Francesca Annis as Rose, Ron Cook as Robin, and Deborah Findlay as Hazel in The Children. 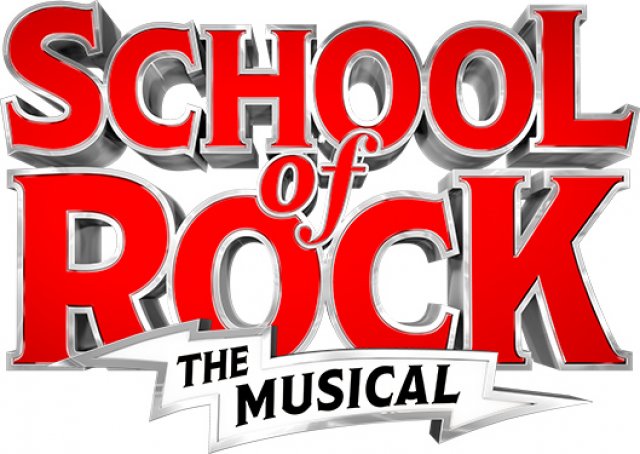 The kids are allright.

Regarding the wisdom of visiting New York in winter the witty January 29 cover of  The New Yorker says it all.

The motive was not to miss a once- in-a-lifetime exhibition Michelangelo: Divine Draftsman & Designer at the Metropolitan Museum of Art. It remains on view through February 12.

During the holidays there were three hour lines.

With an eye on the weather we booked a special rate at the modernist budget hotel The Row on 8th Avenue between 44th and 45th street. In the heart of Times Square, with taxes and a tagged on “Facilities Fee,” it proved to be less than a bargain for a generic room with no amenities.

They have a no penalty 48 hour cancellation policy so we kept an eye on the weather. The week before there was a national cold snap which nipped the ass of my sister Pip and Yuri who endured sleet and black ice in New Orleans.

Our week in the Apple was nippy but endurable.

With an uptown rattler on the corner and cross town bus it was a snap to get to the Met.

There was no line to get in and we spent about three hours in the show which was well attended but not mobbed. After a pricey lunch in the cafeteria (an $18 salad) we were wiped and headed back to pick up tickets for the evening.

Later in the week we returned for another session with Michelangelo as well as Hockney. With a stroll to Madison Avenue, at the former Whitney now Met Breuer, we saw a fabulous exhibition of paintings by Edvard Munch.

In the dead of winter, post holidays, there were no lines for half price theatre TKTS in Times Square. You check the board for what’s available which never includes the long running hits.

Mid January is an odd time for theater as shows are nearing the end of runs or hanging on for potential Tony nominations. A number of marquees were promoting February previews for March and April openings.

In November I spent a week attending the NY conference of American Theatre Critics Association. Astrid departed for family in DC on Friday and missed the weekend shows.

The best of them, and perhaps the most unique and intriguing new show on Broadway, is The Band’s Visit. The show is mostly sold out but on Tuesday the guy in the booth said that he had just five tickets. Ours were decent in the mezzanine and an improvement over my balcony seats last fall. The PR person had run out of comps.

The second time round I enjoyed the show as much, if not more, than the first evening. The show is sparing and intense, more like a drama than a typical Broadway musical. Its intimacy is absorbing as it unfolds gradually pulling us in ever so slowly.

Knowing what to anticipate allowed me to hone in on the nuances of subtle characters, understated moments, divine and telling lyrics, as well as rich and complex subplots and characters.

Led by the magnificent ennui and sublime performance of Katrina Lenk, and the support of co star Tony Shalhoub, it is imperative that you see this show with the original cast.

While Lenk is the favorite for a Tony she may well have competition when Renee Fleming opens later this season in a revival of Carousel.

On Wednesday we had great orchestra seats for Uma Thurman’s Broadway debut in The Parisian Woman written by Beau Willimon based on Henri Becque’s vintage La Parisienne, directed by Pam MacKinnon.

In the manner of the smarmy series House of Cards there was a lot of inside the beltway dishing of dirt. You asked why am I spending big bucks to see a second rate, ersatz TV show? Trust me, Thurman is no Robin Wright. Here, definitely, Thurman was way more wrong than wright.

The supporting cast ranged from mediocre (her husband played by John Lucas) to terrible (Marton Csokas as an insider and her lover).

Being close enough to observe the sweat on her brow enforced that this woman of a certain age has zilch for stage presence. Her role probably would have worked with multiple takes and the chance to eat a camera. From where I sat, however, this was yet another example of a movie star with marquee appeal bombing on the boards.

A plot twist is that she is having a fling with the best of the brightest daughter of a DC matriarch and maven (Blair Brown). There is action on the balcony of her mansion during a soiree.

Her stunning and talented lawyer daughter is played by Tony winner (Hamilton) actress Phillipa Soo. On the night we attended she was replaced by Sydney Lemmon. We were surprised and pleased when she turned in the only credible, compelling, sophisticated and nuanced performance of the ensemble.

On Thursday night we enjoyed truly magnificent theatre in The Children a West End transfer with its original award winning cast.

It is a tightly written play by Lucy Kirkwood which inches up on us with surprising, indeed devastating, twists and turns. It is deftly paced in escalating increments by James Macdonald. Miriam Buether designed the toxic and scruffy set with horrific video projections by Peter Mumford.

There is superb ensemble acting by three British veterans Francesca Annis (Rose) Robin (Ron Cook) and Hazel (Deborah Findlay). They are scientists and engineers who decades ago designed and built a nuclear power plant that has had a catastrophic meltdown.

After an absence of decades Rose has visited the couple. It’s more than a social call and it is revealed that back in the day she had a fling with Robin.

Things go from bad to worse and we won’t reveal how or why. Suffice it to say that The Children was astonishing and we left the theatre in a state of shock. It was not just the power plant that had a meltdown. Me too!

For our last night on Broadway we opted for fun in School of Rock the Musical by the master of the medium, Andrew Lloyd Webber.

You probably know this by now but the kids were just incredible. Yes, they really do play the instruments including astonishing lead guitar, flashy drums and rock solid bass. The chubby, nerdy kid on the keyboards has as many riffs as Elton John.

While anything but a paradigmatic rock star, the hyperactive, indeed demented performance of Justin Collette as the substitute teacher Dewey, was up tight and outasight. It is his energy, commitment and charisma that sells this show and keeps the kids locked and loaded.

With improbable chutzpah he puts the moves on the uptight, straight-laced,  head mistress, Rosalie (Analisa Leaming). She reveals operatic pipes and repressed libido as a closeted Stevie Nicks fan. It’s a hoot when she lets her hair down.

But it’s the kids man! Wicked cool. The kids rock. What a blast for our last night on Broadway.