Delicate Sounds at the Skirball Center 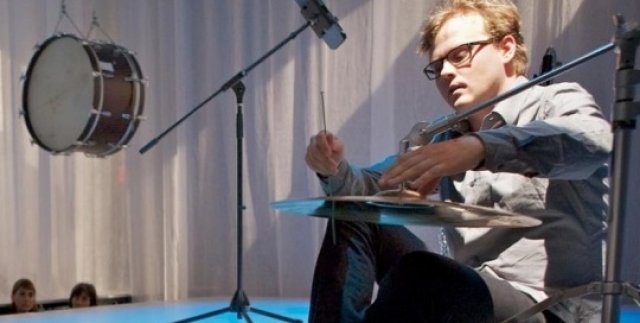 the whisper opera by david lang 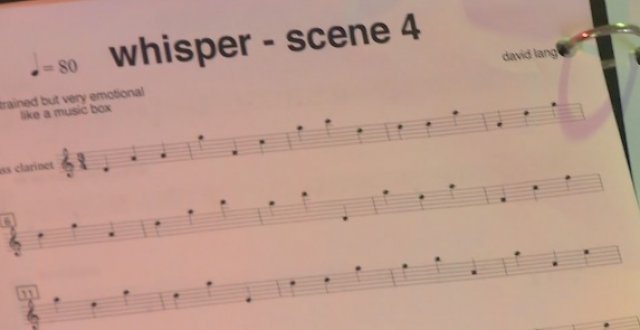 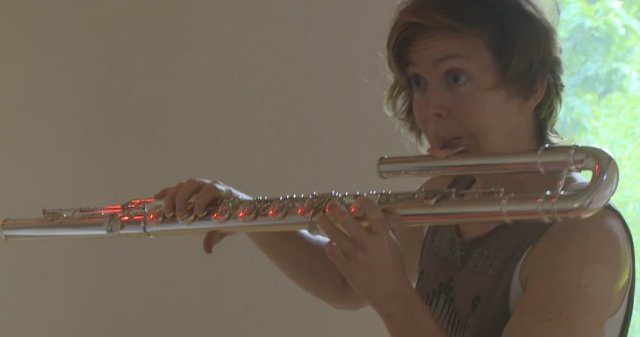 Claire Chase rehearsing on the flute 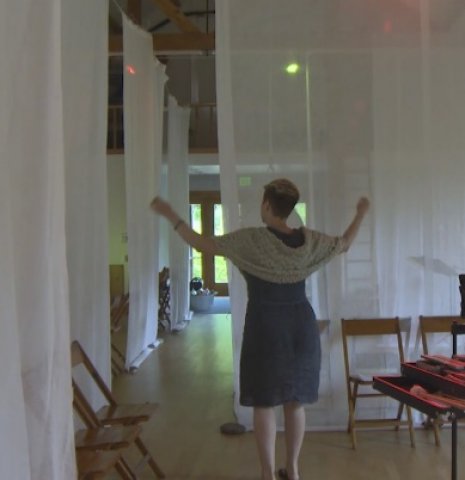 Tony Arnold conducts herself as she rehearses

Before Thomas Adès began to write an opera about a group of opera goers who were unable to escape from a room, Pulitzer-prize winning composer, David Lang, embarked on a project in which we the audience are trapped on the stage, seated with our eye level parallel to a rectangular structure built for performance. We are all like Winnie in Samuel Beckett’s Happy Days, buried under the structure in four rows of seven and four rows of five.  Translucent white curtains separate us from the orchestra of the theater and serve to cordon off the stage walls and divide the rectangle into sections.  Jim Findlay is responsible for the provocative staging and direction.

Lang invites us to listen closely if we want to hear. Adès takes quite the opposite end of the sound spectrum with screeches and yowls.

Lang clearly has a second thought about his work: most music we hear today can be canned and is. We listen on Youtube and iTunes.  Recorded sound is everywhere around us, particularly for New Yorkers, "Due to a signal malfunction at 14th Street, this train is out of service" hisses through static in our subway car.

Perhaps to increase our respect for sound, each of the instruments in this opera's four performance areas on the rectangle has instruments which are played not pianissimo, but almost breathless. How quiet can we be and still breathe?

Cymbals are caressed in circles as a sound is brought gently forward by a finger.  Lang points out that the gockenspiel is being played with fingers and not a mallet with a tiny ball head. The instrumentalist at the glockenspiel whirls his hand like a dancer’s through the air after he plays each note with his finger, and its metallic origin wafts through the air.

The flute is far from my seat, but resonates out, as Claire Chase, the founder of the International Contemporary Ensemble whose members are playing this evening, gently blows or whispers into her instrument.  We hear gentle sounds from a bass clarinet, a clarinet and cello.

We almost hear or think we hear bits and pieces of words as the opera begins. Instrumentalists sometimes accompany the cymbals with gutterals and maybe even words if we could hear them. A drum is scratched in ever larger circles to sound like a storm approaching from afar. Later we will be reminded how far we are from the orchestra seats when the singer leaves the stage and we hear her from what seems like miles away.

The marvelous singer Tony Arnold takes responsibility for the words. At first we strain to hear her and, as time passes, she does not become so much louder as more clear to our ear. We can hear the words, love and home.  As she articulates them, the motion of her arms begins and her hands are somewhat open. As she forms a half circle coming to the end, her hands delicately fold in. If she is conducting anyone, it is herself.

Lang provides four section titles: "when I am alone I always", "they said I was crazy but I," "when I think of you I think of," and "it's not my fault that I am so." Adding these thoughts may double the pleasure, but they are not necessary for a satisfying immersion in the quiet, leaning-in-to-audible and lovely sounds.

The libretto will never be printed.  These words remain between composer/ librettist and artist. Other musicians on stage may catch on to them through repetition. We probably won’t have that chance, but what we miss will not  be sought. The soft evasion leaves us satisfied.

Lang speaks of the fragility of the moment and its delicacy. The kind of authority brought to the sound of a clarinet is not however what feels delicate. It is the moment itself. A fleeting moment, never to be recorded. It is your very own as you listen. Somehow you possess this gift from the composer, a signal from Lang to you transposed through artists is what makes this opera so special.

It is an intriguing evening and a moving one. Intimacy is achieved by our sitting position as audience, our need to lean in to hear and pay special attention, and the sheer beauty of the notes, sounds and words we are successfully able to hear and those that elude us.

If we whisper, can we hear better?  Lang makes his case with charm and a touching, elusive simplicity.