Kathryn Hunter As Timon of Athens

At Theatre for a New Audience 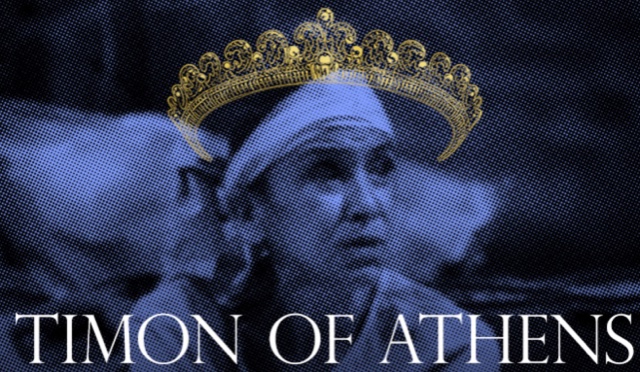 Timon of Athens at Theatre for a New Audience 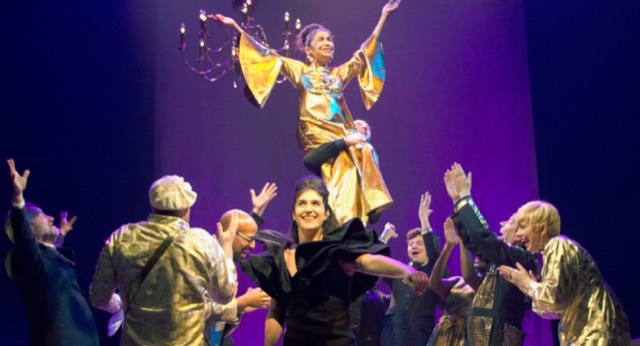 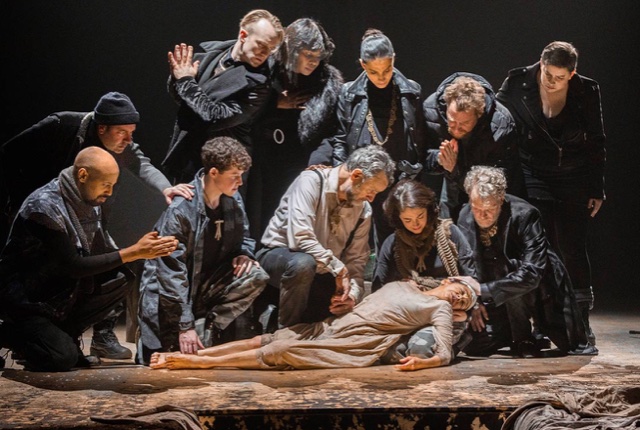 Timon Dies and Athens is saved

Timon of Athens gets a brilliant characterization by Kathryn Hunter at Theatre for a New Audience.  This huge character is played by a diminutive woman who holds us in her thrall every moment she is on stage.  In the first part of the play, Timon enjoys her wealth, mindlessly giving her ‘friends’ whatever they want.  Her Steward tries to tell her that if she keeps gifting at this pace, she will soon be penniless. Distinctive characters move across the stage, intriguing us.

Simon Corwin, the director, has taken what is often regarded as a problem, or unfinished play, and infused it with the complex sense that mindless generosity is not bad.  Its reward in penury legitimately creates an unadulterated misanthrope.  Wealth does not deter Timon’s goodness and faith in her fellow man.  Poverty brings her insights, but does not ameliorate her hatred.  This is the arc of TFANA’s production.

While the lines of consecutive mean-spirited people trying to reverse their fortunes does not give the punch to the second half that the variety of sycophants in the first part does, the brilliance of Hunter’s physical performance and her modulations of voice sweep us into the drama.

The production is first-rate throughout. Soutra Gilmour is both scenic and costume designer. One always wonders at the multiple possibilities the Polonsky Shakespeare Center stage offers. The entrance to Timon’s dining room sweeps down at the center rear stage in the first part.  In the second, a fig tree holds Timon’s home and also provides an opportunity for Timon to suggest that supplicants hang themselves on its branches.

The costumes are of gold color and texture in the first act.  They are military grey-black in the second.  Only Timon wears an increasingly dirty white cotton smock.  She wraps it around herself and also uses it to wipe.  Down and dirty is at the heart of Shakespeare and embraced at every opportunity here.

Scholars now regard this as a play Shakespeare started and did not finish. Plutarch found Timon an unadulterated misanthrope. Shakespeare did not.  Yet it is speculated that he abandoned Timon becauseTimon’s reversal of fortune is not of tragic proportions, since it derives from mindlessness. This has given license to various interpreters.  Thomas Middleton, represented here, is very much in line with the most recent thought. Thomas Shadwell had claimed that his version celebrated Shakespeare’s masterly strokes, but that he (Shadwell) had to make a drama of them.

Director Corwin finds a play here.  It is not a tragedy, however.  The imperfections of a generous woman are clear from the start.  They are the cause of her demise.  Her hatred of mankind is rounded out and edged by Hunter, so that we sympathize.  There is nothing sympathetic about her hatred.

This is true in the entrance of Alcibiades, (Elia Monte Brown), in the second part.  Timon, digging in the woods with her spade, hears the approach of military music.  Hunter starts and leans into her spade, listening.  Gallant Alcibiades enters in a flush of victorious expectation, leading troops full of confidence.  The contrast between the troops’ hope and Timon’s despair, fixed in an angry stare, is stark. The scene of the mock banquet and the excretions Timon utters after her disappointment when friends with whom she has been so generous refuse her requests for help are also high points.

The play’s setting is timeless, because its theme is timeless. This is perhaps why directors and actors are drawn to it.  A naturally noble nature is trashed by a corrupt culture.

Hunter never leads us to approve her indiscriminate denunciations of mankind.  Yet we feel sad that such a magnificent creature has been so upset.  Shakespeare does not have Timon die on stage.  Corwin does.  With Hunter, a supreme physical actress, draped motionless across a lap like a sacrificial lamb, we mourn mankind’s lack of generosity.