Kara Feely and Travis Just Give Us Space Control 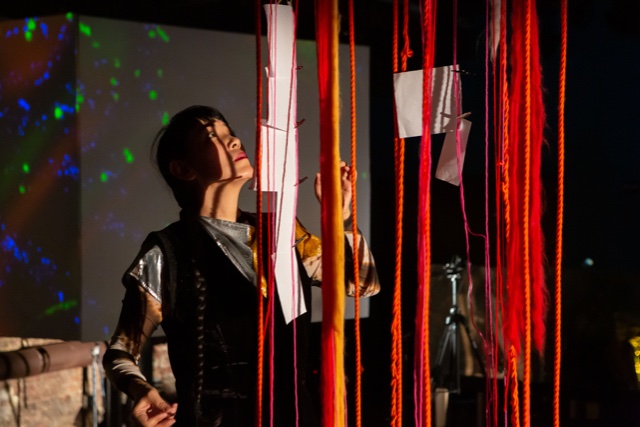 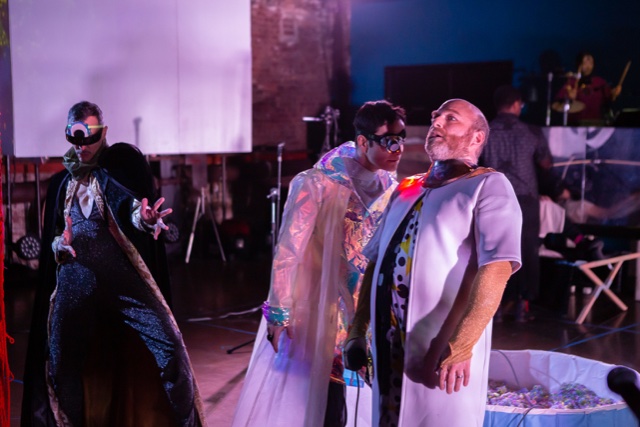 Mix of character are reflected in mix of costumes 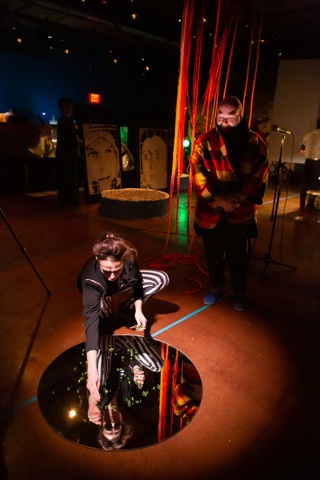 Reflections and colored spotlights move us out of space 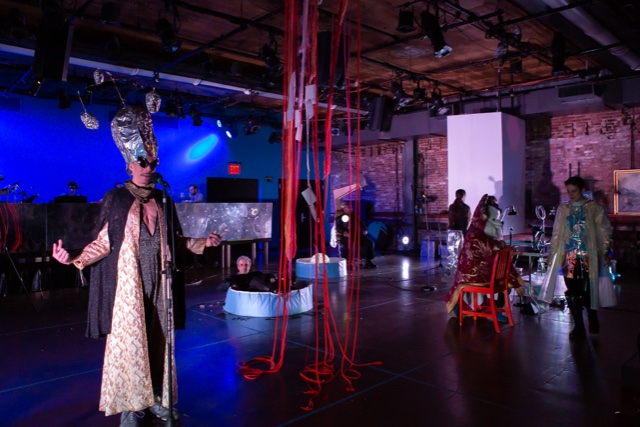 A priest, an astronaut, a poet. Who will show up next? 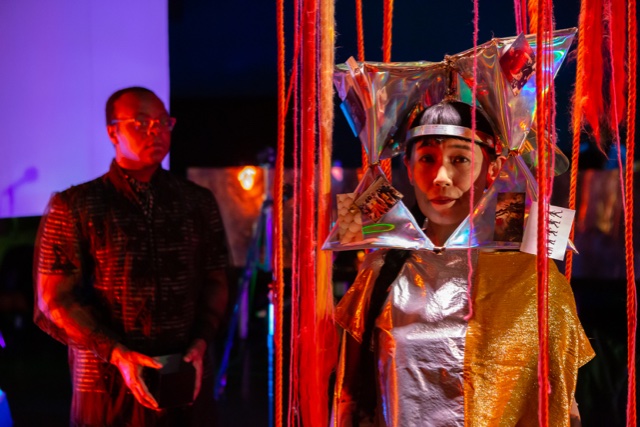 Silvery materials and tinfoil look like the music we are hearing 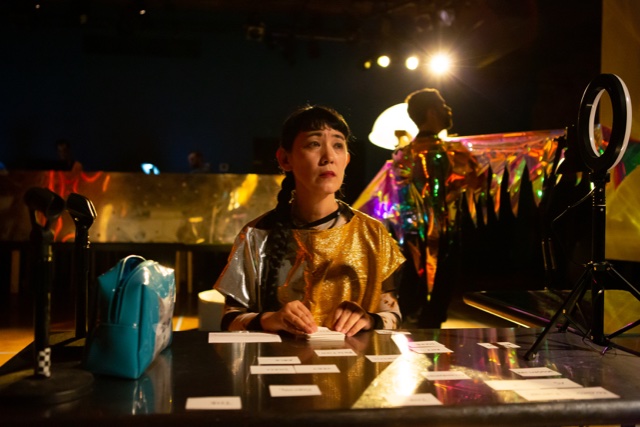 Paper moved like magnetic poetry. In the background, an Icarus-like figure with silvery wings 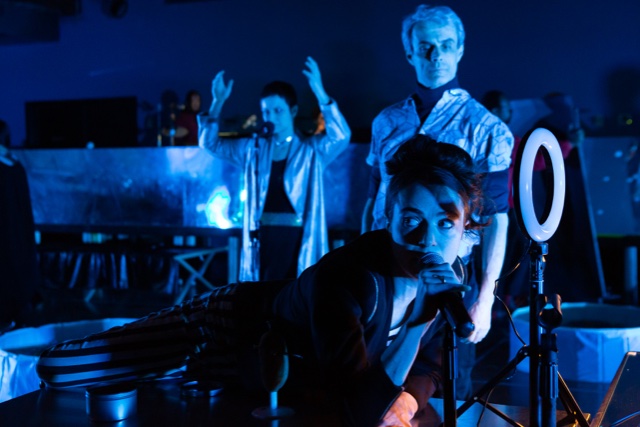 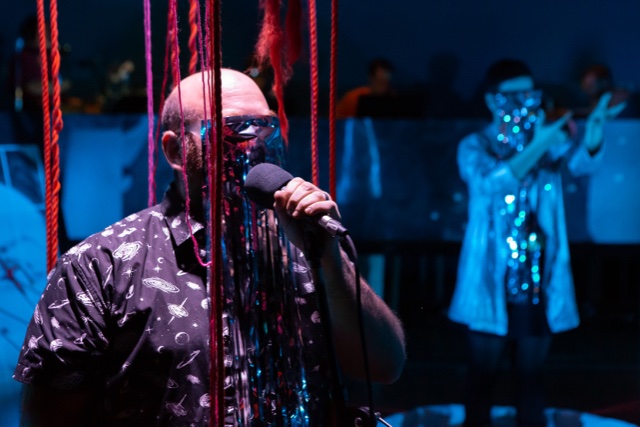 Singing from a space throne-room 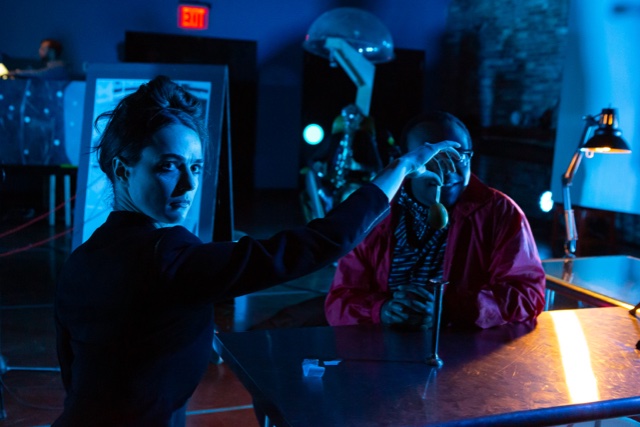 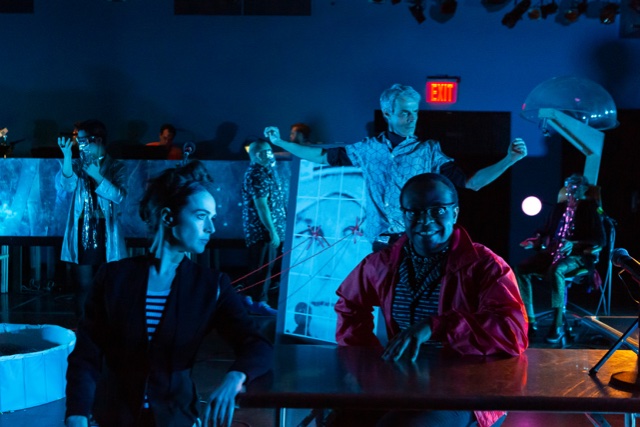 We are sometimes directly addressed

‘You Are Under Our Space Control’ is a utopian space-opera, a signal sent out to tremble and refract in an empty universe, a light focused on a radical future.

The Downstairs stage at La Mama is darkened.  People bustle around, cleaning equipment, moving it about, casting lights and cameras on it.  We the audience are not quite sure whether or not the performance has begun.  In fact, the minute we walk into the theater, we are in the drama.

It is the intention of Object Collection, the producers and creators, to keep the audience at high alert. Daniel takes a seat on the cosmic throne,  a cross between dental chair and space rocket.  The quotidian and the other worldly will be liberally mixed in music and action for the next hour.

Investing in space travel and astronauts, Kara Feely  re-envisions everyday life in the future. Familiar interfaces with clothing and pieces of paper that look like magnetic poetry to be moved at random seem strange and awkward. Travis Just's speech-song vocal parts are eerily lofted. Surprisingly glistening instrumentals are formed from flexing 808s, tinny objects, and a robot guitar.

John Cage's 1951 piano solo ‘Music Of Change’ hovers in the background.  Cy Roth's sci-fi weirdity ‘Fire Maidens From Outer Space’ (1951) also inspires.  Sun Ra and the cosmology of Russian poetics and philosophies are only a small part of the action. Interviews from real (and imagined) space travelers and astronomers are intermittently introduced.

The cast has an immediate and searing physicality. Allessandro Magnia uses gesture to attract and disorient at once. Avi Glickstein uses his voice in expected and unexpected variety. Costumes made from reflecting tinfoil feel texturally like the music.  They take us deep into a futuristic whirlwind. We wonder.