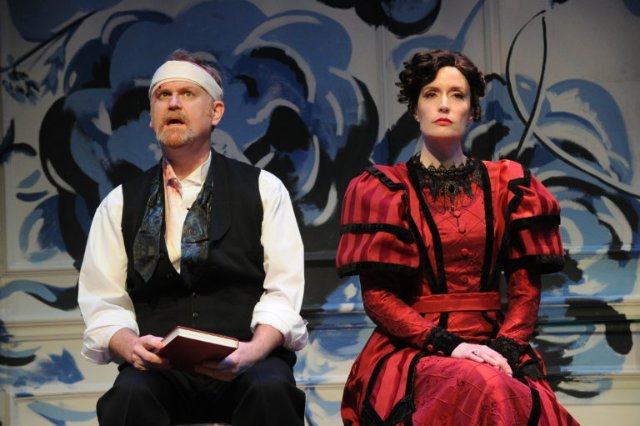 Rarely do playwrights produce sequels. Imagine, for instance, Death of a Salesman – The Return. But Henrik Ibsen’s A Doll’s House does present a special opportunity. When Nora walks out to leave Torvald at curtain fall, the closing door represents the end of a chapter. What better starting point for a new chapter? Although Ibsen did not elucidate on Nora’s life as a free woman, he might find Lucas Hnath’s A Doll’s House – Part 2 an intriguing continuation in the story of his decidedly independent heroine. Palo Alto Players offers a compelling production of this multiple Tony Award winning play.

Now, 15 years later, that same door is opened by the former nanny, Anne Marie. Ramrod straight Nora appears decked in brilliant red and black. The women exchange stiff pleasantries, and Nora avows “I’m a very different person than walked out that door.” The clumsiness makes it hard for the audience to interpret the tone of the narrative. But when Anne Marie soon shows her disgust with Nora by blurting out “s**t,” followed soon after by another “s**t” and then a “f**k,” you know that Hnath is not going for the arid style of 19th century Scandinavian drama. Although the narrative content keeps with the appropriate place and time, the tone embodies a contemporary black comedy element that holds the interest and animates the action.

The setup is that Nora has become a successful novelist, using a nom de plume. But her feminist screeds have upset staid society. An offended judge has investigated, digging up dirt and threatening to destroy her for her illicit activity. It seems that the divorce papers that Torvald was to file with the Records Office after she abandoned him never made it there, so Nora is not the single woman she thought she was.

Problem is – she engaged in many practices that are illegal for a married woman without the permission of her husband. She needs to reconcile her status or face grim consequences. Of course, one can imagine the warm reception she will receive when seeking a huge favor from the spurned husband.

The story plays out on set designer Christopher Fitzer’s stage bereft of traditional furnishings, as Torvald had disposed of anything associated with Nora and continues to confront emptiness. Although strong blue and white patterns adorn the wall, only two clear plastic chairs offer respite in the inhospitable parlor. Here the battles will be fought between Nora and Torvald, between Nora and Anne Marie, and between Nora and her young adult daughter Emmy.

Gabriella Grier portrays Nora. Her posture suggests her steely resolve, and while she is not without charm, Grier deftly affects an admirable yet largely unsympathetic character. Her Nora has wants, but she either has or offers nothing to give. She is a poster child for those who depict feminists as cold and ruthless.

As Torvald, Michael Champlin at first seems too timorous and nebbishy. But he quickly grows on you, and his characterization works well, not as a man with cruel and self-serving intent, but as one who is oblivious. Unlike Nora who can emotionally repel assaults, you can feel the pain of Champlin’s Torvald. When he reads aloud the description in Nora’s book about the character who represents him, he reveals his disbelief that he could be seen as such an ogre. His contrition for some of his actions seems real and perhaps his willingness to change.

As a family retainer with no outside options, Anne Marie is caught in the middle. Nora tries to forge an alliance with her despite the old woman’s vulnerabilities and complete reliance on Torvald’s continuing generosity. Judith Miller totally delights with her spot-on performance as the craggy and crabby Anne Marie.

Emmy appears late in the action as a daughter who doesn’t really know her mother. Yet Nora’s DNA seems to have passed on to her. Katherine Hamilton captures Emmy’s essence – both her pleasing manner and her manipulative way while she looks out for number one.

The playwright has crafted a complex scenario in which four people having separate interests set about to solve a mighty problem. Unfortunately, every option has defects, with devastating impact on one or more of the principals. Another interesting aspect of the narrative concerns the viewers’ sympathies toward Nora and Torvald, each of whom are flawed, yet decent in their own right. Those looking back at Ibsen’s work may have disdain for Torvald that is difficult to revise. But will either or both of these characters achieve redemption when the curtain falls again? It’s worth finding out.