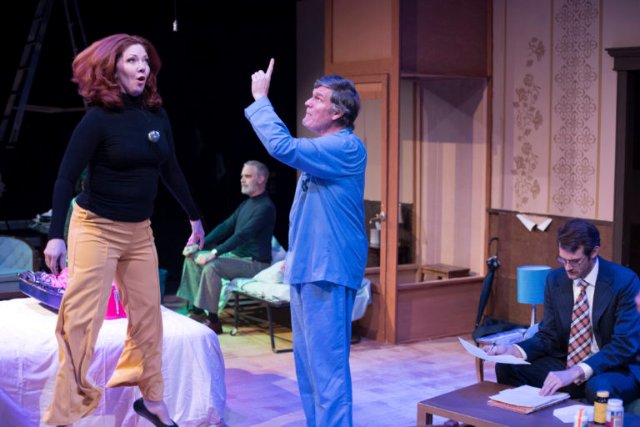 Betsy Kruse Craig as Lizzy, David Boyll as Mark (rear), Todd Wright as Roland, Max Tachis as Watson. Photo by Michael Kruse Craig.
English playwright Alan Ayckbourn has secured a place as one of the most successful and prolific comic writers of modern time. Though farcical elements are common to many of his creations, Taking Steps from 1979 represents his only plunge into pure farce. Pear Theatre’s energetic and highly-skilled production will tickle the fancy of those who favor that style of humor, though detractors may find it overwrought, silly, and dated.

Perhaps Ayckbourn’s most compelling stage innovations concern his clever use of spatial relationships and time. In The Norman Conquests trilogy, three separate plays take place around one house at the same time and with the same characters. Exits in one play are often corresponding entrances in another. House and Garden present a greater challenge as the two plays share the same cast and are played in two different theaters simultaneously! More about space and time later.

In Taking Steps, the central premise concerns a middle-aged, but recently-wed couple, Roland and Lizzy. They are set to purchase the English country home that they have been renting, which prompts the arrival of their solicitor (attorney) Watson. However, Lizzy has decided that this marriage was a bad decision and has left a note to say that she is exiting. Massive confusion ensues. The note becomes interpreted and attributed incorrectly; wrong couples end up in bed together; sleeping pills cause havoc; doors slam; and all carry on hysterically.

Taking Steps offers its own unique spatial conceit, one with considerable charm but that takes a little getting used to. The action occurs on three floors of the dilapidated Victorian house, but those three floors share the same stage space. Often, characters on different floors are on the stage at the same time, carrying out unrelated activities and crossing paths, oblivious to one another. In one clever set up, two characters state that nothing shall come between them, while a character from another floor and unseen by them is standing between them. To add to the fantasy, the stage is fringed by “stairs,” which are steps drawn on the floor that the characters nimbly trip-trip-trip up and down when moving to different floors.

All the roles are played with great gusto in enthusiastic, farcical style. At the center is Roland, whose wealth derives from manufacturing buckets, played with confidence by Todd Wright. Roland is commanding, blustery, and blithely self-confident as he barks demands and drivels on. His schtick is that seemingly every few minutes he insists that guests join him in yet another drink – a Black Velvet here, a single malt Scotch there, and of course, a Bloody Mary in the morning.

Max Tachis plays the nervous and bumbling Watson. Tachis’s flailing long limbs, gaping mouth, and looks of shock and surprise particularly suit the farce. His stammering and stuttering complete the package. Lizzy rounds out the main principals. Playing the former end-of-the-chorus-line dancer, a delightful Betsy Kruse Craig flounces about in delusion practicing her ballet movements, and repeatedly insisting that as a dancer her sleep can’t be interrupted. Meanwhile, she grapples with indecision about the idea of leaving Roland.

The playwright doesn’t merely intend to tickle the funny bone but for the humor to penetrate. The play’s very title refers not only to walking the stairs but to the life changes of new homes and dashed relationships as well as testing things out and Lizzy’s dancing. Ayckbourn also takes jabs at society and its conventions. Troy Johnson’s direction hits all the right notes for this type of theater, with brisk action, crisp dialog, and physical comedy. The intricacy of Megan Souther’s lighting and David Hobbs’s sound contribute to the fine overall production values. If English farce is your cup of tea, stop in for a healthy serving.

Taking Steps by Alan Ayckbourn is produced by Pear Theatre and plays on its stage at 1110 La Avenida Street, Mountain View, CA through February 9, 2020.