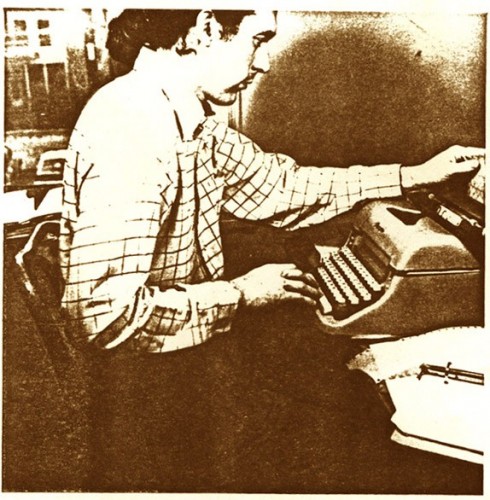 The artist typing his art. 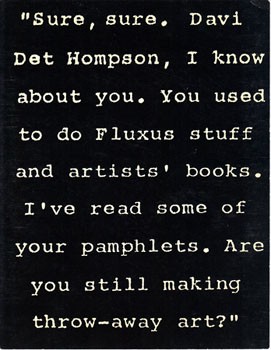 Part of the gallery exhibition. 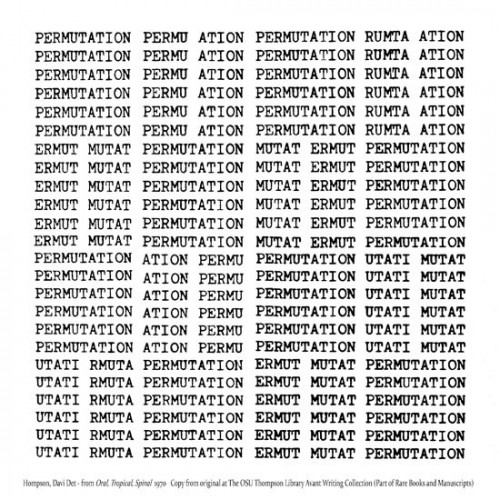 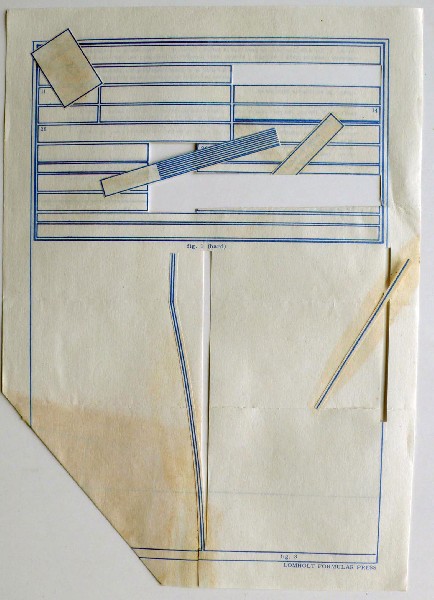 He was a member of the international Fluxus movement. 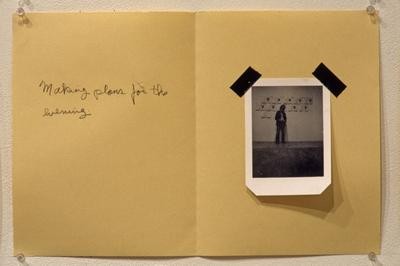 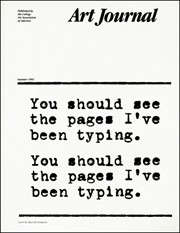 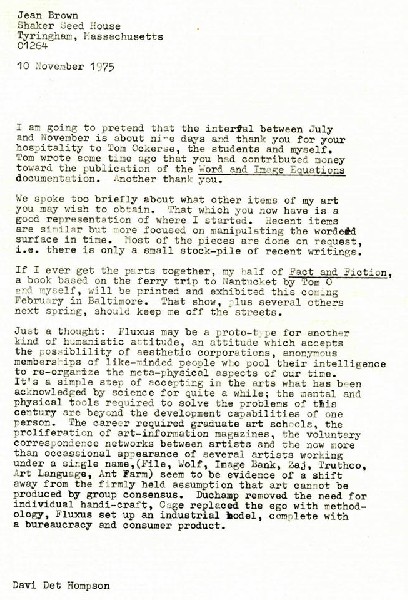 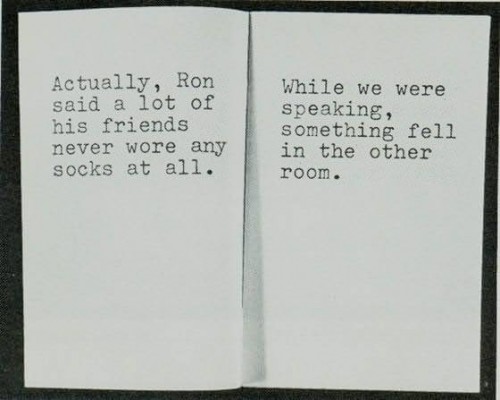 Three years after Davi Det Hompson died in 1996 at the age of 57, five Richmond (VA) arts organizations mounted a simultaneous, citywide memorial exhibition, Davi Det Hompson: Just Out of Reach. Organized by his friends and colleagues, this larger than life testament still managed to present only a representative slice of his diverse output. Over the course of a 30-year career, Hompson had more than 30 solo exhibitions, appeared in 250 group shows, and published page-specific art in 50 different periodicals--on six continents and in more than 30 countries.

A respected young American member of Fluxus in the late 60s and early 70s, Hompson’s initial successes included a solo exhibition of sculpture and prints at Alexander Iolas Gallery and his inclusion in canonical exhibitions such as Art by Telephone at MOCA Chicago, the Whitney’s Ray Johnson: New York Correspondence School Exhibition and Yoko Ono’s This Is Not Here. He cemented his international reputation in alternative art circles in 1973 as the sole organizer of the improbably successful avant-garde exhibition (for the Anderson Gallery at Virginia Commonwealth University in Richmond), An International Cyclopedia of Plans and Occurrences.

Hompson is still best remembered here and abroad, however, for the book, mail, and page-specific art he made in the 70s and exhibited everywhere from Tokyo to Liberia. His most public success came in the mid-80s in New York when, as co-publisher (with Cliff Baldwin) of the high-profile, oversize poster periodical Aqui!, he pasted work by the likes of Barbara Kruger, General Idea and Gilbert & George, as well as his own, on walls all over lower Manhattan. By the late 80s Hompson had turned—as conceptualists and language artists so often incongruously do—to painting, and it is this work, abstract painting-sculpture hybrids, that was being exhibited in museums and galleries at the time of his premature death.

Sure Sure Davi Det Hompson: 1976-1995 is an unconventional retrospective organized from the artist’s estate with the generous assistance of his wife Nancy Thompson and many members of the Richmond art community. The bulk of the exhibition contrasts two bodies of seemingly unrelated work: 21 booklets of found quotations from 1976 to 1980, exhibited on sign stands and arrayed to resemble a crowd of chit-chatting gallery goers, and 27 abstract, pseudo-primitive, pictograph and symbol suggestive paintings made between 1987 and 1995, in which Hompson seems to replay the entry of language into painting and conflate it with the quiet exhaustion of painting in single-color abstraction. These two groups of objects confront each other, playing the roles of art and audience, within the rubric of a New York gallery exhibition opening. The subtitle of one the booklets, “O,, hints at the possible relationship between them: “Sixteen plucks on a string attached between the base of the viewer’s optic nerve and the reader’s larynx.”

Also on view, by way of introduction, are a self-satirizing print Hompson made for his last New York solo show at Barbara Moore’s Bound & UnBound in 1991, a portfolio of self-portrait prints captioned in diacritically-hyper Vietnamese, and one of his text-based slide shows. Further bridging the gap between what is supposed to be seen and heard, spoken and pictured is a kind of sacred ur-text Hompson made from five enormous sheets of half-inch thick recycled rubber that look like chunks of asphalt: on each page of which in highway yellow is stencil spray-painted the urgent-seeming “MOLLA.” MOLLA. MOLLA. MOLLA. MOLLA. MOLLA.

The latest in a series of historically significant exhibitions mounted by ZieherSmith, Sure Sure Davi Det Hompson: 1976-1995 is curated by Dakin Hart and coincides with an exhibition of Hompson's early works at Division Leap, an art bookstore and gallery in Portland, OR.