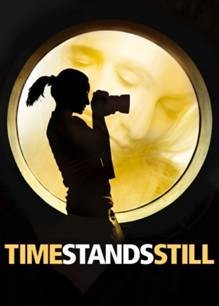 Widely hailed as one of the best new Broadway plays, Time Stands Still is the story of Sarah and James, a photojournalist and a foreign correspondent, who are reeling after a recent brush with death while on an assignment. Will their relationship of nearly a decade be more threatened by a traditional go at domesticity than the roadside bombs of Baghdad?

Barlow Adamson (James Dodd) returns to The Lyric Stage where he performed in The Scene, Arms and the Man, Private Lives, Red Herring, and Noises Off. His other local credits include Almost, Maine; Reckless; Fuddy Meers (SpeakEasy Stage), The Maiden's Prayer, A Month in the Country (Huntington Theatre), Dinner With Friends, The Norman Conquests (Gloucester Stage), The Real Inspector Hound (Publick Theatre) and The Swan, On The Verge (Nora Theatre). He is an artistic associate of the Mill 6 Collaborative, directing its productions of Bunbury: A Serious Play for Trivial People, The Monster Tales, and Shakespeare's R+J. Barlow will next appear this spring as H.M. in Underground Railway Theater's production of Remembering H.M.

Erica Spyres (Mandy Bloom) returns to The Lyric Stage after appearing in Big River last fall. Previous Lyric Stage credits include The Life & Adventures of Nicholas Nickleby, and Open House for the Boston Theatre Marathon. This spring, she will appearing in The Lyric Stage’s production of Avenue Q.  Recent credits include the premiere of Sense & Sensibility: The Musical ( Wellesley College ), Pirates! and Unknown Soldier (Huntington Theatre), Fringe Wars (Blue Spruce/Company One), Guys & Dolls (Tent Theatre), A Little Night Music ( Springfield Regional Opera), and The Light in the Piazza (SpeakEasy Stage, IRNE Award, Best Supporting Actress in a Musical). Additionally, Erica has sung jingles and starred in commercials for several markets, hosted What’s in Store for WBZ-TV, and is the Amica Auto Insurance online Coverage Advisor. Erica received a B.A. in Music from Drury University in Springfield , MO , where she studied voice, violin, and theatre.  www.ericaspyres.com

Mr. Margulies has won a Lucille Lortel Award, an American Theatre Critics Award, two Los Angeles Drama Critics Awards, two OBIE Awards, two Dramatists Guild Hull-Warriner Awards, five Drama Desk Award nominations, two Pulitzer Prize nominations and one Pulitzer Prize. His works have been performed on and off Broadway; at major theatres across the United States including South Coast Repertory, Manhattan Theatre Club, Primary Stages, Actors Theatre of Louisville, Long Wharf Theatre, Williamstown Theatre Festival, Old Globe Theatre, La Jolla Playhouse and Joseph Papp's New York Shakespeare Festival; and in Paris, London, Rome, Madrid, Tel Aviv, Amsterdam, Copenhagen, Sydney, Berlin, Vienna and many other cities around the world. Mr. Margulies has received grants from the National Endowment for the Arts, The New York Foundation for the Arts, and the John Simon Guggenheim Memorial Foundation. In 2005 he was honored by the American Academy of Arts and Letters with an Award in Literature and by the National Foundation for Jewish Culture with its Cultural Achievement Award, and was the recipient of the 2000 Sidney Kingsley Award for Outstanding Achievement in the Theatre by a playwright.

Theatre Communications Group has published seven volumes of his work. Dinner with Friends was made into an Emmy Award-nominated film for HBO, and Collected Stories was presented on PBS. Currently, he is adapting the novel Middlesex by Jeffrey Eugenides into an HBO series.

Mr. Margulies is an alumnus of New Dramatists and serves on the council of The Dramatists Guild of America. He is an adjunct professor of English and Theatre Studies at Yale University

Scott Edmiston (Director) returns to The Lyric Stage where he directed Cat on a Hot Tin Roof, (2009 Elliot Norton Award for Best Director), Private Lives, The Scene, Miss Witherspoon (2007 Elliot Norton Award for Outstanding Production), and Lobby Hero with Jason Schuchman. Scott has directed more than 50 productions in Greater Boston at SpeakEasy Stage Company, American Repertory Theatre, Huntington Theatre Company, Opera Boston, the Nora, and Gloucester Stage, among others. Credits include: In the Next Room with Anne Gottlieb, The Light in the Piazza with Joel Colodner, The History Boys, Five by Tenn , Sunday in the Park with George, A Marvelous Party, Dinner with Friends, Betrayal, and Nixon in China. Four of his productions have received Elliot Norton Awards as Outstanding Production, and he has received three Elliot Norton and three IRNE Awards for Best Director. Scott is Director of the Office of the Arts at Brandeis University .