Feeding the Dragon at Hartford Stage

Written and Performed by Sharon Washington. 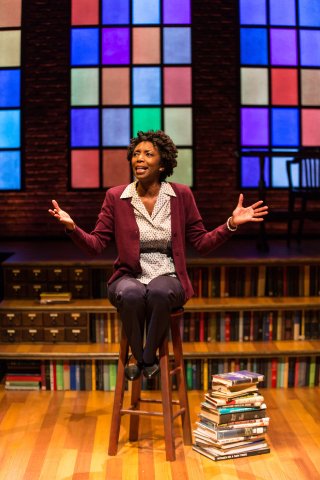 One person shows may seem easy, but are notoriously difficult. Not just in the performing but also in the creating.  And when the performer is also the creator of the piece and it is biographical, the difficulties seem to multiply. The selection of the material, the editing and the drama is complicated by the fact that it is true and the author/performer is emotionally connected to the people and events.

Both the plusses and minus of this are on display at Hartford Stage’s production of Feeding the Dragon, written and performed by Sharon Washington.

Washington’s childhood was unusual due to where her home was located: in a custodial apartment in the St. Agnes branch of the New York Public Library on the upper west side of Manhattan. Her father was the custodian one of whose duties was to keep the old, coal operated furnace going: thus the expression “feeding the dragon.”

It was only for four years but these were obviously formative years. Unfortunately she never actually mentions how old she was during these years (1969-73) but from some of the episodes she recounts she probably was pre-teen or early teens.

In interviews, she has said that people encouraged to write her story because of the unusual location of the apartment. But certainly there is more that she wants to tell: the story of her working class African-American parents and their struggles; her sense of self as an African-American woman, and how she became an actress.

In this 90 minute play which will be heading to Off-Broadway’s Primary Stages, she is only partially successful. Leaving the theater, I was still puzzling over half told memories than left us hanging and things she never addressed at all.

She talks little about reading in the empty rooms of the Library after it had closed. But what books did she consume? How did they affect her? They obviously spurred her imagination but little is said. Did she have other adventures in the multiple rooms of the library?

The same thing happens when she tells a story about discovering some wrapped boxes in the bottom of her mother’s closet. The contents are unusual and puzzling. Later in the piece she briefly refers to it, but there is never a conclusion to the story. Why did her mother have those things? How had she gotten them? What was the significance?  I thought of multiple possibilities but would have liked to know which was true. It’s hard to believe that Washington never spoke her mother about it.

Focus is one of the problems with this piece; what is the story she’s trying to tell? It goes in several directions, but each seems unsatisfying. It’s not told from the point of view of her as a child, but it doesn’t really bring the insight of her adult self.

The ending seems like a trite summing up of platitudes.

Washington is a fine actress, but as she plays the multiple people in her story, including her mother, aunts, grandmother and others, her portrayals are good, but not great. These are people she knows well, so you expect her characters would be fuller.

The set by Tony Ferrieri is simple, but suggests a library with the high stained glass windows and the card catalogue drawers creating the steps. Ann Wrightson has done a fine job with the lighting and Maria Mileaf’s direction injects both movement and variety to it.

But at the end, I looked at the tag line on the poster “her story speaks volumes” and realized that these were very incomplete volumes. So much more should have been possible.

Posted courtesy of Two on the Aisle.
Back to Front Page Section Home