Professional Wrestling as a Satiric Parable 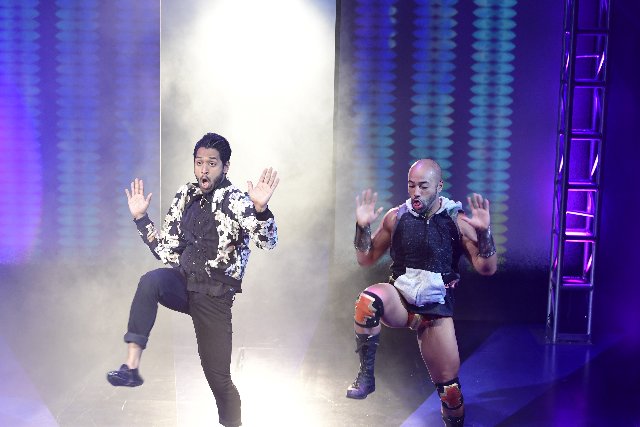 (Photo courtesy of Miami New Drama) Raji Ahsan and Garrett Turner appear in a scene from the scorching The Elaborate Entrance of Chad Deity. 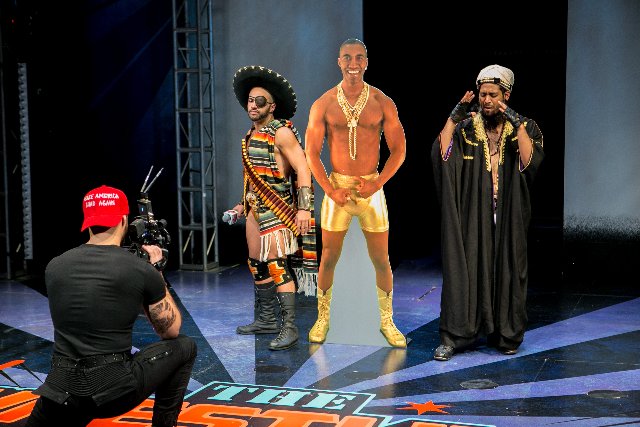 (Photo courtesy of Miami New Drama) A poster of Chad Deity shows he's more of a product for profit than a person. Flanking the poster are Pierre Jean Gonzalez as Macedonio "Mace" Guerra (left) and Raji Ahsan as Vigneshwar Paduar. 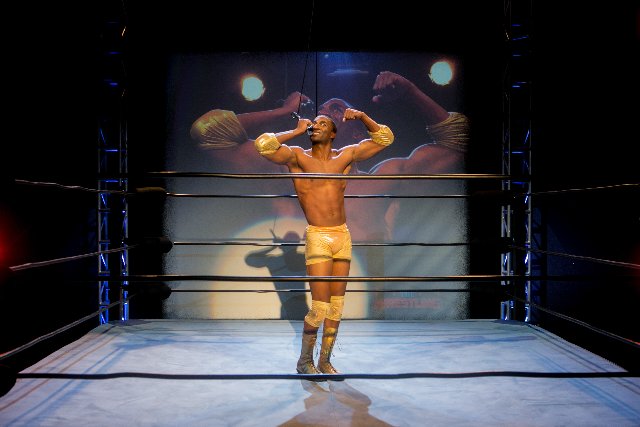 (Photo courtesy of Miami New Drama) Chad Deity (Garrett Turner) takes in all the fame and love thrown his way.

The Elaborate Entrance of Chad Deity, a powerhouse play by Kristoffer Diaz, might be unlike anything you’ve seen in live theater.

This electric, can’t-miss, visually enthralling theatrical piece will keep you hootin’ and hollerin’ (yes, it’s allowed, even encouraged). You’ll feel as though you’re a spectator at a high-stakes wrestling match.

As you enter, multiple video screens surround the stage.

Live images change from one wrestler to another. Each is strutting his stuff by flexing muscles, making faces and mouthing words that probably amount to trash talk. Information such as the wrestler’s weight, height and fun facts appear alongside his name.

Orange and blue lighting bathes the stage. We hear such songs as “The Final Countdown,” “We Will Rock You” and “Jump Around.”

An usher distributes cut-out posters of Chad Deity. If you look up his last name, you’ll find words such as “god,” “goddess,” and “divine status.” You’ll quickly realize it’s no accident why Diaz picked out Deity as his title character’s last name.

Folks can experience this play, a Pulitzer Prize finalist, through Feb. 18. It’s playing the Colony Theatre in Miami Beach.

Deity comes to South Florida through a highly impressive co-production. The partnering companies are the relatively new Miami New Drama and the renown Asolo Repertory Theatre in Sarasota.

Diaz’s powerful and timely play is scorchingly funny. It’s a blistering wake-up call for those narrow minded and hate-filled enough to hold fast to stereotypes like an iron grip.

The Elaborate Entrance of Chad Deity has received several mounted productions . But in 2018, a time when racial strife, discord, hatred and hypocrisy reign particularly heavy, this satire is a play whose time is particularly due.

Through highly-physicalized wrestling action, Pitbull teeth-sharp words and stinging projections, the playwright achieves his desired effects. He delivers a combined sucker punch and superkick to racism and stereotypes. Diaz blindsides with a powerbomb the hypocritical, rich, ignorant and brash executives among us. You know, those who salivate at the sight of money at any cost.

It’s not just wrestlers that the playwright places in opposing corners. He also pits the championing of substance, teamwork and butt-busting effort against the worshipping of slick, flashy, charismatic figures. They tend to sit tight, pretty and benefit from the underdog’s dirty work.

Listen to Macedonio Guerra, also known as “The Mace.” He’s a Puerto Rican professional, undersized but good and hard-working wrestler. He isn’t the champion, though. That’s a title that belongs to Deity.

“Chad Deity’s muscles and money and elaborate entrance do not represent my American Dream,” Guerra tells us.

“The Mace” is our hero for the afternoon or evening of wrestling/theater. It’s easy to pull for him, thanks to the qualities with which Gonzalez imbues the man. Without coming across as mean or disgusting, the talented performer also invests “The Mace” with a versatile physicality and plenty of vocal intensity. He growls, flexes his muscles and moves around with verve and versatility. In doing so, he ensures the character is never static or boring.

As you watch Gonzalez disappear into his character, you can’t help but notice in his performance the grit of those tenacious immigrants in Hamilton. In his own words, “The Mace,” is basically saying “Immigrants, we get the job done.”

One way that competitors such as “The Mace” gets the job done in wrestling is by making lesser wrestlers (but more slick figures), such as Chad Deity, look like champions. “The myth that is Chad Deity,” may get all the credit and adulation. However, without Macedonio Guerra’s work in the trenches, Deity doesn’t wear a golden championship belt.

“In wrestling, you can’t kick a guy’s ass without the help of the guy whose ass you’re kicking,” Guerra explains to us. “I’m doing what I can to make him look like the all-world fighting machine he’s made out to be.

“It is teamwork, even if I’m the only one on the team doing the work. And that, ladies and gentlemen, not the storylines, not the competition, not the dazzling physiques or the pretty colors or the elaborate entrance of Chad Deity is the reason that professional wrestling is the most uniquely profound artistic expression of the ideals of the United States.”

Professional wrestling is also an “art form,” “The Mace” tells us. He adds it’s not just a showy spectacle with muscles and money at the center, as one character makes it out to be.

That character, who proudly professes to prize with preacher-like fervor the country’s ideals, is Everett K. Olson (“EKO). He’s the Caucasian owner of THE Wrestling, the fictional company in the play.

You’ll want to body slam Olson yourself after beholding Durkin’s eyes. He often narrows and lowers them in contempt. Listen to his wicked laugh, and you’ll also feel like charging the ring, wishing to wipe that smug scowl off his face.

As played by Durkin, Olson’s face drips with sarcasm and arrogance. These qualities might call to mind a plantation owner from the Civil War era lording over his slaves. Except this play is set in present-day New York. EKO speaks with a heavy New York accent that might call to mind a mob boss.

Part of what makes EKO so despicable is his hypocrisy. He uses for his own profit those whom he stereotypes, hates, yet knows nothing about.

EKO refers to Muslims as “Mooslims,” pronouncing the first part of the word as though he were making a cow’s signature noise.

The outwardly spick and span CEO says of a Muslim wrestler brought on to THE Wrestling’s team, “The kid is supposed to be this militant cave-dwelling fuck-damentalist, right?”

Durkin’s EKO asks this question in such a harmless, innocent-sounding voice, you’ll also want to knock the character out with the Powerbomb and Superkick.

In a multifaceted portrayal, during which he performs a rap that would make Lin-Manuel Miranda proud, Raji Ahsan as Vigeshwar Paduar (known as VP) looks on amusingly at the pride-filled EKO. The wrestling company’s owner dismisses Paduar as some fundamentalist.

In fact, THE Wrestling’s brash owner has come up with a character for Paduar.

“What wrestling needs right now is a Muslim fundamentalist!,” EKO says. Into his Bluetooth, he adds, “Where are Muslims from? A cave, right?”

But much to the wrestling company owner’s surprise, Paduar speaks with a casual, care-free street lingo (Ahsan nails this in his performance).

EKO has plans for VP and “The Mace.” He makes them take on the personas of terrorists. It’s simple: People will start hating them, adoring (worshipping?) Chad Deity and arrive in the arena in droves. What does that mean for EKO? More money, of course.

And so, “The Fundamentalist” (VP) and “Che Chavez Castro” (“The Mace”), a Mexican revolutionary with ties to Al-Qaeda and Hamas, get to work under Deity’s orders.

Deity: …The Mexican and the Middle Easterner come to the States and they want to bring us down from the inside –

EKO: So they figure the best way to do that is to start at the top with a major symbolic victory.

Deity: So they come to THE Wrestling –

EKO: They come after Chad Deity

Deity: They come after the heart of America.

To EKO, Deity represents a big piece of that heart. Yet, as “The Mace” notes, there’s supreme irony that EKO has built his company around Deity – an African American.

As a black man, this charismatic wrestler might be the last person his boss would hang out with after hours. But at least on the clock, Deity is hardly a “N—-” in EKO’s eyes. He’s a money-making machine for THE Wrestling.

Garrett Turner radiates charisma and confidence that borders on egotism as Deity. However, when it comes time for him to turn intense, the actor turns on the heat. He conveys a menace that makes you want to get out of his way.

All the actors who play wrestlers are obviously physically gifted, displaying nifty dancing and wrestling moves.

None of the performers are wrestlers, though. Kudos are due, therefore, to fight director Michael Rossmy. He helps create the illusion that the kicks, punches, chops and slams are real. The performers, to their credit, convincingly writhe in pain.

Director Jen Wineman places equal emphasis on physical action and dialogue. She also paces the production well. Wineman helps the actors find just the right satiric tone for this stinging play. The director has several surprises in store for audiences. For example, you never know from where an actor will enter. He might just address you in this production. Such unpredictability mirrors that of our world today.

Playwright Diaz has written The Elaborate Entrance of Chad Deity in a sophisticated manner, but tends to be a bit wordy. Still, it’s accessible and a crowd-pleaser. I found a metaphor about raisin bread a bit out of place and confusing, however. The play, and this production, tend to be short on subtlety and nuance. But in the world of professional wrestling, it’s a challenge to inject those qualities.

Quibbles aside, The Elaborate Entrance of Chad Deity should be on all theater lovers’ list to see.

You’ll be hard pressed to find a play as unique and daring as this one.