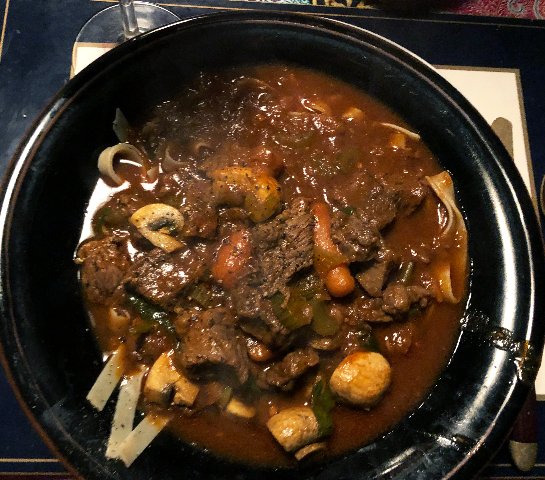 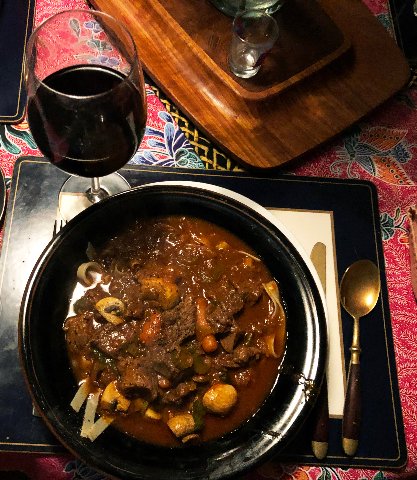 With a nice glass of red wine. 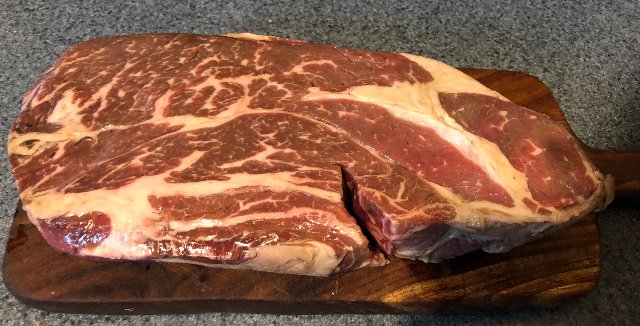 The chuck roast was hardly cheap. 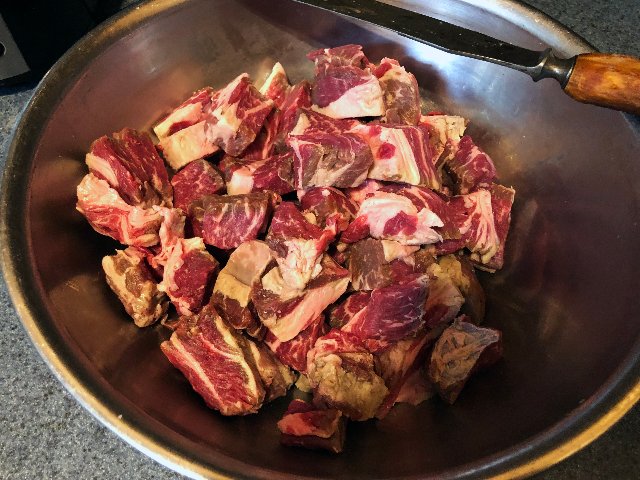 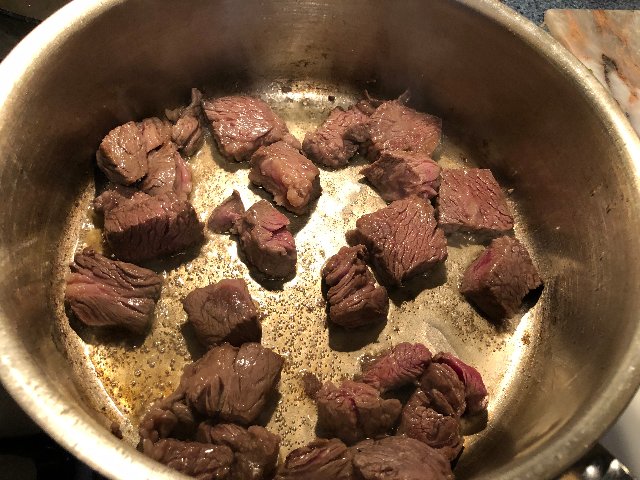 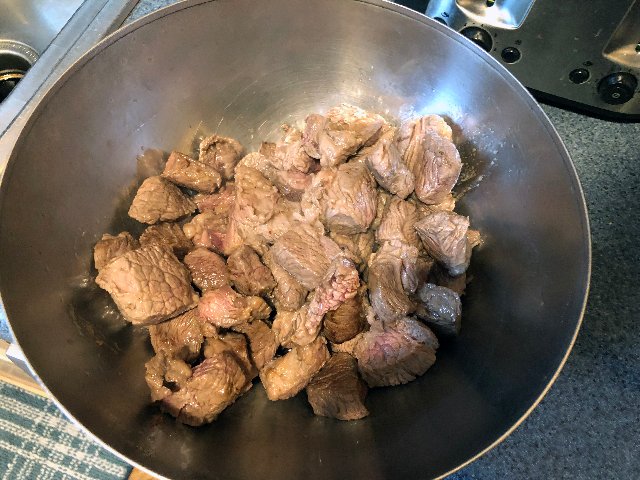 Ready to be mixed. 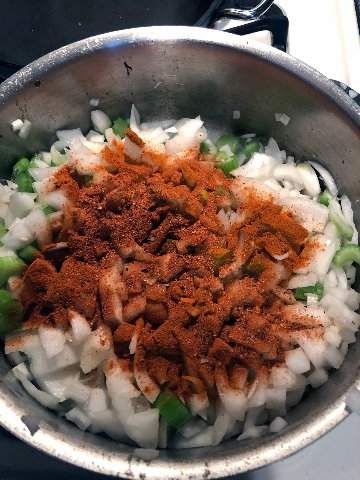 Two kinds of paprika and caraway seed added to onion and celery. 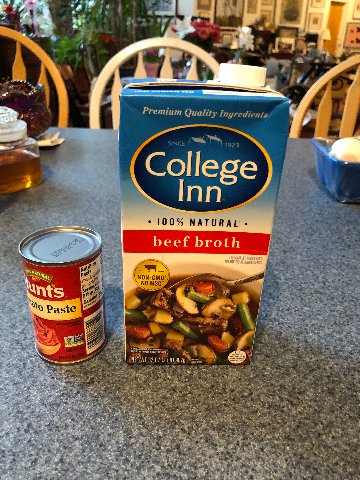 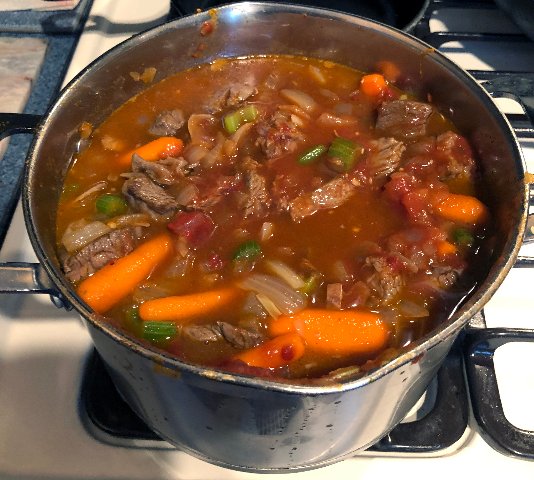 After two and a half hours a savory pot of Goulash, Hungarian or otherwise.

Hunkered down there was snow all day. Two feet in Boston. How pleased we are no longer to be in East Boston with its barrels, lawn furniture, and detritus marking shoveled spots. You can get wacked over a parking spot.

Even in Summer, some Eastie made men put out their place holders with not a flake in sight.

Here in the Berkshires we got off relatively lightly with a late January storm.

We stocked up with groceries to hunker down for the duration.

The best thing about January is that it’s almost over and from here we start the long slide into spring.

What better time to rattle the pots and pans with a sense of savory adventure?

When trying a new recipe I look them up on line and check out videos. There are helpful posts in the NY Times but they charge extra to look at food stories. Not that much, so I sprung for it at half price for a year. It’s fun to look at them even though most are above my pay scale.

Looking at a lot of recipes and videos I explore commonality. What are the ingredients and techniques that they agree on as defining and essential? How to add or subtract ingredients and steps?

For the very first time I took on Hungarian Goulash. It’s a standard menu item at the Austrian, Haflinger House in Adams. Their version comes in a metal pot with meat and dumplings in a thick sauce.

The essential ingredient is paprika. For Christmas gift giving I bought a ton of tea and spices from Cape Cod Spice in Truro.

Measuring out baggies I felt like a pot dealer. It was one stop Christmas shopping and all our friends and neighbors got a taste. Of course, I made a selection for ourselves which I morphed into a present under the tree. We are enjoying all the teas of which a favorite has emerged as Pan Fried Green Tea.

The order included authentic Hungarian Paprika.  We already had Smoked Paprika which is generally described as Spanish. On a whim, my order included Syrian Baharat which I had never heard of. It has a wonderful spicy aroma and I have been adding it to just about everything including stir fry. It blended quite nicely with the two kinds of paprika. Several recipes called for caraway seeds which I ordered from Amazon. They are best crushed or chopped.

Potentially, I served my dinner to a very discerning critic. Astrid swears that she has made goulash for us but I don’t recall. It was a staple growing up in Post War Germany as it called for cheap, tough beef. “Everyone in Germany eats Hungarian Goulash” she told me. Undaunted, I forged ahead and discussed my plan.

My version includes carrots, celery and at the end, mushrooms. I bought sweet red pepper but didn't use it. Apparently, authentic Hungarian Goulash does not include vegetables. So she predicted that my concoction would be more like a stew or soup. Whatever.

Potatoes and dumplings are other options for ‘authentic’ goulash. But I’m not Hungarian so what the heck.

There were a number of suggestions for what beef to buy but the most common was chuck. To cut yourself into bite sized cubes. By no means buy stew beef. One chef described that as lousy meat the butchers are packaging to get rid of.

By luck, at Big Y I found a two pound, Black Angus, chuck roast half off. It was still twelve bucks which ain’t cheap. Some folks use hamburger which is apocryphal.

In three batches I browned the meat in a skillet. The same pan is used for a large amount of onion. I diced two large Vidalia onions which lent a nice sweetness. To this I added three chopped sticks of celery. After this reduced and started to soften I added two generous teaspoons of Hungarian and one of Smoked Paprika as well as caraway seeds. Then a few good shakes of baharat. I should have added a couple of bay leaves but forgot.

When the onions were caramelized I added them to the beef in a large bowl and tossed them thoroughly with a nice bunch of bite-sized carrots.

This was all put into a medium sized pot. A crock pot is an option. To this was added beef broth sufficient to cover the mixture. A can of tomato paste was folded in. Fresh or diced canned tomato is an option. Some chefs do not go with tomato. A Hungarian artist friend uses turmeric and cumin instead of paprika.

The pot was brought to a boil and then lowered to medium low heat and simmered for two and a half hours. The wonderful aroma filled our loft. Every half hour I stirred and tasted. It took that long for the meat to become fully tender.

Cooking down the onion enhances and thickens the sauce. Be sure to use lots of onion. For the last lap I added mushrooms which gave another dimension to the dish. No recipe called for them but I love mushrooms in everything.

By now the kitchen was a war zone in the tradition or my father, a fine cook, before me.

The difference is that I do the cleanup. Like Dad, I only cook now and then and make it into a big deal extravaganza.

Before plating, Astrid made gluten free, broad egg noodles. She used half the box so we can make fresh noodles for the next meal.

Being a weekend night I treated myself to a nice red wine. The Goulash was so delicious that we both ate more than enough. In that sense it seems that my Hungarian Goulash was quite authentic. Astrid, a tough food critic, gave it two thumbs up.