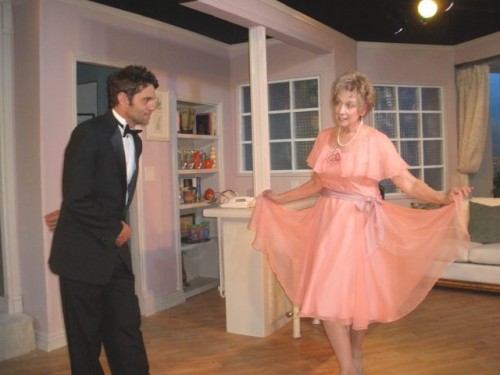 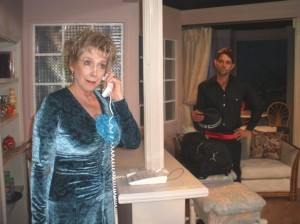 The company is now in its second year. 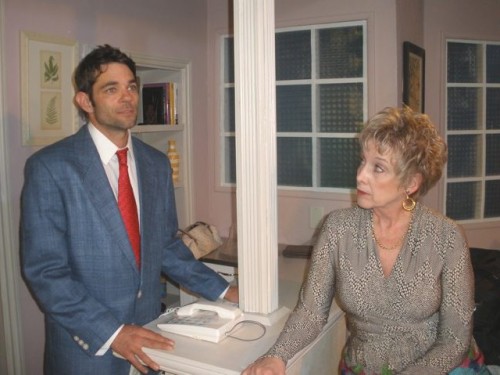 An evening of heart warming theatre.

The current production at the cozy (88 seat) and intimate venue is the thoughtful and insightful comedy/drama “Six Dance Lessons in Six Weeks”, written by Florida-born playwright Richard Alfieri, and directed and choreographed by Ron Celona.

CV Rep now in its second season in its new theatre digs at The Atrium, in Rancho Mirage, is building a reputation as a “go to” theatre for actors who like CV Rep’s two- hander format.  The previous six productions over the last eighteen months have been award winning and well-done productions – all selected and directed by Celona.

Now comes “Six Dance Lessons in Six Weeks” starring Bobbi Stam as Lilly Harrison; and Sean Galuszka as Michael Minetti.  Their story is a light dramedy, with poignant underpinnings, about a relationship between the widow of a Southern Baptist minister and her gay dance instructor.

Can one imagine a more emotional and polar-opposite minefield to navigate, even in 2013?  However, it’s not a Red state/Blue state type of confrontational and/or generational encounter we’re dealing with here.  Alfieri’s play and his characters are all too human to be so callously pigeon-holed.  Yes, it’s easy to mis-communicate and form opinions and impressions early on.  However, their initial antagonism gives way to compassion as the two swing dance, tango, foxtrot, waltz, and cha-cha- into a genuine friendship.

Lilly, is the epitome of a South Carolinian widow who retires to Florida.  At first she is guarded and wary of strangers.  When Michael appears at her door ready to give her the first of the dance lessons she ordered, his coarse language and his breezy manner are very off-putting to a cultured, Southern, senior citizen.  She begins to have second thoughts about continuing the lessons at all.

Michael realizes that perhaps, he’s gone a little far and too fast for Lilly to be comfortable, and quickly retreats to a neutral corner and a comfort zone where both parties can recalibrate.  But, Michael has his quirks, hang ups, and demons too.

Bobbi Stam’s Lilly takes the stage with confidence and delivers a finely nuanced portrayal of a person who learns, not only things about herself, but gains insight into the plight of others.  The on stage chemistry between Lilly and Michael builds slowly in Act I to a most satisfying ending in Act II.   Stam’s overall effort is a little polished gem of a performance, and she’s a good dancer as well.

Sean Galuszka’s Michael is nicely drawn and one can really feel his discomfort, at times, as a person who is not sure if he really likes himself.   He allows us to peek beneath all of Michael’s self-deprecating, and wisecracking humor, to reveal a basically nice person who cares about others but has a hard time displaying his feelings.  The dance sequences with Lilly, are a nice touch thanks to the choreography input of director Celona.

In the technical department talented Set Designer Jimmy Cuomo continues to top himself by delivering one gorgeous set design after another.  His “Dance … Lessons” design is spot on as a Florida beach condominium.  And Stuart A. Fabel’s lighting designs paint the tiny on stage areas with just the right amount of light; allowing us to appreciate the lovely costume designs of Aalsa Lee.

CV Reps production of “Six Dance Lessons in Six Weeks” is a heart-warming play that is sure to please everyone who sees it.  Remember, one can’t know the book just by its cover.  For reservations and ticket information phone 760-296-2966 or go online to www.cvrep.org.