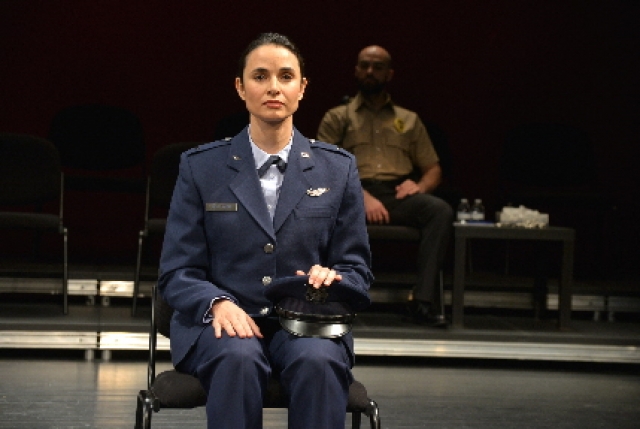 As the riveting, disturbing and heartbreaking play “Terror” illustrates, in our post-Sept. 11 world, black and white morality can blow up in pieces, leaving lots of grey – just like the shattered, shot-down civilian commercial jet at the center of the new play, leaving shards and grey smoke.

The articulately-written play provokes thought and spurs discussion while avoiding material merely meant to shock. Thankfully, there are no projection clips of war or terror attacks, which we’ve seen too often on television to the point that we’re numb to such images.

While you’re a paying audience member, your participation is essential. You decide the fate of the defendant by casting a ballot. Is she guilty of the murder of 150 people – including a 4- year-old child, who was on board a flight from Miami to Los Angeles? The actors play out the ending according to how the audience votes.

In this courtroom drama, Air Force Lt. Diana Salazar, a military pilot, has shot down a the plane with 164 people on board. Hijackers have commandeered the aircraft and plan to fly it into Atlanta’s Turner Field, where the Major League Baseball Braves play. There are 50,000 people watching the game in the stadium.

Salazar, flying alongside the hijacked plane, doesn’t want to see so many spectators die.

The play raises questions: Are the lives of 50,000 people more valuable than 164? “Life cannot be measured in numbers,” one of the characters states. “Humanity is not a market.”

The play, which lends equal weight to Salazar's argument and that of the prosecution, leaves us with much to ponder before we cast “guilty” or “not guilty” votes.

Evidence, for example, is presented that culpability lies not only with Salazar’s action, but the action (or inaction) of military officials. Did Salazar, who never denies killing the people on board, listen to her superiors before firing the fatal shots?

Compounding the problem for the court is that “(the) law and personal morality must be kept separate.”

The play is presented on a stage which looks like a realistic courtroom, complete with a seal and uniformed officers. Some audience members sit on stage, in an arrangement that suggests they are real jurors. It’s a shame we can’t all sit on stage, but the word is there’s only so much space on the Colony stage.

The roughly two-hour play is directed with assurance by Two-Time Tony-Award-winning director Gregory Mosher. He’s helped the cast disappear into their roles, portraying the characters with astonishing spontaneity, realism and nuance.

The production includes Mia Maestro’s self-confident, honorable Salazar, who could convey a bit more remorse to enhance her humanity; a forceful, assured but not overzealous Pascale Armand as the prosecutor; a sincere, eager Peter Romano as the defense attorney; Rita Joe as a grieving witness filled with palpable anguish and disdain for Salazar; Gregg Weiner as an intense, alert, seemingly dutiful military officer and Maria Tucci as a wise, fair judge.

Hopefully, these talented folks comprise one the first of many more American and foreign casts to tackle this scorching, relevant play that should leave us all thinking about the costs of war,  terror and the preciousness of human life.