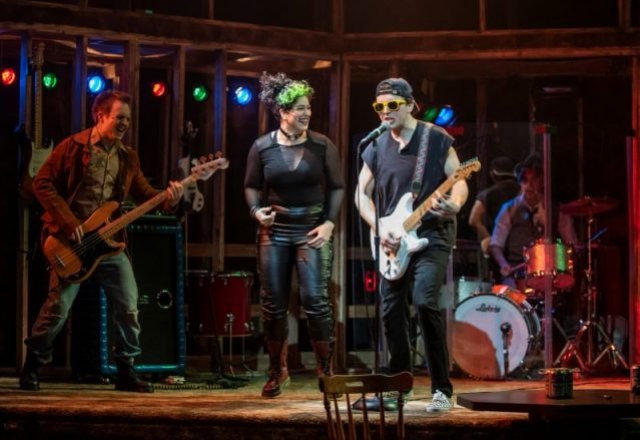 The old rock trope says that punk music is “three chords and the truth.” That holds true for the fact-based story about a kid punk band from Evanston in the 1980s, which just opened in a world premiere by House Theatre. Verböten is the name of the play and the band, fronted by Jason Narducy (12 years old at the time and 16ish in the play). Narducy created music and lyrics for the script written by Brett Neveu. Nathan Allen’s direction gives the play a lot of heart as it tells the story of outsider teens with parents who just don’t understand.

Vocalist Tracey (Krystal Ortiz) seems to have a good teenager relationship with her adoptive parents (Jenni M. Hadley and Paul Brian Fagen). Drummer Zack (Jeff Kurysz) doesn’t get along with his dad (Marc A. Rogers), who tries to be supportive.

The entire cast of 11 actors and musicians join in several full-cast musical numbers throughout the 130-minute production, including the final number, “Goodnight.” Jason, the band’s songwriter, performs the heartbreaking “Broken Home,” “Set Me Free” and “I’m Not Coming Home.” Ortiz as Tracey uses her powerful voice in “Breaking Out,” “You Belong” and “Do I Belong” with her parents, plus her own version of “Broken Home.” If you remember punk songs as those two-minute numbers like “Blitzkrieg Bop” by the Ramones, you’ll find that the Verböten songs use warmer lyrics to tell personal stories. Also, although earplugs are available on request, the music really isn’t especially loud.

At the beginning of the Cubby Bear performance scene, a screen rolls down to show a grainy video of the actual Verböten performance in 1983. The real Tracey and the real Jason sing “He’s a Panther.”

The House Theatre production is performed with a talented and diverse cast; Marika Mashburn is casting director. The four band members are all convincingly teenagers (although hardly tweens) and Ortiz as Tracey is particularly compelling. Her speech on the importance of being alive and angry is a high point of act two.

Lee Keenan designed the multilevel set and the lighting. Matthew Muniz is arranger and music director, supported by Grover Holloway’s sound design. Choreography is by Kasey Foster and costume design by Izumi Inaba.

Verböten by House Theatre continues at Chopin Theatre, 1543 W. Division St., through March 8. Tickets are $30-$50 for performances Thursday-Sunday. Student and industry same-day discounted tickets are $20, for all dates, based on availability.