A Dazzling Exhibit at the Albuquerque Museum 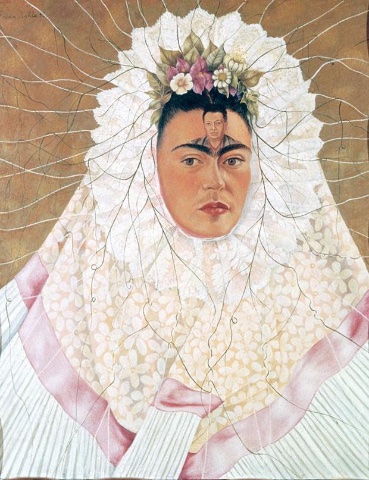 Frida Kahlo: Diego On My Mind, from the Gelman Collection

One of the largest, and most comprehensive, collections of 20th-century Mexican art takes over the Albuquerque Museum beginning February 6th.Consisting of more than 150 works— paintings, drawings, photographs, woodcuts, sculpture and publications — this blockbuster exhibition highlights the identity of Mexico in the aftermath of the Mexican Revolution.

The collection, managed by the Vergel Foundation, under the direction of Robert Littman, was amassed by Jacques and Natasha Gelman. Jacques Gelman was a Russian-born film producer who moved to Mexico just before the outbreak of World War II. He soon became a movie mogul by producing many films with the actor known as Cantinflas, Latin America’s equivalent to Charlie Chaplin.

It was in Mexico City that he met, and married, his Czech-born wife, Natasha. Over the next five decades the two became avid art collectors and patrons of many internationally renowned Mexican artists. They established friendships with, and collected art, by such icons of Mexican modernism as Frida Kahlo (1907–1954), Diego Rivera (1886- 1957), David Alfaro Siqueiros, Rufino Tamayo, and Gunther Gerzso, among others.

Highlights in the show include Kahlo and Rivera, that legendary Mexican couple as famous for their invaluable contribution to modern art as they are for their tumultuous love affair, messy fights, marriage, divorce, and remarriage. More than 50 years after their deaths the duo continues to fascinate.

The exhibition provides a fresh perspective into both Kahlo and Rivera’s intimate view of the world, as well as their contributions to Mexico’s national identity.

While Diego Rivera helped establish the Mexican muralist movement, Kahlo’s fame has far outstripped that of her husband in the years since her death. One reason is because the majority of Rivera’s art was vast and public and cannot easily be shrunk and shipped. His legacy cannot easily be packaged for indoor consumption as can Kahlo’s. Indeed, she has become an icon.

The raw emotion of her paintings still resonates today. Her dozens of self-portraits (it was her favorite subject ) have made her face familiar throughout the globe. Famous not only for her intense self-portraits but also for her iconic sense of style, her pain, passion,  bi-sexuality and pet monkeys, today she is eulogized as a feminist, a selfie queen and a queer icon.

Rivera is known as a socially committed artist whose work revolutionized modern mural painting. His art is political, radical and revolutionary, consisting mostly of monumental frescoes depicting attacks on the ruling class, the church and capitalism. A lifelong Marxist, his vast and public art played a major role in encouraging unity in the aftermath of Mexico’s civil war by speaking directly to the people and encouraging civic pride. His personal life was another matter. He had several wives, lovers and children — before he met married, divorced, and remarried Kahlo.

The works in the Jacques and Natasha Gelman collection epitomize the vitality and expressiveness of modern Mexican art. They were produced in a pivotal period in Mexican history, when the nation sought to redefine itself through political, social, and cultural reforms.

In addition to Kahlo and Rivera, other works in the expansive exhibition include their contemporaries, such as Lola Alvarez Braco, Maria Izquierdo, David Alfaro Siqueiros and Rufino Tamayo.

Owing to the enthusiasm the Gelman’s felt for Mexican art, and their desire that their collection be kept up to date, thanks to the discerning eye of Robert Littman, works by contemporary artists such as Paula Santiago, Betsabeé Romero, Francis Alÿs and Gabriel Orozco have recently been added to the collection.