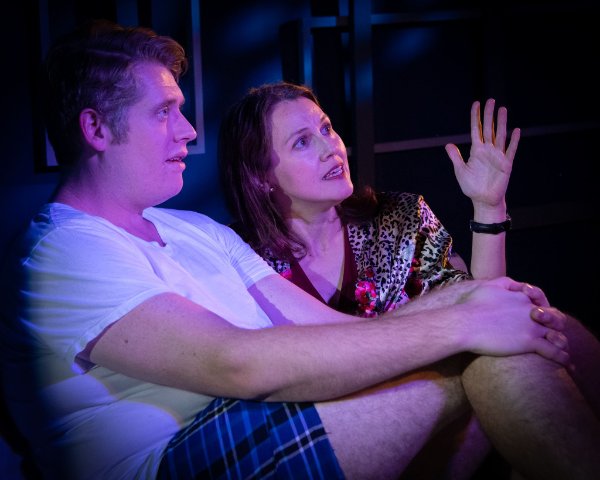 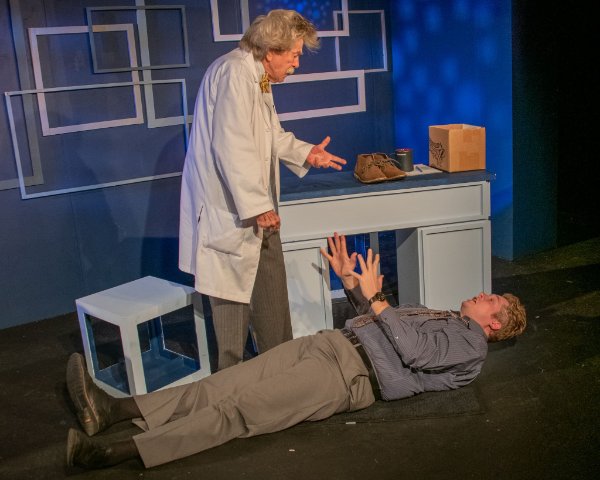 If you think about it, you might conclude that the shapes symbolize connection. At the very least, it would be a good guess. Indeed, as much as the play lightly satirizes “Big Pharma,” Rx is also about people’s need to connect with each other. But our connection to and dependence on prescription drugs is unhealthy, Fodor seems to say in her play.

Rx takes place in a Midwestern city during the present.

Meena Pierotti hates her job as managing editor for the “Piggeries” section in the fictional “American Cattle & Swine Magazine.” In fact, the character, who suffers crying spells, has become desperate.  And so, she has enrolled in a study at the fictional company, Schmidt Pharma. It is testing the effectiveness of a potential drug to treat workplace depression.

As the play progresses, Meena seems to be happier, less anxious and jumpy, and more content about her job. But is the development-stage drug code named “SP-925” the sole reason for her improvement? Or can you attribute the character’s better mood to her relationship with people such as Phil Gray? He is the doctor and Schmidt Pharma researcher tracking Meena’s progress with the experimental medication. Speaking of Phil, being with Meena seems to have had a positive effect on him.

“I don’t think the changes in my heart are necessarily permanent,” the doctor/researcher tells Meena. “I don’t know that I can maintain them without you. I do feel different since I met you.”

Perhaps, Meena has awakened passions in the doctor that he didn’t know he had, or was masking.

Rx features short, pithy scenes that grab and keep our attention. Add likable characters, irresistible one-liners, and physical humor, and you have the formula for a comical, compelling, and entertaining play that does not preach. Rx is sweet without being saccharine and satiric without the sting. If you are looking for a biting satire, look elsewhere.

Still, Rx manages to poke fun at our overprescribed culture and “Big Pharma’s” tendency to put profits over people.

“We’re developing this drug for patients with a household income of at least $65,000,” Phil tells Meena. “I don’t get sent to screen the working poor. They’re not our target patient population.”

To which Meena replies: “I didn’t know it worked like that.”

While Rx is funny and touching, it is not flawless. For instance, during the opening scene, Dr. Gray conducts an initial interview with Meena at her office. It is a stretch to believe that her magazine would allow one of its employees to participate in an outside research study on company time in the company’s building. Also, it is curious as to why Fodor has set the play specifically in the Midwest. The pharmaceutical company in which the action partly takes place is fictional. Its location could be anywhere. And the play’s themes are certainly not specific to any one area of the country.

Under Genie Croft’s polished direction, the production moves at a cinematic-like pace. Also, the actors demonstrate deft comic timing. These vastly talented performers disappear into their characters, whom they portray with impressive spontaneity and versatility.

Elizabeth Price turns Meena into knots of nerves while managing to look and sound natural. Price’s fidgety, restless Meena is like a nervous, cornered cat surrounded by perceived danger. In addition, Price, in a well-rounded performance, deftly captures her character’s sympathetic side. Also, Price makes a seamless transition from a tense, nervous person to a relieved, happy individual.

Speaking of transitions, Timothy Mark Davis, as Dr. Gray, segues seamlessly from an easygoing doctor/researcher to a sensitive, emotional person. Whether Dr. Gray is an emotional wreck, romantic, or patient and laid back, Davis captures the character’s emotions and demeanor with the ease of a seasoned Broadway star.

Frances is a character who is not central to the main action. However, she adds humor to the proceedings. In the role, Laura Turnbull creates a sympathetic, sincere individual.

Dustin Hamilton's set design is effective. Specifically, Hamilton has divided the wide stage in such a way that multiple locales remain on stage. The designer suggests the locations with minimal scenery. This set up allows the action to flow in a fluid, cinematic like manner. Also, it allows transitions between scenes to happen quickly and smoothly.

Alberto Arroyo’s costumes seem appropriate for each character. However, the use of suspenders, which one character wears, seems out of place in modern times.

Add Rx to the company’s many past successes.