A Brief History: A Great Collection of Dance Songs 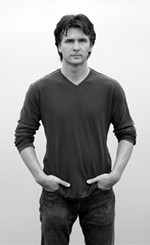 A Brief History: A Collection of Great Dance Songs by Martin Case

Martin Case has been building musical floors under the feet of Boston dancers for a long time – floors supported by an eclecticism that girds the globe, from the cramped North American apartment complex of “Dispute” to “Thailand Outdoors” with its hectic, techno-Thai suspension of disbelief, from the onboard guidance system of a modern Guinean shamanism in “Fractured” to the jungle-born adrenaline of “Hunter”. His disciplined style manages a fundamental profligacy of sourcing, each composition an invitation to worship one tradition after another—or one interlaced with another—through a kind of auditory immersion. We delve in the sacred spaces of the inner ear, where the stresses are laid on reverence, and adherence is achieved through impulse rather than obligation.

In this latest release, "A Brief History: A Collection of Great Dance Songs," Case sketches his ideas like a mathematician chasing the raw data of a mysterious universe across a whiteboard—each new equation laid out smooth and gorgeous as a nude with fruits and wine and patterned pillows—gathering the folds of a unified field that flutters together only barely, and only for a nanosecond, before he wipes everything clean and begins again with something stunningly different that manages, who knows how, to continue a thought uninterrupted in sentences at once more complex and yet more comprehensible than we remember having grappled with before this brief history was written. He grasps confidently after powers we don’t often associate with songs written for dance, and shakes the limbs from which they hang.

His subtitle, an overt riff on Pink Floyd’s 1981 album (the original joke being that, while dancing is permissible, one is more inclined to trance out than to rock out over “One of These Days” or “Another Brick in the Wall”), adds a new layer of irony with the fact that each track in “A Brief History” was, in fact, written for a specific dance routine. (Some of the songs, I suspect, are named after their dancers.) Case has conceived of the album as an auditory journal covering his past five years as a composer working with companies and choreographers as varied as Boston Ballet, Prometheus Dance, the Alvin Ailey American Dance Theatre, Bill T. Jones/Arnie Zane Dance Company, the Mark Morris Dance Group, the Paul Taylor Dance Company Samantha Cameron, Liz Bermann and Min Tzu Li, among many others. Publishing these eighteen pieces as a stand-alone collection puts them within reach of a much wider audience, of course. It also opens a window onto the intensely personal vision-quest behind the collaborative work ethic essential to stage production.

Case has pulled these songs off the stage and into the headset, where they gain no mere afterlife but a reincarnation that invites (and this provides yet another, more delicious layer of irony) the invention of new routines in which the listener collaborates on the unrestricted floor of the imagination. Surely, this is always the situation with music borrowed from the stage, but the sheer saturation of literal imagism found here gives rise to a qualitative difference that brings the listener to task, demanding costumes and choreographies on the spot, with landscapes and lighting effects in the bargain. Local dramas play out in spaces that feel planetary in scale and gravity. The rhythms of "Nina and Veronica" (for one example) require that certain steps be performed in a given sequence, that the heart reach out to a near frantic grandiosity that refuses, in spite of itself, to be rendered comic.

Martin Case employs the rhetoric of shamanism unabashedly. He often plays the role of trickster in his bait-and-switch style of composition, setting up a sense of expectation that he fulfills, time and again, with an apparent non-sequitur—answering a question, as it were, with another question. When he brings us face to face with the rich darkness at the center of this universe, however, in “Lament of the Father” or “The Ancestors Are Moving Through Us” and again in “The Ancestors”, he reminds us that the floor beneath us opens on a world where we take bigger steps than we thought we had legs.

"A Brief History: A Collection of Great Dance Songs" is available at: CDBaby