Based on 1882 Play An Enemy of the People 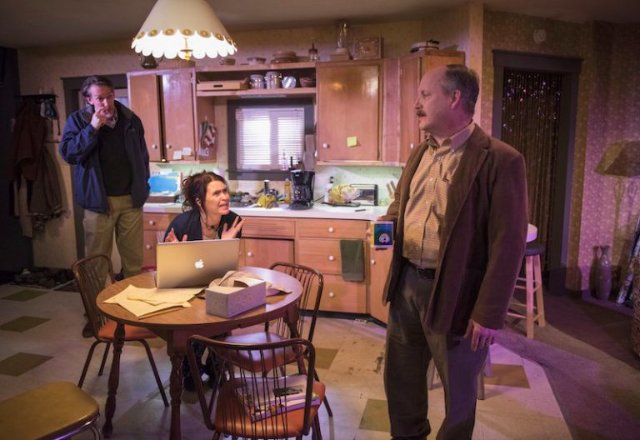 Grimm, Dado and Van Swearingen in the Stock kitchen. Photo by Michael Brosilow.

As if to prove you can out-Ibsen Ibsen, playwright Brett Neveu has taken Henrik Ibsen’s 1882 play, An Enemy of the People, and transmogrified it into a contemporary setting. Neveu transplants a scandal surrounding the water flowing through the Municipal Baths in a Norwegian town to the soil underlying a charter school in an Illinois town. The play is Traitor, now being staged in a slashing world premiere at A Red Orchid Theatre, directed by Red Orchid’s most famous alum, Michael Shannon.

Knowing the Ibsen play is a little bonus, but rest assured, Neveu’s play stands on its own. There’s no need to recognize its dramatic history to be shocked and amused during this Red Orchid production, which includes a break to walk down the street to attend the East Lake Town Council meeting in a nearby empty storefront.

Tom Stock (Guy Van Swearingen) is a science teacher at the new East Lake Charter School, a facility built by local investors that has become a boon to the town’s economic vitality. New residents are drawn to the town by its fine school and local businesses benefit.

Tom’s wife, Karla (Dado) works at home editing textbooks and hosting Taco Tuesdays for friends and family. Their teenage son, Randal (Nation Henrikson) is a student at the charter school.

Tom, always eager to improve the world, suspected that the land on which the school is built had been toxic waste, so he has had the soil tested. The critical envelope arrives in the mail and he learns that the soil is contaminated with lead from the river water poisoned by upstream factories, endangering the health of students and staff. Removing the lead will require a large investment and close the school building for at least two years.

At first, upright citizens like newspaper publisher Walter Hove (Larry Grimm, but played by Steven Winterstein on the day I saw the play) and storeowner Jenn Scheffer (Natalie West) applaud the discovery and the need to clean up the site.

However, Tom’s sister, Patty Stock (Kirsten Fitzgerald), the mayor of East Lake, is horrified at the implications of the finding and tries to shut down Tom’s whistleblowing crusade. (There are hints from Karla that Tom has upset their lives in other towns with similar crusades before.)

Karla’s father, Howard Kihl (Frank Nall), a wealthy conservative and former town council member, cheers Tom on as a poke in the eye for the town’s elite and the town council that booted him.

After a short intermission, act two begins, a few doors north at the East Lake Town Council meeting. We settle ourselves along with other attendees, most of whom are more raucous than the audience members. Council president Fran Wysocki (Mary Jo Bolduc) tries to run a normal meeting, but Robert’s Rules of Order soon break down. Tom Stock commandeers the microphone for an impassioned speech about the lead contamination; family and citizens erupt in rowdy debate. The meeting ends in a brawl and a violation of the Illinois open meetings law, when the council goes into executive session for an illegal reason. (They previously held a budget discussion in a closed session, also illegal.)

The meeting is adjourned, the audience leaves and walks back to the Red Orchid for the final scene.

Shannon engineers this tragicomedy remarkably well. Moving the audience for part of act two works well and it’s fun for the audience to blend into the raucous citizens brigade at the town council meeting. The entire cast is excellent, but Dado is a standout as Karla, calmly trying to corral her rambunctious husband and hold the family together. Van Swearingen is also excellent as Tom as is Fitzgerald as the mayor. Winterstein, filling in as the newspaper publisher, does a fine job but I would have liked to see Grimm play the role.

Henrik Ibsen, considered one of the finest playwrights of the 19th century, had a knack for writing plays with universal themes. Universal, at least, meaning they resonate today. Resonate, or even erupt, shatter, explode.

In Ibsen’s A Doll’s House, for instance, a wife rebels against a suffocating marriage long before it became part of second wave feminism. And in Ibsen’s masterpiece of citizen outrage and public opinion, An Enemy of the People, like Traitor, a whistleblower finds the scandal he proudly reveals is not what his community wanted to hear.

Traitor continues at A Red Orchid Theatre, 1531 N. Wells St., through February 25. The play runs about 2.5 hours, including intermission. Tickets are $30-35 for performances Thursday-Sunday, with two shows on Saturday.