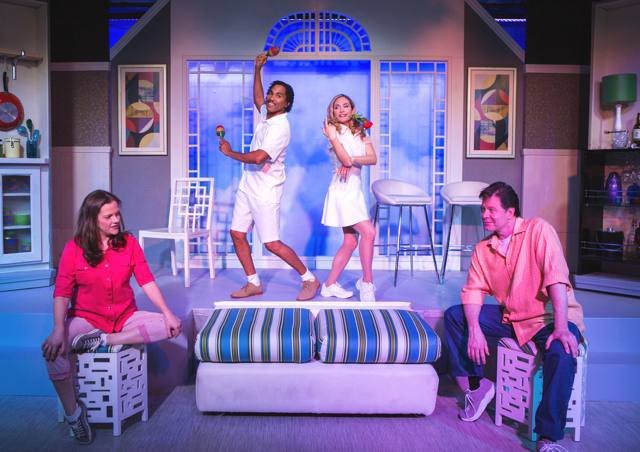 It’s been said that love makes the world go around. So, its love and not climate change that has Mother Nature all upset.  Remember that old TV commercial “it’s not nice to fool Mother Nature” back about ten years or so? Well, we shouldn’t have ignored her admonition. Regardless our actions or hers, the powerful emotion of ’Love’ is here to stay through all kinds weather. (now, that would be the basis for a wonderful song title).

CV REP Theatre, of Rancho Mirage, opened its second production of its 2017/2018 season with a delightful little four-character musical called “Romance/Romance”, that’s in keeping with this year’s theme of “Romance, Real or Imagined.” at the all-Equity valley theatre.

The small, intimate, and charming four-person musical production insightfully written by Barry Harman and Keith Herrmann, and smartly staged by artistic director Ron Celona, is divided into two separate acts.  Act One, is titled ‘The Little Comedy”, based on the Arthur Schnitzler short story set in Vienna at the turn of the 20th century.  The text follows the romantic inclinations of Josefine, (Conchita Belisle Newman) a single, successful, but shy, proprietress of a high fashion women’s wear boutique and Alfred (Christopher Carothers) a wealthy, but bored bachelor, who likes the ladies but is not interested in marriage (he thinks).

Ms, Newman is the possessor of a lovely, classic, clear Soprano voice.  In past musicals, soprano’s I’ve seen and heard, became a challenge to understanding the lyrics.  With Ms. Newman, however, it’s a delight to listen and understand the lyrics when she sings in the upper register and she is also a fine actor.

Her co-star Mr. Carothers, is a handsome Lyric-Baritone, with the voice that perfectly complements his leading lady.  Together, they make a handsome turn-of-the-century couple engaged in the time-honored European tradition of romantic love in Old Vienna. Two musical numbers, for me, stand out: “I’ll Always Remember the Song”, sung as a duet reminiscent of old MGM days of Jeanette Macdonald and Nelson Eddy, and Ms. Newman’s poignant solo number “The Night It Had to End”.

Act One flows seamlessly, thanks to nice directorial touches by Celona, where he punctuates and bridges scene changes by having dancer/actors Robyn Cohen and Eric B. Anthony gracefully waltz across the stage at the end of each scene; sweeping the audience along with them to the next scene.

Romantic love is still in Vogue, but the world has seen some social changes. No longer is divorce a stigma.  We’ve seen the changes that wars bring to society. Old strictures and traditions begin to slip away.   We’re under the spell of the digital age now. We seek instant gratification. Fads come and go, but our romantic urges haven’t diminished, and we still look for those illusive arrows of Eros’ to hit their targets, if only for a short while.

Lenny and Monica and Sam and Barb are trusting, grounded, couples who are happy and content in their marriages.  Monica and Sam have always enjoyed each other’s company in a Platonic way. Both love to flirt and share fantasies, sort of probing each other’s inner fantasies; testing the waters of infidelity with the possibility of a future affair.  But, love affairs between married friends is a recipe for disaster. Two of the non-participants are bound to be hurt, and two families will never be the same, despite the short-term adrenaline rush one may get from the experience.  Guilt, remember, also is a powerful and destructive emotion, and it corrosively remains for years.  Let the buyers beware. But, no spoiler alerts from me here.  One must come and see this splendid production for oneself.

Director Celona has cast his production well.  Ms.Newman and Mr. Carothers have great on stage chemistry which is displayed throughout, but shines in the Act Two musical numbers: “It’s Not Too Late”, and solos by Ms. Newman, “How Did I end Up here?” and Mr. Carothers with “Moonlight Passing Through a Window”, are all rendered with tenderness and aching poignancy.

Ms, Cohen and Mr. Anthony’s rendition of “Small Craft Warning” and “Think of The Odds”, hits its mark informing the audience there’s dangerous waters ahead.   And the numbers “So Glad I Married Her”, and “Romantic Notions”, sung by the entire company are all winning musical numbers, thanks to the four-person band of accompanying musicians: Jaci Davis on piano, Daniel Gutierrez on Keyboards, Dave Hitchings on percussion, and Bill Saitta on string base.

“Romance/Romance” is another stellar production that performs at CV REP Theatre in Rancho Mirage, through February 11, 2018.