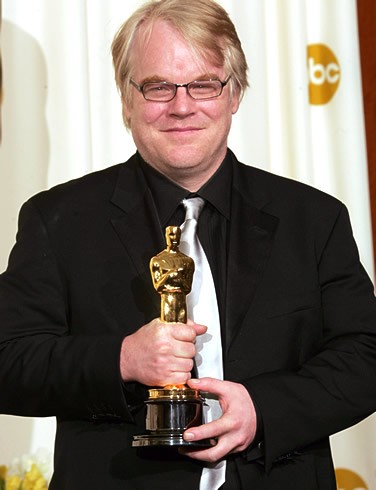 Phillip Seymour Hoffman won an Oscar for his leading role in Capote.

On Super Sunday, February 2, Americans are gathered around flat screens to partake in a sports ritual.

Here in New England most of us lost our enthusiasm for today’s Super Bowl when the incredible Payton Manning bumped off equally legendary Tom Brady and the Patriots.

Speculation is that Manning, recovering from neck surgery that all but knocked him out of the game a couple of years ago, has a final shot at another ring. His Broncos with the best offense in the NFL are facing the Seattle Seahawks and its top ranked defense.

Today vast fortunes will be made and lost.

In New York, however, the Oscar winning actor, Phillip Seymour Hoffman (born July 23, 1967), ran out of luck. This morning he was found dead from an apparent heroin overdose.

He earned a BFA in drama in 1989 from New York University's Tisch School of the Arts. Soon after graduating, he was in rehab for drug and alcohol addiction. He remained sober until May 2013, when he entered a detox facility after relapsing.

A scruffy, off beat, eccentric persona was evident in his uniquely individualistic approach to roles. Hoffman's characters conveying darkness of every shade were known for galvanic flashes of lightness and humor.

Often in supporting roles as a character actor his presence provided spice and energy to even the most mundane projects.

Hoffman tilted toward portly and out of shape. He lacked the looks, charm and charisma of a leading man. Typically, as the villain Owen Davian in Mission Impossible III, however, he stole every scene from pretty boy star Tom Cruise in an otherwise forgettable action/ adventure film.

In 2005, in Capote, he was more than up to the task of portraying all the twists and turns of the most complex and convoluted writer of his generation, Truman Capote. The author had too many demons and agendas to leave a significant oeuvre but he defined a genre, faction, with the masterpiece In Cold Blood. Hoffman was truly riveting as the dogged author/ researcher of a brutal and senseless murder in rural America. He had superb support from Catherine Keener as Capote’s great friend, Nelle Harper Lee, the author of the equally paradigmatic To Kill a Mockingbird.

Who will soon forget his portrayal of a priest who may or perhaps not have been a pedophile, Father Brendan Flynn, in Doubt (2008). The film was an adaptation of John Patrick Shanley's Pulitzer Prize winning play. As the title suggests it leaves the audience guessing through his brilliantly ambivalent performance.

The wonder of Hoffman’s work as an actor was that it never conveyed the obvious. There was always an unanticipated evolution to his characters.

No, The Master (2012) was not a great film. But his character Lancaster Dodd got us perhaps as close as we will ever come to invading the heart and mind of Science Fiction writer and cult leader, L. Ron Hubbard. He founded the ensnaring maze of ersatz religion known as Scientology. I emerged from the theatre fascinated by Hoffman’s performance but not having any better understanding of Hubbard.

We often have to remind ourselves that actors are providing glimpses of reality through their art. In the best works and finest performances that line is often blurred.

This is most true in works that convey biographies of famous people particularly from our own time. There is an inevitable comparison between the performance and what we know of the historical individual.

Perhaps our deepest involvement with a great actor comes when the character is invented and based on literature.

The 2005 PBS mini series Empire Falls, based on a novel by Richard Russo, was an enervating portrait of small town rural America with real and local problems. The series had its charms particularly in the late work of Paul Newman. Hoffman competed with but lost to Newman for an Emmy.

His role as the melancholy Charlie Mayne continues to haunt and captivate me. It came as a complete shock and surprise when he wandered out to the gazebo in the garden and shot himself.

Just as today we are dismayed by the news of his self inflicted death. Arguably, an accident and not a suicide.

A teddy bear of a man we would have given him a hug. You sensed that he was warm, humane, amusing and compassionate if given the chance to know him.

We regret not getting to see his definitive Willie Loman in the 2012 Broadway production of Death of a Salesman. Our last glimpse of Hoffman was the curious and amusing Plutarch Heavensbee in The Hunger Games: Catching Fire.

Whenever there is a tragic loss of this magnitude we look back for clues. Surely the tabloids will be all over the lurid aspects of this story. Perhaps a thread is there in all those rich and quirky roles. I always wonder and ask actors where they go to find facets of their characters. Particularly the dark and evil ones.

Some give the deadpan response that it’s just acting. An actor who plays numerous cunning villains told me they wash off at the end of a production like taking a shower.

It’s a tough and inevitable question to which there is never an adequate answer. Some actors are resentful of the invasion of their craft. They say it’s like asking the magician to reveal his tricks. Some say never hip a square. If you have to ask you don’t have the right to know.

How many time does the hack journalist ask “What’s it like to?”

For actors like Hoffman, going so deeply into self creating odd and nuanced characters, arguably, some aspect of them never resurfaces. There is the gnawing agony of the tears of the clown.

After some 23 years of sobriety the demons that haunted Hoffman’s youth returned and overwhelmed him.

Don’t envy a great artist his or her fame and fortune. In the end we all pay the piper. The trick is to stay a few steps ahead and don’t look back.