We're All Brothers And We're Only Passing Through 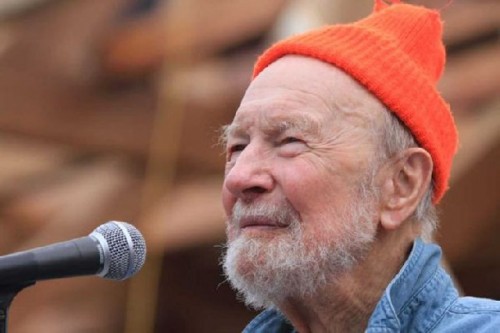 With the passing of Pete Seeger this past week, the outpouring of recognition, regret and remembrance has reached a crescendo. While my primary focus on the social media I frequent has a predominate orientation around roots music, its performers and its fans, most likely my experience may not be that of most of you, but that focus has remained steady and at full torrent for several days.

I have few if any idols in my pantheon, but if there is anyone that I admired enough to put there, Pete Seeger might well be the one. Primarily my admiration for him stems from his willingness to stand up in confrontation of the morally corrupt yet immensely powerful House Un-American Activities Committee who threatened him and many others with economic and political ruination for being a proclaimed communist. Cited for contempt and sentenced to prison, he survived to see the ruling overturned and in triumph he continued to be the musical evangelist for brotherhood, sisterhood and solidarity in the face of oppression. I have serious doubts that my own courage is sufficient to have done likewise.

Odd that at this time when the instances of oppression are clearly mounting, that our president labels him with being the conscience of our nation.

The morning after Pete’s death I got an email from Pete Frame, founder and guiding light of the UK’s now defunct, but once internationally recognized music publication, Zigzag. It began very simply, “Where would I have been without Pete…?”

In a following note, Frame goes on to write:

“I was 21 years old when I saw Pete Seeger at the Royal Festival Hall on the South Bank of the Thames in London. Saturday 29 February 1964. It was the most inspirational concert I had ever attended…”

“Although I had no experience whatsoever, I was going to be a writer, I had decided. The magazines that Seeger and his friends had created – Sing Out! and Broadside – and the underground press which followed in their footsteps, had much to do with my decision. I wanted to be part of their world, the world that Pete Seeger inhabited.”

Pete Frame’s sentiments are being echoed in the media by those from the day-to-day folk fan to folk performer royalty.

“When I was 15 years old, my aunt took me to a Pete Seeger concert. If her intention was to expose me to a more illuminating environment than that of a high school campus in a small town in Southern California, she succeeded. The concert took, like a good vaccine. From that moment forward, Pete helped shape my life both musically and politically. I believe that courage is the most vital of human qualities, and that taking risks is essential to making serious social change. Pete courageously took the risks and paid the price. He remained a moral compass for this society through fiercely challenging times, with his music, his songs, and with enthusiastic perseverance. He transformed his sword and shield into a banjo, and with it and his music, brought us as close to freedom as we may ever come. “We’ll walk hand in hand, Black and white together, We shall live in peace, We are not afraid, We shall overcome, someday, We shall overcome, someday.” Now Pete can do what he never did much of in his lifetime. Put aside the banjo and rest with Toshi, down by the riverside.”

These are just two of the hundreds of testaments that have streamed across my computer screen in the last few days. While I have my own memories of occasional conversations with Pete, some about the music, some about evolving technology, some about the news of the day, there is little I can say that has not been said many times by many others.

I think the best I have seen and the one I would most like to share with you came from Arlo Guthrie:

“Pete Seeger: I usually do a little meditation and prayer every night before I go to sleep - Just part of the routine. Last night, I decided to go visit Pete Seeger for a while, just to spend a little time together, it was around 9 PM. So I was sitting in my home in Florida, having a lovely chat with Pete, who was in a hospital in New York City. That's the great thing about thoughts and prayers- You can go or be anywhere. I simply wanted him to know that I loved him dearly, like a father in some ways, a mentor in others and just as a dear friend a lot of the time. I'd grown up that way - loving the Seegers - Pete & Toshi and all their family. I let him know I was having trouble writing his obituary (as I'd been asked) but it seemed just so silly and I couldn't think of anything that didn't sound trite or plain stupid. "They'll say something appropriate in the news," we agreed. We laughed, we talked, and I took my leave about 9:30 last night. "Arlo" he said, sounding just like the man I've known all of my life, "I guess I'll see ya later." I've always loved the rising and falling inflections in his voice. "Pete," I said. "I guess we will." I turned off the light and closed my eyes and fell asleep until very early this morning, about 3 AM when the texts and phone calls started coming in from friends telling me Pete had passed away. "Well, of course he passed away!" I'm telling everyone this morning. "But that doesn't mean he's gone."

"He has been and will continue to be a part of the lives of many of us as long as we stick around.”

That works for me too.