Super Bowl Was Just That 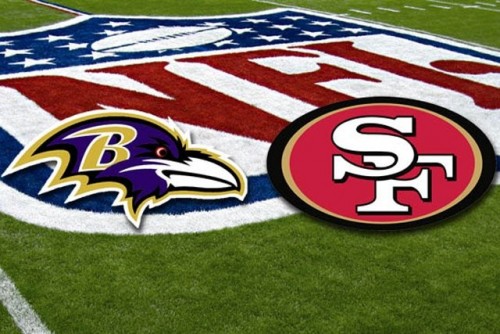 San Francisco and Baltimore met in the Super Bowl. 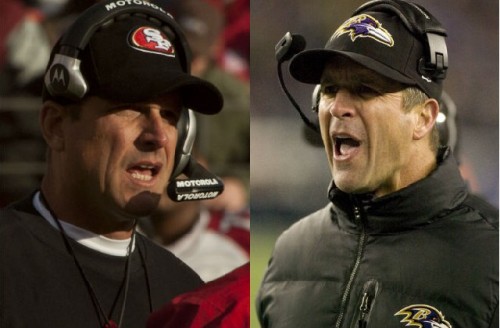 Sibling rivalry in a squeaker of a game. 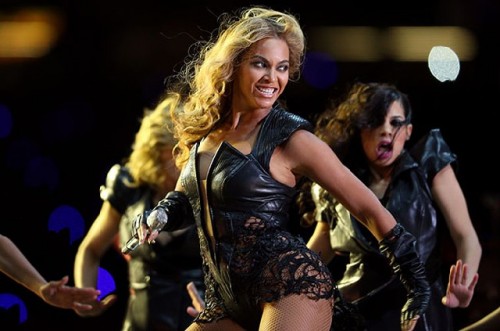 Beyonce and the girls got a groove on during half time. 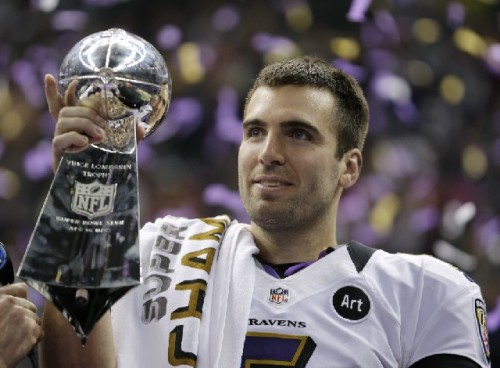 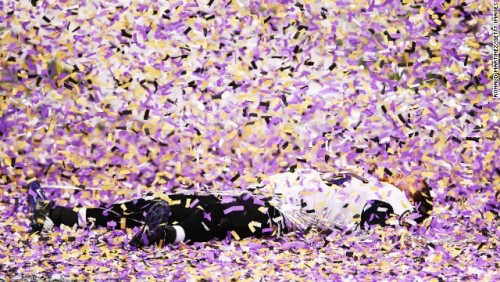 A victorious player making snow angels in a storm of post game confetti.

Both teams, The Baltimore Ravens and the San Francisco 49ers demolished Tom Brady “The Greatest Quarterback Ever” and our beloved New England Patriots on their way to New Orleans and a matchup in Super Bowl XLVII.

So this is the 47th time that teams have met to determine the championship of the National Football League.

When the Patsies tanked to the Ravens, one of the all time stinkers, my heart croaked for the game.

But a neighbor, Opie, invited us- Rick, Michael, Roman- for a Boy’s Night to hunker down before a 48” High-Def TV and celebrate the ritual guy thing. Irving was invited but saw the game in Vegas. Wow imagine that.

They bet on everything including the coin toss which has fifty/ fifty odds.

Put me down for ten grand on heads.

Phil also declined as he and Gail were on a plane to Phoenix. His son was pissed to have to pick up the folks during the game. Bummer. How could they be so inconsiderate? Phil was anticipating updates from the pilot.

Linda made wonderful chili with “Texas cut beef” then departed with a gluten free pasta and broccoli to join the girls, Astrid, and Michael’s wife, Sarah.

I made Buffalo wings with Frank’s Hot Sauce. Astrid asked for a few without the sauce to bring to the girls.

In the middle of the night I took a pill for acid reflux and heart burn.

But had an absorbing dream about making art with Andy Warhol.

Which was better than the one a few nights ago about being a made man in the Mafia.

That was a killer.

The resolution of the flat screen was amazing. Like being there in sharp detail with saturated color. Opie says that it’s a Smart TV whatever that means. Mine is pretty dumb. I have to tell it what to do. Imagine a TV with a mind of its own.

I offered to help Opie bring it back to Walmart today like so many folks do.

You know the line. “It wasn’t as smart as I had hoped for so give me back my cash.”

But Opie said that it’s a keeper.

“Nice TV” I said. “But do we have to watch the Super Bowl? How about golf?”

Rick chimed in “Yeah, how about synchronized swimming?”

Chowing down we got into the game.

There was the endless pregame chatter with a panel of former coaches and players.

Those ads sell for $3.8 million each. Good grief.

Then the lights went out.

Most Super Bowls, except those with the Pats, are pretty dull.

Often the ads are more interesting than the game itself.

Truly one of the great all time games.

By half time it looked like yet another boring blowout.

Going into the locker room the Ravens led 21 to 6.

Time for another chicken wing.

Was she lip synching?

The high energy routine was about an all chicks band and an attractive, skimpily attired entertainer with a gaggle of ladies performing calisthenics. As spectacle it was just fine but I have like zero interest in her music. Was this singing or aerobics?

What’s always most impressive is mounting such a complex show and then tearing it down. The logistics are just phenomenal. So yes, I do appreciate all the time and effort that Beyonce and the ladies put into the show.

The ads, for the most part this time, kindah sucked. Like why would the Stones sell out letting Mercedes use the classic “Sympathy for the Devil” to hype a car? It’s hardly that Mick and Keith need the money. Roman had no objections to an ad that used a riff by Meatloaf. No problem.

For once the game itself was more interesting than the ads or half time show.

Considering that it was a gathering of artists we had insightful comments about the teams, players, coaches, stats, and play by play.

During half time Rick predicted that San Francisco would come back, make scores, perhaps tie, but ultimately loose to the Ravens.

When the second half kickoff was run back from the end zone for a score Rick the prognosticator wasn’t looking that good. With the score now 28 to 6 I gave him the business.

The talking heads discussed whether All-Pro Jacoby Jones’s 108 yard run back was a Super Bowl record. It seemed to suck the wind out of the 49ers.

Good grief what a setback to mounting a comeback.

The talking heads sliced and diced the wisdom of safely taking a knee in the end zone or risking running out a line drive kick. Compared to a high floater it means that the kickoff team hasn’t had time to get down the field and set up its defense. Jones cut through them like a hot knife and soft butter.

Then the lights went out. Seemingly forever. Actually 34 minutes.

I called Astrid and the girls to give them an update.

When play resumed the Ravens  lost their mojo.

Bam, Bam, Bam, San Francisco and their rookie quarterback, Colin Kaepernick, found his touch. When he failed to find an open receiver he just took off and scrambled for first downs. Opposing quarterback, Joe Flacco, the eventual Most Valuable Player of a barn burning squeaker, seemed stalled in a funk.

Opposing coaches, the Brothers Harbaugh, were going nuts over calls. Losing coach, Jim, later stated that the officiating cost him the game. Perhaps.

He seems like a hot head. During the partial black out you could lip read him F’ing an official.

You wonder what their parents thought. When it came down to that nail biting ending who were they rooting for?

Imagine the conflict of interest for folks that had it both ways? Congratulating their winning son John and consoling the looser Jim.

In this Super Bowl everyone was a winner.

Except “The Greatest Pass Receiver Ever” Randy Moss who mostly phoned in his game and caught like one pass for a decent gainer.

Wow. What a great game.

Coming home to our loft Astrid was in bed watching TV.

We watched another installment of Downton Abbey.

Those Brits can be such a pain in the butt.

They play football without helmets and pads.