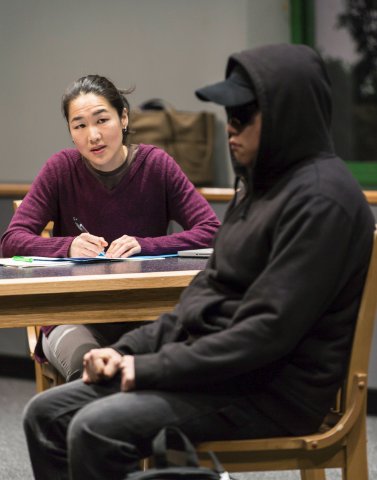 How do our perceptions shape reality? How do we connect with people who seemingly avoid human interaction?

Julia Cho is attempting to explore these ideas in Office Hour at Long Wharf Theater through Feb. 11. This co-production will head to the Berkley Repertory Theatre after its run here.

The opening is somewhat clunky – it is obviously trying to set up the plot. We see three people standing around a bar top drinking coffee. They are, we learn, all English professors who teach writing courses. Two of them are discussing a male student that each has had and who is in the third teacher’s class this semester. They and the other students find him disturbing; they are both warning his instructor this semester and asking her to do something about him.

What is so disturbing? First of all his writing; it is always about violence, torture, rape, sexual assault and more. Second his actions. He always wears a jacket with the collar turned up, a cap, and sunglasses so that his face is barely visible.  Plus, he almost never speaks.

In the next scene we see the instructor, Gina, hastily moving a table in a quite empty space. She sets up her laptop, sits down and wait, facing a glass door. The clock moves and at 4:45, she gets up to prepare to leave. At that moment, the student enters, looking just as described by the other teachers and carrying a large back pack.

It seems that she has told him that all of her students must meet with her for twenty minutes. Is this just ruse? We’re not sure and Gina gives conflicting information during the course of the meeting.

Cho intertwines the mundane meeting between instructor and student, with outbursts that at first horrify us until we realize they are fantasies. These are projections of what the instructors fear the student is will do. Let’s just say that many of them involve guns and shooting, like so many episodes we’ve seen in high schools and on college campuses.

With this play that seems to switch between the mundane and the horrific, some of Cho’s points are clear: the perception of the student (Dennis) as dangerous and a potential shooter, not only distances others from him, but leads directly to their “worst case scenario” fantasies.

But Cho is also trying to explore ethnicity and the feelings of being “the other.” Not only Dennis but Gina are Asian-Americans, who do not necessarily feel comfortable in our society. And Gina, like the other two instructors are all viewed as “temporary employees” or adjuncts; their contracts could be ended any semester for almost any reason.

Cho’s play is often successful, yet the fantasies become less effective as the play goes on even though they are ratcheted up. One can question if Gina would really share that much personal information with a student, even in an attempt to make a connection with him. It is also questionable that the male instructor, David, would display such outright hostility bordering on both racism and aggression, to this student.

Yet despite reservations about the play, the production is excellent. Director Lisa Peterson has kept the play moving, and stages the fantasy scenes for maximum impact. In that she is aided by the excellent lighting by Scott Zielinksi and the sound design by Robert Kaplowitz.

Daniel Chung has the difficult task of being mysterious – barely seen nor heard for much of the play. When he does speak it is softly and in monotone. He depends on body language to convey Dennis’ alienation. But he does manage to create some spark of sympathy for him.

Gina, played very well by Jackie Chung, imbues this teacher with the desperate need to “reach” a student. She captures the sincerity of Gina which perhaps borders on naiveté as well as her own issues.

Jeremy Kahn has a one dimensional role as David and Kerry Warren has only the one scene as the third teacher.

Office Hour may terrify you, upset you or you may view it as a only partially successful attempt to explore this issue.