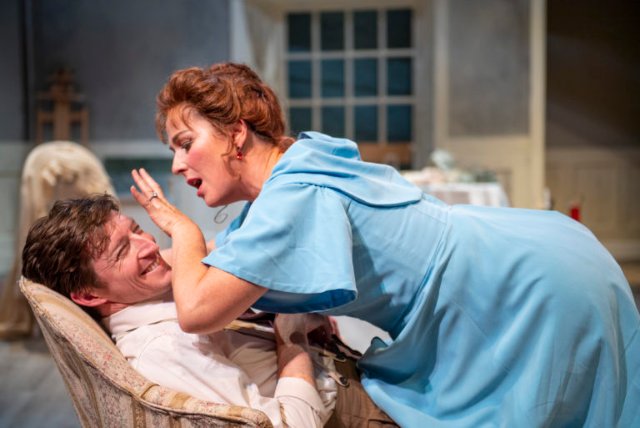 For those who fear that August Strindberg’s Creditors concerns debt collectors knocking at the door, you are mostly wrong. In this tightly wound three-hander, the playwright deftly exposes the raw underflesh of relationships, especially marital. He is not the only author to explore the battlefield between the sexes, but here he dwells on what each partner owes to the other and the asymmetry that may result in love and respect for one another.

The context is that youngish artist, Adolph, and his previously married wife, Tekla, have returned to a resort where they had honeymooned, as had she with her first husband. Dialogue in a sequence of three long dyads drives the narrative. Adolph and his new friend Gustav inhabit the first scene; the couple, Adolph and Tekla, the second; and Tekla and Gustav the third.

The action consists largely of each character’s purging bitterness toward one another. As a newly burgeoning author, Tekla has produced a roman a clef in which she malevolently characterizes her first husband as an idiot. The theme of mentoring followed by resentment toward the mentor runs strong, and in many respects, Creditors exhibits the characteristics of a psychological combat for dominance, and possibly revenge.

Gustav, who has befriended the impressionable Adolph recently, exercises strong sway over the latter, inducing him to abandon painting for sculpture (which Gustav later denigrates) and encouraging behavior toward Tekla that is not likely to be well received by her. In another instance of passive-aggressive animosity, Adolph notes how Tekla blossomed under his encouragement, but now, she fails to acknowledge the debt and will accept advice from anyone but him.

Threads of Creditors are woven into later hostile relationship dramas from Ibsen’s Hedda Gabler to Albee’s Who’s Afraid of Virginia Woolf. Indeed, Strindberg publicly accused Ibsen of basing Hedda on Tekla. But one difference in the heroines (?) reflects a fundamental difference in the two Scandinavian playwrights. Ibsen’s characters act very much in accordance with their social class and position, while Strindberg’s reflect internal motivations and turmoil. In fact, one can easily conceive of Creditors not as a palpable reality but wholly as Adolph’s internal reflection. After all, the script is comprised of three sets of arguments which may be interpreted as running through Adolph’s mind – his lengthy exchange with his friend, then with his wife, and finally between his friend and his wife, but surreptitiously observed by Adolph.

The question remains why it is that these stiff, formalistic, turn-of-the-century, European talkathons are revived. Apart from penetrating drama, literate scripts, and uncommon human insights, a couple of specific attributes of this play appeal to the theater goer. As superficially different as the ways of these characters may seem from our contemporary practices, they deal with many of the same relationship issues from accountability to infidelity that we face in modern times. And more specifically, Tekla is a liberated woman, who, among other beliefs, does not accept that a woman is capable of loving only one man at a time. A central issue of the play that still resonates today is both male characters’ inability to accept and to deal with an independent woman on her terms.

It should be noted that one weakness of the play is flawed plot logic. Without wanting to give anything away, suffice it to say, that the characters would have to be completely oblivious at times to not understand circumstances staring them in the face.  However, this would not be the only story around requiring a little suspension of disbelief.

One aspect of this production that should prompt little criticism is the quality of the performances. Joseph Patrick O’Malley is totally commanding as Adolph – a tour de force. At the outset, he conveys a smiling visage of confidence, but Gustav’s line of attack undermines Adolph’s self-belief, and he becomes whinier and more disabled by his infirmities. Jonathan Rhys Williams embodies the self-serving dominance that the manipulative Gustav lords over the other two characters. And Rebecca Dines excels as the aging coquette who charms in response to confrontation. Director Barbara Damashek resists the drag that can result in drawing room drama by keeping up the pace and extracting well-inflected portrayals from the actors.

Creditors by August Strindberg is produced by Aurora Theatre and plays at their stage at 2081 Addison Street, Berkeley, CA through February 24, 2019.