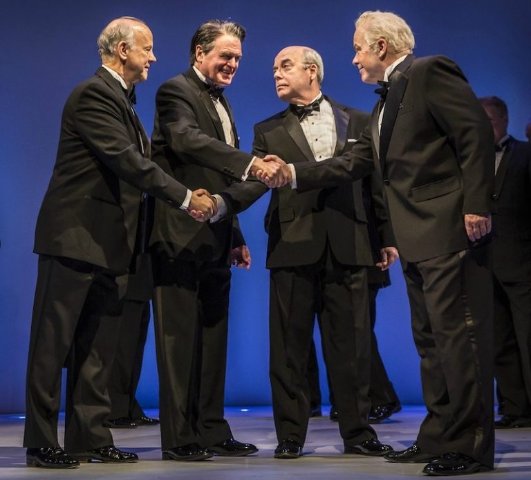 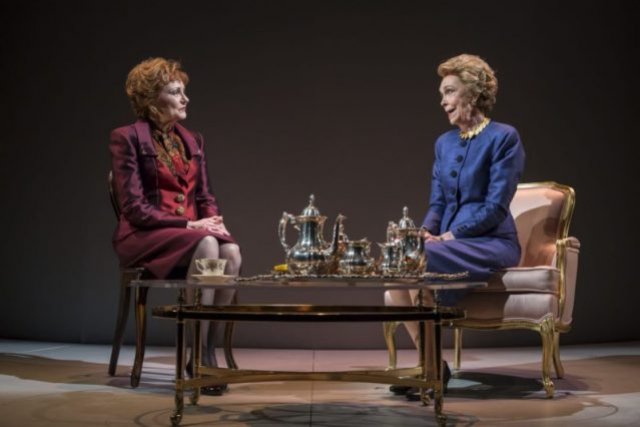 The blind date actually took place on November 19, 1985, in Geneva. Nothing much happened diplomatically; the world order wasn’t changed. But the two leaders of the U.S. and the then-USSR had a couple of long, personal talks and the summit was considered a good sign for the future. Just a few years later, the Berlin Wall fell and the geopolitical world began an explosive period of change.

Goodman Theatre’s world premiere of Blind Date by Rogelio Martinez, directed by Robert Falls, takes us through the tense period and the negotiations leading up to that summit—and finally, briefly, the summit itself. While the two leaders—Ronald Reagan (Rob Riley) and Mikhail Gorbachev (William Dick)—are key to the story, the real work of negotiating and preparing for the summit is led by the two diplomatic chiefs: Secretary of State George Shultz (Jim Ortlieb) and Soviet Foreign Affairs Minister Eduard Shevardnadze (Steve Pickering). They both do excellent work—both smart and manipulative—as they work with their own leaders and their counterparts.

Blind Date is a clever, well-written play, blending both the news we know from the day’s headlines—and records, both fiction and nonfiction, with cunning, behind-the-scenes dialogue.

The story line of the play starts in the early days of the Reagan administration (we see the President learn the nuclear codes on his third day in office) and follows the negotiations to determine if and when the two leaders will meet, the actual agreement to meet, and finally the meeting itself where the two leaders find a certain amount of camaraderie. The scenes flow from the Oval Office to Gorbachev’s office to a White House press conference, and a certain D.C. restaurant.

Two scenes featuring the two First Ladies provide a break in both the hue and drama of the play, which is almost entirely performed by serious, dark-suited males. Nancy Reagan (Deanna Dunagan) and Raisa Gorbachev (Mary Beth Fisher) meet for tea and cleverly barbed conversation. Dunagan’s performance is outstanding because we know she perfectly mimics the look and style of Mrs. Reagan. Fisher’s performance is also excellent although her persona isn’t as familiar to us.

Falls’ production is impressive mainly because of two factors. The large mostly male cast is composed of seven main actors plus three more playing multiple smaller roles, and an additional ensemble of 11 playing staff members, diplomatic corps, press and others. Their performances are embellished by the Goodman’s gorgeous and inventive staging mechanics. The design by Riccardo Hernandez appears to be a large gray circular container center-stage. The walls slide open and spin closed, while the floor tracks move as needed for entrances and exits. The President’s Resolute Desk is lowered from the Oval Office scene to below the stage. Within the container, the interior room sets are furnished simply but elegantly.

Blind Date is the final play in playwright Martinez’ Cold War trilogy. The other two are Ping Pong, about U.S.-China relations, and Born in East Berlin, about the impact of a Bruce Springsteen 1988 concert in East Berlin just before the fall of the Berlin Wall. (It was “a nail in the coffin for East Germany,” said one observer.)

The play suggests a warming in relations between the two countries, but just four years later, the Berlin Wall fell and two years after that, the Soviet Union collapsed.