Authority and Freedom by Jed Perl 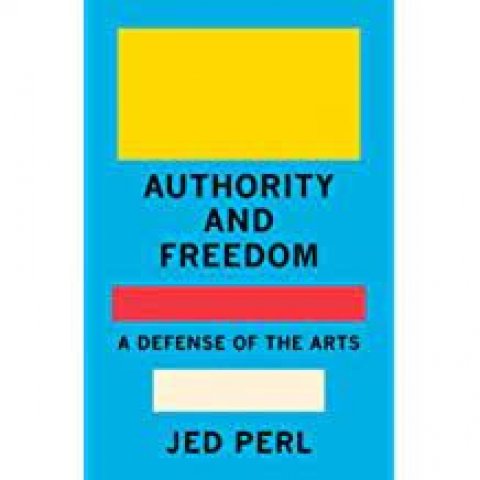 In his latest book “Authority and Freedom” Jed Perl establishes a paradigm that spells out a healthy antidote to the purpose for which art is currently practiced in our culture. He sees it as a paradigm that has always existed even as far back as the work of Egyptian artisans millennia ago where the hand of the craftsman can set itself off from the strict story telling of the hieroglyphs. In the Middle Ages artisans told stories in paint, glass and sculpture from the Bible but let come into play their own fantasies of what took place in the biblical story book. Hence: Authority and Freedom.

The church embodies on the one hand the notion of authority, the traditionalist base that dictates how one should proceed as artists according to the parabolic story line of the Bible. On the other hand fears of sacrilege did not hinder the freedom to play of the artisan who pushes against the limits of the authorization. According to Perl priests would take notice of these deviations from the tradition but I suppose once something is written in stone as it were it is hard to excise. They live on untouched to this day.

The choice of the word authority seemed awkward to me at first glance as cognates such as authoritarian come to mind and must be explained away as not being what Perl intends. The meaning of authority Perl wishes to work for him is borrowed from his readings of the writings of the philosopher Hanna Arendt in particular ”What is Authority” for whom the word has more in common with the Latin word augere meaning augment. Authenticity is another cognate that unlike authoritarian is closer to Perl’s intent.

The book is built out of many examples from the history of art, music and poetry among other artistic domains to elucidate the dynamic between authority and freedom. If you look up the usage of authority in the dictionary it tends toward imposition of dogma to be accepted due to its, legal validity, gravity and authenticity. In a religious realm it is a passage of scripture that settles argument. In the hands of an individual, it represents the power to reinforce or convince people through a command. In fact, many of the examples of authority that Perl provides for the most part seem to grow out of the spiritual realm. His description of a memorable rendition of Amazing Grace by Aretha Franklin points to the roots of her popular music in the heart of the black Southern Baptist Church. Gospel becomes the authority for the breakaway of her career into the realm of pop. But this breakout can at times be a breakdown as in the poetry of T.S. Eliot’s the “Waste Land” where the spirituality of the past is seen to dissolve and fragment no longer providing the pillars of wisdom that so forcefully shaped Western Culture.

The dichotomy of Authority and Freedom can take place historically from one cultural artifact to the next but can take place within the work of the individual artist’s career. Perl points out that the classicism of Michelangelo’s early work becomes blatantly Baroque later in life as it breaks down the classical canons that other Renaissance artists followed. It can be seen as well as a harbinger of the Baroque that followed the Renaissance.

Authority has a numinous almost prophetic aspect to it in the hands of Perl. It is a source of clarity and insight that tries to organize the world harmoniously. It devolves into the secular but out of that movement art happens. The individual is the agent of this evolution. The aforementioned Medieval craftsmen sneak their opinions and play it into their sculpture and painting but in the case of Mozart and Beethoven there is a battle between them and the aristocracy that in the day owned their musicians. Both wanted to be respected as creative forces in their own right. I recall an anecdote of Beethoven and Goethe taking a walk in the countryside around Vienna when they encounter an important Hapsburg to whom out of deference Goethe instinctively bowed. Beethoven according to the story trudged right past him and said: “He should be bowing to me.” Mozart also tried to establish himself as a commercial success beyond the patronage of the aristocracy. He wanted to be his own authority in breaking away from societal authority where they were in many ways no more important than valets. The notion of genius cannot be ignored as the center of gravity that establishes these shifts in authority from the aristocratic overlords to the creative individual. The world would then submit to an authority built out of force of genius. What an exciting dynamically charged interaction! It is the birth of modernity.

These transfers of power,not to diminish the validity of the event in the work itself where this battle takes place are societal events. The most recent societal shift is the ongoing dissolution of the Beethovian individual that thrusted itself into richer and deeper and more powerful notions of self-hood, by the Marxist-Leninist belief that the individual only has an identity by being part of the societal whole. The battle of Beethoven to assert his individuality in the context of aristocratic sponsors participates in the larger societal struggle against the kings and queens that had shaped the world through the 19thc with one violent revolution after another culminating in the Russian Revolution at the beginning of the 20thc. Power was handed down from one generation of royalty to the next and over time the European aristocracy intermarried to create a superstructure that exists in part to this day. Beethoven was a radical, who looked to Napoleon to break down the established order, freeing the individual to create their own story. This is an incredibly dynamic storybook. But what happens when you are told that the state, which represents the newly liberated masses, cannot be criticized or that the individual’s life has no private meaning only a political one.

Any attempt to see the individual as separate from the state and other than as a manifestation of liberation of the masses is suspect and treasonous. To ignore this is referred to as “false consciousness”. That is: your very being is suspect if you don’t see how oppression is built into the capitalist system of which you are a part. In the Soviet Union gulags were set up to cure individuals of this false consciousness and a paltry yet courageous few such as Sakharov and Solzhenitsyn were able to reach out to the West with stories of the how horrible the oppression was in the USSR. Shostakovich’s music embodies the anxiety of existing in this authoritarian world where one’s loyalty to the cause of the worker is always under scrutiny.

Perl ends his book with a a story about W.H. Auden’s famous eulogy to W.B. Yeats. It embodies the essence of the Authority/ Freedom interplay. There appeared around the same time several essays by Auden about Yeats who in the 30’s showed sympathy for the European fascists. In the eulogy Auden charitably saw this as a sort of silliness and a sentimentality for the old aristocracy that Yeats admired and from whom he received patronage. In the end Yeats’s poems are well wrought and to this day resonate with the general public and therefore can be seen as democratic. He excercised his freedom to be a maker of poems even if when it came to his “doing” in the world of politics he failed miserably with his allegiances. (Perl distinguishes the making of the poem over which the poet has absolute control with the doing of politics where mistakes can be made in a world that is often beyond our control.) What seems to be missing in this description of Yeats is his theosophical interests. They seem to be the authority by which he gives gravity to his language. He will apply it, so it seems, through magical incantations. Although I can find no proof the lines “The silver apples of the moon, The golden apples of the sun” taken from the “The Song of Wandering Aengus” seems to have some source in a magical symbolic incantation .They to this day have a feel of the mysterious in them. Ray Bradbury named a collection of his short stories “Golden Apples of the Sun” and said his wife had introduced him to Yeats and these words had the same effect on him as they do on me. Could this be the authority hidden in Yeats’s work? The spiritual authority he attributes to Aretha Franklin from her Southern Baptist gospel roots. In lesser hands of not a great maker of poems, the influence of theosophy could be stultifying as Flannery O’Connor commented about a very catholic novel she was told to read and admire by a catholic priest, whose dogma was correct but whose story was badly told.

I had a strangely pertinent face to face interaction with Auden in 1970. He came to dinner with the Scholars of the House at Yale, a group I was part of whose members were allowed to work on independent projects during their senior year. I was an admirer of Yeats and must have known at the time about the Eulogy he wrote for him. I asked him after dinner what he thought of Yeats. He responded very adamantly that he was a fascist. And left it at that. How did Ed Mendelson his biographer who accompanied him to the dinner react? Auden passed away the following year. Did he no longer have the same tolerance for Yeats’s politics? Did it finally seem to matter that he supported fascists? A classmate Joe Knight who studied English Literature at Yale and Harvard said there is evidence that Auden was extremely jealous of Yeats’s talents. At the end of his life did the wrong politics give Auden the possibility of cancelling Yeats’s greatness as a poet. It suggests that behind the concern for art being politically correct is the illness that Nietzsche said awaited our culture as a whole: the waste land grows: Resentment or “Ressentiment” as he used it is the deeply sour well out from which we channel art into predetermined realms of activity. Perl's new book is its diagnosis.