Parsifal Returns to the Metropolitan Opera 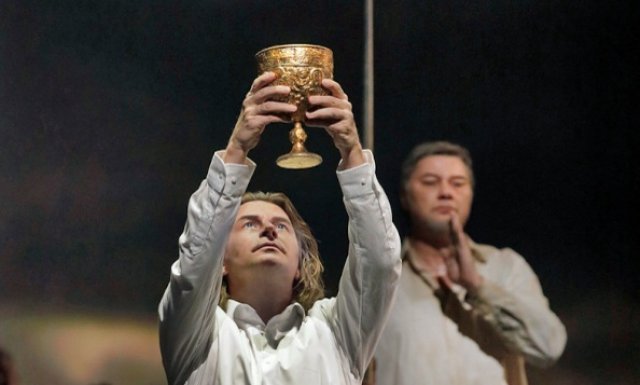 Parsifal holds a special place at America's largest opera house: the company was the the second theater ever to produce the work after Wagner's own Bayreuth Festival. (That production, in 1903, flouted an edict from the composer himself that the work must only be performed at Bayreuth.) The work demands the utmost commitment from its singers, players and audience.  It is also a long and treacherous evening, with slow passages that push an orchestra's abilities (and an audience's patience) to the very limit. Its four and a half hour length is further stretched by long intermissions to an evening that lasts nearly six hours. (Nézet-Séguin set down his baton at 11:55 pm.)

Nézet-Séguin, who will become music director at the Met in 2020, chose to emphasize measured, moderate tempos and the transparency of the score. He opted for the "applause" entrance, but the opera still started in hushed silence, the sound of the first wind notes climbing upward on a delicate lattice of strings. Certain key moments were played so softly as to be almost inaudible, while the big orchestral and choral swelled and ebbed from the pit, lapping at the ears much like Girard's 1,250-gallon lake. (According to the Times, it's made from "tap water, glycerin, and red and blue dye." Back to the review.)

The other major new arrival was Klaus Florian Vogt, singing his first Wagner opening night at the Met.  (Vogt appeared in two performances of Lohengrin in 2006.) He took a very different approach to singing Parsifal, one that sounded foreign to the ears at first. He favored a high, sweet and ultimately musical approach that is miles away from the often-heard "Bayreuth bark." It was disconcerting at first to hear lines that are usually shouted in exhaustion at the end of an act sung--and sung with great beauty and purity of tone. "Du weisst, wo du mich wiederfinden kannst!" (the last line of the second act) simply floated in the air over the sparse orchestration, much as the Spear hovered over the hero's head at the opera's climax.

Also new to this Parsifal was soprano Evelyn Herzelitus. She proved to be a powerful, dramatic Kundry, plunging the vocal depths of the first act and evolving from harridan to seductress in the second. In the long dialogue with Vogt, she morphed again, increasing the tension in her voice as her attempts to seduce the would-be knight were met with increasing resistance. As she forced her voice into the tormented intervals that Wagner calls for here some unlovely sounds came out, but these sounds, those of a soul shrieking in torment, are not supposed to be pretty. Her acting in all three acts, especially the third which calls for her character to be mostly silent was deep, involving and thrilling to watch.

While Parsifal and his quest to reunite the lost Spear with the Grail form the plot of this opera, it could be argued that the anguish of the wounded king Amfortas forms the dramatic crux of the work. Wagner stripped away any sense of time from his libretto, which makes the king's suffering an event of infinite and dreadful length. Peter Mattei was up to the task in the outer acts, moving like a crippled figure with some terrible, terminal illness and bringing the tremors and sighs to his voice when appropriate. It was particularly shattering to watch this tall, strapping baritone laid low, crawling into his own freshly dug grave on the stage in the last act and begging for death to take him.

René Pape reprises the elderly knight Gurnemanz, who has three long paragraphs of exposition to sing in the first act. This is a virtuoso performance, infusing the long descriptions of castles, spears and the Holy Grail with the accent and subtlety of a lieder singer. He rarely turns on the full power of his voice, preferring understatement that makes the audience lean forward to listen when they're usually falling asleep. The blood-drenched Evgeny Nikitin is suitably demonic as Klingsor, one of the rare singers that makes one wish the role of the evil wizard was longer. Offstage,  bass-baritone Alfred Walker sang an imposing Titurel, though it seemed that at the applause, the audience did not know who he was. Then again, they had been at the opera for six hours. (Reprinted from Superconductor with permission).