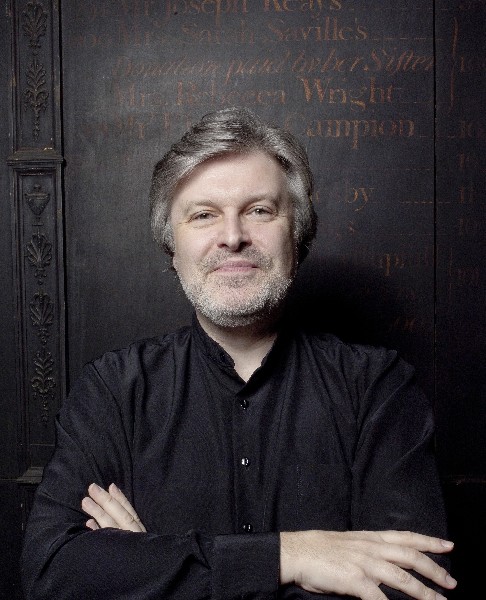 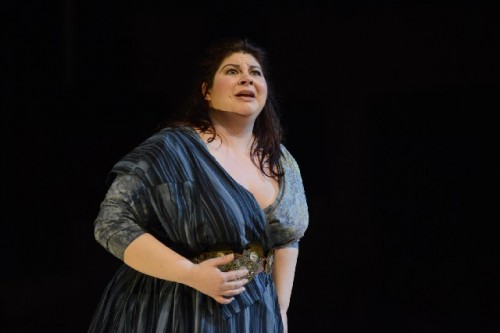 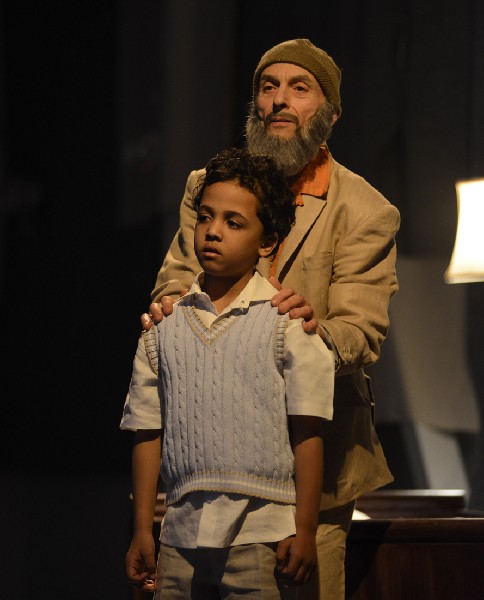 Darrell Long as Ishmael and David Kravitz as Abraham 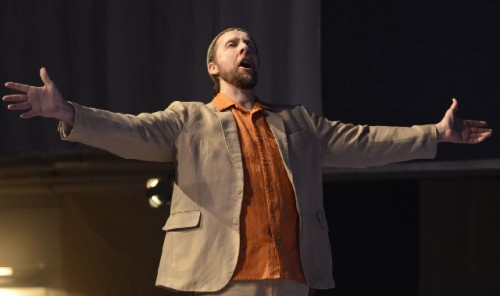 David Kravitz in an expansive moment as Abraham 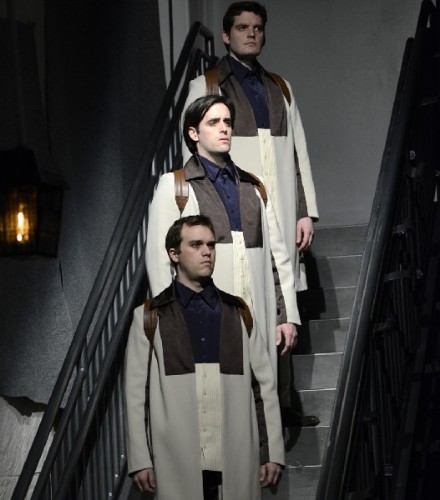 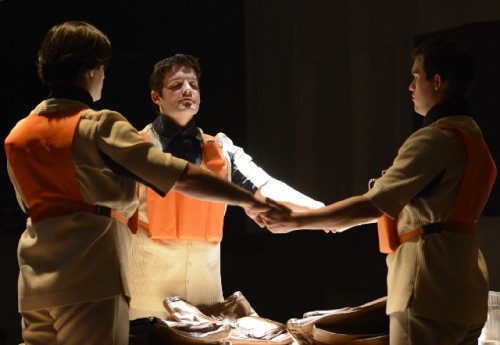 The three Travelers pray after having put on their suicide vests 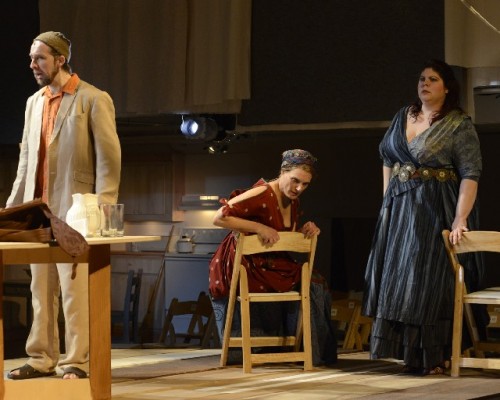 David Kravitz as Abraham, Christine Abraham as Sarah and Michelle Trainor as Hagar 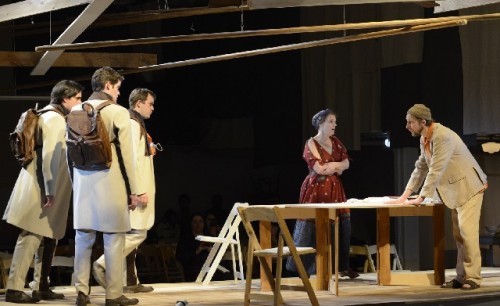 The three Travelers with Abraham and Sarah 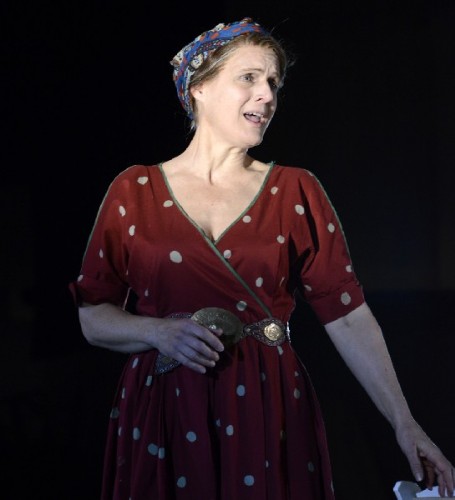 At the heart of “Clemency,” James MacMillan’s 50 minute-long opera is a troubling premise: the three avenging angels sent by the Old-Testament God to annihilate Sodom and Gomorrah, the sinful cities of the plain, find their equivalents in today’s suicide bombers. I don’t agree with that premise; in fact, I reject it emphatically, and I suspect that most people would as well. The 3,000 victims in the Twin Towers on September 11, 2001, and the countless victims of random suicide actions in the name of God across the globe, are not sinners deserving of fiery death, even if they might not all be faithful to the terms of absolutist religion. Some of them might be homosexual and some of them might be women who believe that they have the right to make decisions about their own body, but surely that does not condemn the others, does it? (A little irony there.)

The fundamentalist preacher Pat Robertson believed that any catastrophe, natural or manmade, was the result of God punishing sinners, specifically homosexuals and women advocating their rights. His belief was rejected even by most fundamentalists and led to the discrediting of the entire fundamentalist tyranny that confronted the United States not so long ago. Although recent theological thought – if that is not an oxymoron – argues that the sin of the cities of the plain was inhospitality, in the popular mind and in linguistic usage, the sin of the Sodomites was tolerance for homosexual behavior.

James MacMillan is a fervent Roman Catholic who has written music specifically for Church rituals and events. He has the right to his opinions. If a work based on such a distasteful (to me) set of ideas as “Clemency” were co-produced by the Roman Catholic Archdiocese of Boston and Westminster Cathedral one would have no objections: that’s their prerogative. But it was co-commissioned by the Boston Lyric Opera; the Royal Opera House, Covent Garden; Scottish Opera and the Britten Sinfonia, all ostensibly secular organization. One has to wonder what led them to sponsor a work that would be so offensive to so many in their audience? Were they hoodwinked by MacMillan to his purpose? (Or is the problem with the Boston staging? – Andrew Eggert was responsible for the angels strapping on the suicide vests. But surely MacMillan would have objected if it contradicted his intentions.)

I suggest that Esther Nelson, Boston Lyric Opera’s general and artistic director, seriously think about the implications of co-commissioning such a work. What kind of message does she want to send to the gay and feminist members of the opera-loving community – it’s all right to kill you because you’re sinners? I suspect that is not the way to build audiences in an ostensibly liberal town like Boston. There are hundreds of composers who would love to get an opportunity to present an opera in the BLO’s annual Opera Annex showcase. So far, there have been four white males chosen, three British. To expiate the bad vibes produced by this year’s commission, maybe the next one should be by a woman or a queer. Or – hey! - maybe even an American.

Okay, even a distasteful work of art needs to be appraised. (Caveat emptor.) MacMillan has based his short work on the three 1960s parables by Benjamin Britten intended for church performance. Like them, they are short and require only a small orchestra. (As I suggested, “Clemency” should be presented in a church.) It retells the story of Abraham and Sarah, two of the most unlikable of the many unlikable characters in the Old Testament. Let me remind you: barren, Sarah urges Abraham to bear a son with their Egyptian slave Hagar to fulfill God’s command that he breed the future race of Israel, so he rapes her and she conceives a son, Ishmael. Later, when Sarah miraculously bears a son, Isaac, they banish Hagar and Ishmael to the desert to almost certain death. Nice people. (Still later, Abraham obeys Yahweh’s command that he kill his son as a sacrifice to the Lord. As Bob Dylan put it, “God said to Abraham, ‘kill me your son.’ Abe said, ‘god, you got to be puttin’ me on’.” He wasn’t – he was testing Abraham’s faith. At the last minute, an angel of the Lord intervenes, saving monotheism from an early death.) This guy, a rapist and a willing child-killer, is considered the ultimate patriarch of Jews, Christians and Muslims. No wonder we’re fucked! Oh, yeah, in the opera, Abraham and Sarah are presented as the paradigm of kindliness and hospitality. Tell that to Hagar!

MacMillan is a skillful composer, adept at adapting Christian Church music – anthems, hymns and chant - Britten-derived modernism and, in the case of “Clemency,” Middle-easter modalities and Jewish cantorial song into a seamless whole. He writes attractive melodies, and there are a few real moments of musical inspiration in the work: As Abraham bargains with the angels to spare the inhabitants of Sodom and Gororrah, he sings a plaintive aria, with the small string orchestra swelling in support, reducing his number from 50 step by step, “Suppose you find just five?” (just and kind people). And closing the work, Sarah, pregnant with Isaacwaxes lyrical beneath an ancient tree, on green grass, wondering whether her son will be born seeing smoke rising from the cities of the plain, the string orchestra effectively evoking the British pastoral tradition of Vaughn-Williams and Delius.

The BLO had the good idea of prefacing the short work with Schubert’s early song “Hagar’s Lament.” But then they sabotaged the idea by casting a totally inadequate singer to sing it. A certain violence to the original was committed by music director David Angus – where did they get this guy? – that was only abetted by soprano Michelle Trainor, who shrieked throughout the overwrought song. Poor gentle Schubert, a likely homosexual, would have died a second time.

The evening was made tolerable by the male singers, first among them baritone David Kravitz, one of the finest singers in Boston, who deserves better material than this. He made Abraham an almost sympathetic figure. And his cantorial duties suggest that he might be moonlighting in one of the Brookline temples – to the delight and benefit of the congregation. As Sarah, Christine Abraham was also effective, sensitively communicating with the audience, although her high notes were a little forced. As the three travelers – the angels who eagerly accept Abraham’s hospitality – David McFerrin, Neal Ferreira and Samuel Levine were all fine, singing in high male voices, mostly in churchly unison, their directives from God.

Opera, like all art, means something or it is worthless. In the men’s room on the way out, I encountered an old man – okay, he was a couple of years older than me – who was raving about how wonderful the evening was. I demurred, saying that I didn’t think that the victims of 9/11 were sinners who deserved their fate. He objected, “I just listen to the music, to the singing.” If that’s typical of the opera audience response, it’s all hopeless. Sorry.