Will Eno's The Flu Season at A.R.T. 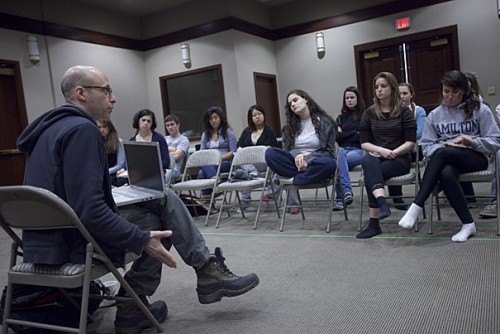 The Flu Season is a delicately crafted story about lost souls who try to find their way through love and loss, hope and disappointment, sickness and health; a touching tale told with humor and humanity. New York Times drama critic Charles Isherwood described Will Eno as "a Samuel Beckett for the Jon Stewart generation."

MARCUS STERN is an Associate Director of the American Repertory Theatre and the A.R.T./MXAT Institute for Advanced Training at Harvard.  His directorial work at A.R.T. and the Institute includes Endgame, Donnie Darko, The Onion Cellar (with The Dresden Dolls), Beckett Shorts, Neighborhood 3, Stone Cold Dead Serious, and Nocturne (which was subsequently moved to New York Theater Workshop in NYC), The Ohio State Murders, Marriage of Bette and Boo, Woyzeck, Buried Child, and The America Play. He has directed productions nationwide and in Europe, and has taught at various schools and universities including the Yale Drama School, New York University, and Columbia University.  He currently teaches at Harvard University where he is also a faculty advisor for undergraduate theater at Harvard.

Admission is free. Tickets should be reserved by calling the A.R.T. Box Office at (617) 547-8300; or online at http://www.americanrepertorytheater.org

The Institute for Advanced Theater Training at Harvard was established in 1987 by the American Repertory Theater (A.R.T.) as a training ground for the professional American theater. Its programs are fully integrated with the activities of the A.R.T. In the summer of 1998, the Institute commenced a historic joint program with the Moscow Art Theater (MXAT) School. Students engage with two invaluable resources: the work of the A.R.T. and that of the MXAT, as well as their affiliated schools. Together, this exclusive partnership offers students opportunities for training and growth unmatched by any program in the country. The core program features a rigorous two-year, five-semester period of training in acting, dramaturgy, or voice pedagogy, during which students work closely with the professionals at the A.R.T. and the MXAT as well as with the best master teachers from the United States and Russia. At the end of the program, students receive a Certificate of Achievement from the faculty of the American Repertory Theater and an M.F.A. Degree from the faculty of the Moscow Art Theater School. Further information about this program can be obtained by calling the Institute at (617) 495-2668 or online at http://www.harvardtheatertraining.org.