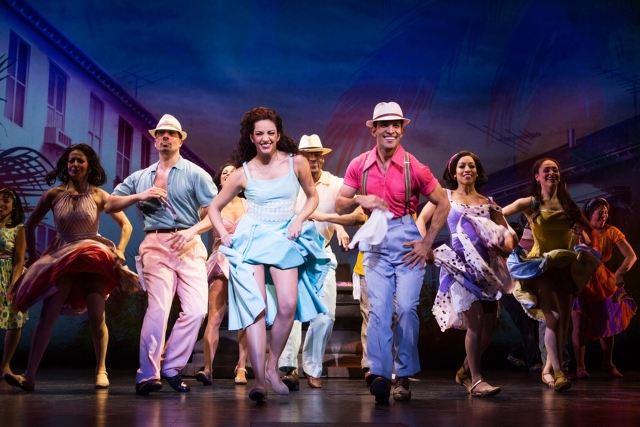 Miami theater lovers, prepare to get on your feet.

The 2017-18 Broadway in Miami season at the Adrienne Arsht Center for the Performing Arts will kick off with "On Your Feet!," featuring the true story of Miami legends Gloria and Emilio Estefan.

The multiple Grammy-Award-winning husband-and-wife artists, who hail from Cuba but have lived most of their lives in   Miami, were present as a large crowd became the first to learn on Monday about the Arsht's next season.

The reveal event announced next season's five shows (six, including a season option for subscribers).

During a rousing evening at the Knight Concert Hall in downtown Miami -- across the street from the Arsht Center -- performers danced and sang samples from each show.

In addition to "On Your Feet!" which will play the Arsht from Oct. 5-15, the season includes the musical "Finding Neverland," which tells how J.M. Barrie, the author of "Peter Pan," became inspired to write the much-loved story.

The show, the winner of Broadway.com's Audience Choice Award for Best Musical, will land on the Arsht stage Dec. 26 and play through Dec. 31. While the Broadway production has closed, the musical is touring the U.S.

"It's wowing audiences and critics across the country" said the event's host, Bob Bucci, president of the marketing division of  Broadway Across America. He added the musical "helps you find the kid in yourself."

After "Finding Neverland" flies away, Miami audiences will see "The Color Purple," a musical based on Alice Walker's Pulitzer Prize-winning and National Book Award-winning novel. "The Color Purple" will run from Feb. 27-March 4, 2018.

This Broadway season's revival of the show won the 2016 Tony Award for Best Revival of a Musical. Bucci said he doesn't view the re-mounting as a revival; it's a "re-imagined, brand-new production. It's also "stripped down," allowing audiences to concentrate on the characters, the music and the story, Bucci said.

The story is about two sisters. One is a missionary in Africa while the other lives in the South. Throughout the course of the tale, they maintain their loyalty and trust in each other, despite their distance and hardships.

"This classic novel of American literature is rich with passion, pain, inspiration and an indomitable love of life," according to a synopsis on the novel's back cover.

"The Bodyguard: The Musical" follows from April 3-8, 2018. The musical is based on the hit 1992 film of the same title. It will star Grammy Award-nominee and R&B superstar Deborah Cox in the tale of a former secret service agent hired to protect superstar Rachel Marron from an unknown stalker. The agent and Marron's relationship develops into something unexpected for both of them.

Bucci said Cox is going to "blow the roof off the Arsht Center" and the audience will be "bowled over by" the show. It features
songs from the 1980's and 1990's.

"The Book of Morman" will be back by popular demand. While the mega- popular, nine-time Tony Award-winning Best Musical isn't part of the Broadway Subscription package, subscribers will have priority access to buy tickets before the general public.

"The Book of Morman" will play the Arsht from Nov. 28-Dec. 3 of this year. The hilarious musical, which the New York Times praised as "The Best Musical of This Century!," follows oddly-paired missionaries sent halfway across the world to spread the Good Word. Bucci said the last time the musical played in Miami it was "virtually sold out."

"The Book of Morman" was the only show on Monday night that didn't include a performance sample. Much of the evening centered on the season opener, "On Your Feet!" in a fitting tribute to the Estefans -- a couple whose name has practically become synonymous with Miami's Latin music scene.

Several cast members from the Broadway production performed an upbeat dance to the "Conga" song, the first hit single released by Miami Sound Machine, led by Gloria Estefan. The audience responded with a standing ovation and cast members performed the dance while exiting the auditorium as a kind of postlude to end the evening.

"Your mind is going to be blown away by this (musical)," Bucci said.

Miami will mark the first stop on the musical's first national tour. It will remain on Broadway even as the touring production makes its way across the country.

"We're so honored to have this musical open this season," Gloria Estefan said.

She said people have seen the show "over 50 times" on Broadway. She praised those who created the musical, including book writer Alexander Dinelaris. "The team was amazing and we all worked together every step of the way," Estefan said. She said the musical is completely faithful to her and her husband's story.

"Everything actually happened," she said, adding people probably expected the show to be rousing and fun, but not contain as much pathos as it does. The music star said she's seen tears streaming down people's faces as they watched the show and has heard sobbing.

Bucci said about 85 percent of new musicals "don't make it."

Bucci also praised the Estefans. "You have been such pioneers in breaking down barriers," he said.

To subscribe to the season, visit arshtcenter.org/broadway, which is available 24 hours a day; call (305) 949-6722 from 10 a.m. to 6 p.m. Monday through Friday as well as noon to 5 p.m. Saturday and Sunday. You can also visit the Adrienne Arsht Center box office at 1300 Biscayne Blvd.