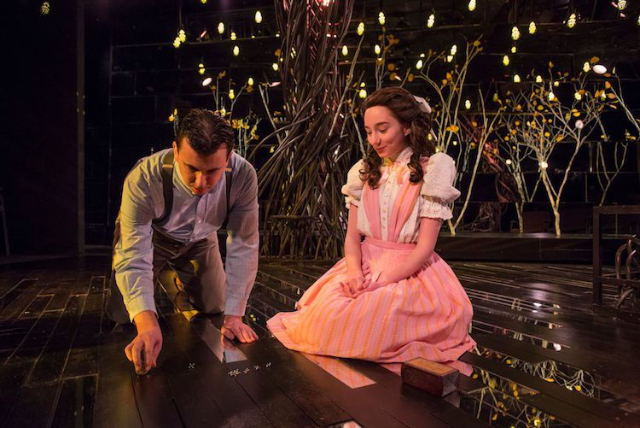 Schine as Woodnut and Hlava as Iris. Photos by Michael Brosilow. 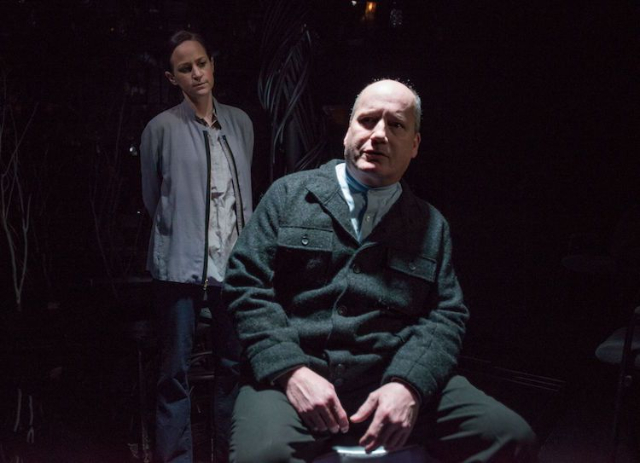 Neal as Morris and Van Swearingen as Sims.

Jennifer Haley’s very contemporary play, The Nether, is set in a world we may find all too familiar. Neither real nor unreal. Mostly virtual, in fact, rather like our social media existences.

The new production at A Red Orchid Theatre plays with our feelings about love and relationships and our innermost, hidden thoughts and perversions. Karen Kessler’s direction takes the story from the real—a police-type interrogation room—to the virtual—a “realm” called the Hideaway where visitors pay high prices for service packages as well as the “children” that accompany them.

Sims (Guy Van Swearingen), a wealthy man, is being grilled by cyberdetective Morris (Ashley Neal) about his life in the Nether as well as offline. She’s investigating the Hideaway, which is “a perfectly rendered Victorian house, populated by four children.… We even peeked under the hood, if you will. The Hideaway is written in beautiful code.” “It’s code that I have patented,” Sims replies.

He insists he is operating legally but Morris demands the location of the server where the Hideaway code is stored. Once the code is deleted, she says, Sims will be free to go, without his login being terminated. Because that is the gravest threat the detective can use to make people talk. “We’ll rescind your login. You will never have access to a terminal again.”

At the Hideaway, Sims visits with Iris (Mary Lou Hlava), who is 9 years old. When a visitor arrives, Sims greets him and they discuss service packages. Woodnut (Steve Schine) chooses a deluxe package and asks for Iris. The Hideaway scenes take place in a grove of trees created from tangled cables, twinkling lights and a garden background.

Another visitor to the Hideaway and one of Morris’ suspects is Doyle (Doug Vickers), a science teacher nearing retirement. By the end of the play, we learn that he leads a double life at the Hideaway. The clues suggested in Morris’ interrogation finally become clear.

The Nether is smartly written and plotted, although it fails to persuade us to feel any real human connection to any of its characters. I was impressed by the production that I saw last year at the InterAct Theatre in Philadelphia. The realm of the Nether is an ominous and chilling version of Second Life, which probably has the potential to be equally ominous and chilling if we let our virtual selves take over our so-far-real lives.

The performances by Kessler’s cast are fine, especially Van Swearingen as Sims and Hlava as Iris, who is believable as an exuberant and mostly cheerful child/avatar.

John Musial’s set design places the interrogation room at one side of the small Red Orchid performance space. The forest of trees created from tangles of cables, while successfully creating a sci-fi/techy environment, also created a visual barrier. From where I was sitting, I couldn’t see the performers in interrogation scenes. From talking to others who attended, it seems the seats nearer the door or facing front would be preferable to those situated to the left of the stage.

The word “nether” traditionally meant simply lower in position, or a region below the earth’s surface. The Urban Dictionary defines it as a Nether realm—a world for myth creatures, a demon world or a dimension of evil or imagination.

Playwright Haley is the author of plays including Froggy, Neighborhood 3 and Breadcrumbs. Her subject matter focuses on ethics in virtual reality and the impact of technology on human relationships. The Nether was developed at the Eugene O’Neill Theater Center’s National Playwrights Conference in 2011.

The Nether runs 85 minutes with no intermission. It continues at A Red Orchid Theatre, 1531 N. Wells St., through March 12. Performances are Thursday-Sunday with tickets priced at $30-35. Or buy tickets by phone at 312-943-8722 where you may or may not talk to the virtual box office. A Red Orchid is a very small venue, so do buy tickets in advance.