But I Didn't Shoot the Deputy 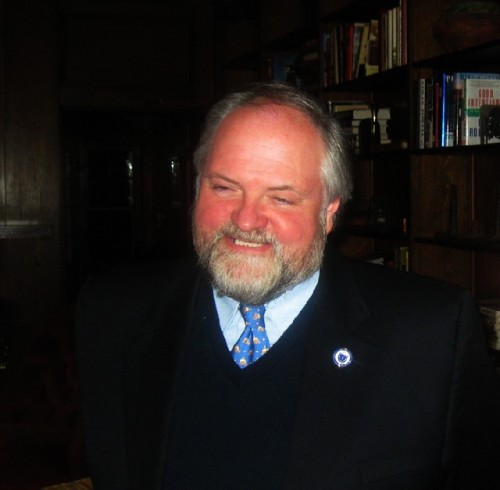 Bosley has been on Beacon Hill since 1987 but now he wants to sleep in his own bed as Berkshire Sheriff. Giuliano photos. 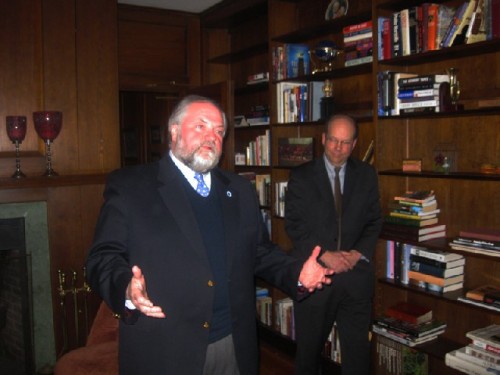 On the stump at the Cozy Inn at Richmond. 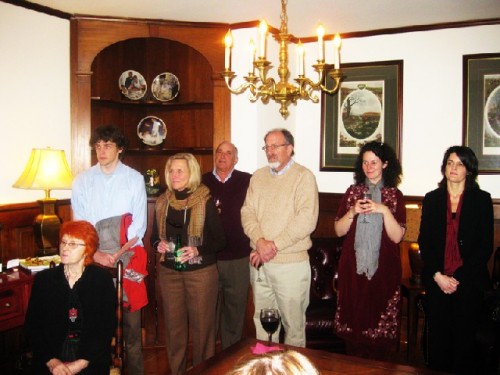 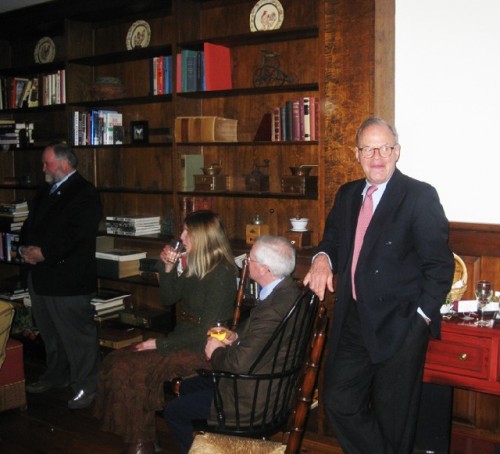 Another view of the room. 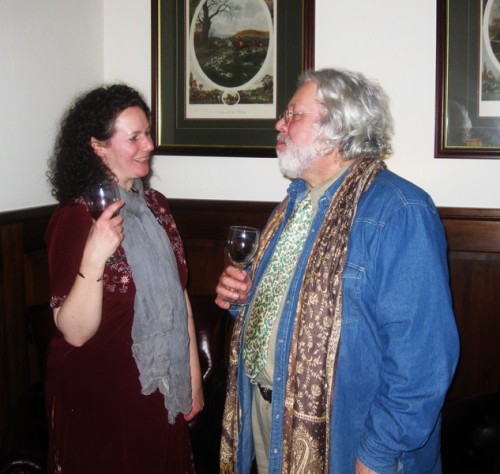 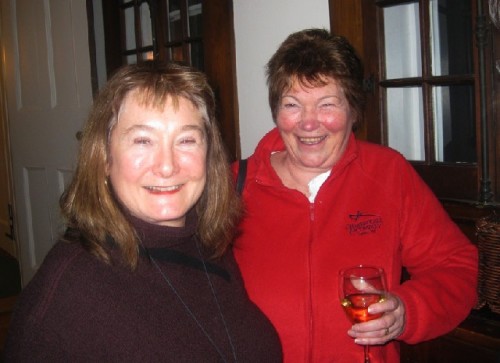 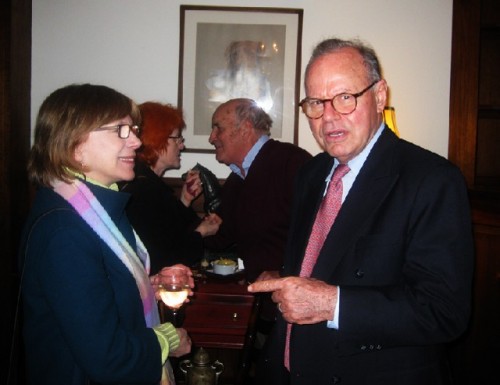 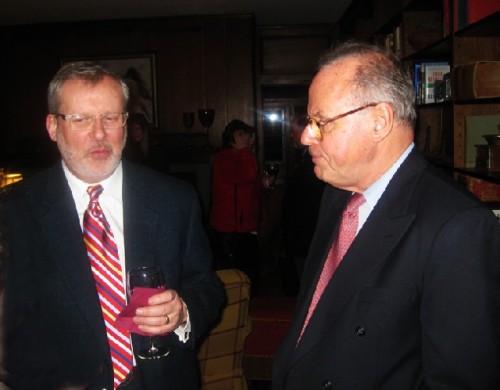 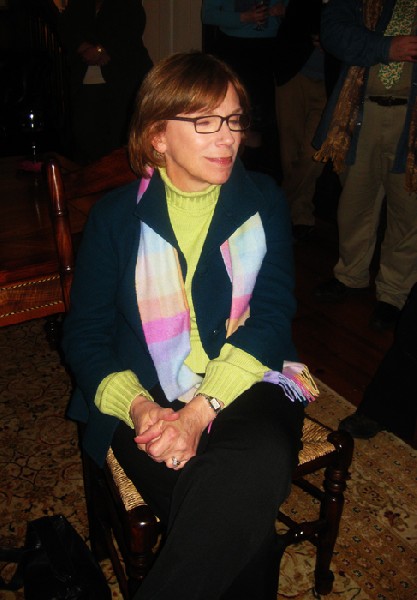 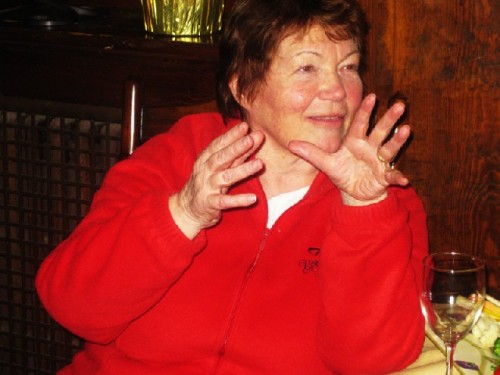 On a briskly frigid winter night there was a glowing hearth in a book lined, cozy room of the Inn at Richmond. The lodging is located just around the bend from Hancock's renowned Shaker Village.

The occasion was a gathering of Berkshire arts leaders in support of the run of State Representative, Dan Bosley, Democrat from North Adams, for the job of Berkshire County Sheriff. He has served in the Massachusetts House of Representatives, since 1987, and is currently the vice-chair of the committee on Bonding, Capital Expenditures and State Assets.

In a brief speech he noted that some $51, 000 a year is spent on inmates compared to just $3,000 for students. While sensitive to the perception of being soft on convicted criminals he described his mandate as rehabilitation and education. The challenge is to break the cycle of the mostly young inmate population. Generally they lack education and have issues with substance and alcohol abuse.

He speculated on how to break the pattern of recidivism in which released inmates with few skills and prospects return to bad habits leading to crime. Bosley noted an earlier program, since terminated, in which inmates were able to earn credits toward a college degree. That program, which became a political liability, was largely successful in giving former inmates a secure future in society.

With some candor, after years of commuting from North Adams to Beacon Hill, he looked forward to the chance to "sleep in my own bed" as well as to attend more of the many arts events represented by the blue chip group in the room. He added that his wife wants to hold on to the Boston residence.

After all those years of infighting on the Hill it is understandable that he would be enticed ny the prospect of running for Sheriff. It represents a pay increase, virtual tenure, and no heavy lifting. Particularly after a power struggle which entailed a decline in his former clout. He was a close ally of the former Speaker Salvatore DiMasi and has been accorded a lesser role by the current Speaker Robert DeLeo. Currently he is the vice-chair of the Committee on Bonding, Capital Expenditures and State Assets.

In the recent contentious North Adams mayoral race Bosley backed a long term ally, John Barrett III, who was defeated by Dick Alcombright. During his remarks he obliquely referred to a fear factor on the Hill regarding the shock of Brown claiming the seat of the Senate's most distinguished, long term liberal, the late Ted Kennedy.

The election of Brown, a litmus of voter anger, has legislators like Bosley watching their backs. With Bosley giving up his seat it will be interesting who announces for his vacated position in the First Berkshire District. It consists of the towns of Adams, North Adams, Clarksburg, Florida, Savoy and Williamstown, in Berkshire County, and the towns of Charlemont, Hawley, Heath, Monroe and Rowe in Franklin County.

Given the widely reported dissatisfaction with Governor Deval Patrick, another Berkshire resident, it is possible that voters, following the precedent of Scott Brown, will opt for a Republican. The Commonwealth has had "moderate" Republican governors in the past including Mitt Romney, who had presidential ambitions, and William Weld. Given the climate of voter rebellion  it is not assumed that Bosley's seat will be filled by a Democrat.

During the Richmond stump speech he reiterated, but did not elaborate on, his opposition to Casino gambling. He also affirmed long term commitment to  the Cultural Economy that drives the Berkshires. His remarkable support over many years was the reason that the room was filled with an A list of directors and administrators of Berkshire arts organizations from Shakespeare & Company, to Barrington Stage, Berkshire Theatre Festival, the Mahaiwe, Jacob's Pillow, Shaker Village, Red Lion Inn, The Clark and Berkshire museums.

During a brief Q&A he was asked for his position on wind power in the Berkshires? He sees it as inevitable but with sensitivity to site lines that do not interfere with  natural beauty.

Tina Packer, the founding director of Shakespeare & Company, rather frankly asked the question on the mind of everyone in the room. Stating that he had been a long time and valuable asset to arts organizations she asked "Why are we backing you for Sheriff?" She said with emotion, and nobody dissented, that "We need you in the Legislature."

Bosley had no compelling answer for Packer'tough question. He assured us that he will be on Beacon Hill  for another year.

Hedging my bets I asked Bosley that, if I back him for Sheriff, could I obtain a "Get Out of Jail Free" pass? You never know when it might come in handy. Quoting Jimmy Cliff, should he succeed in the race, I warned him of  Rastafarians.  But I didn't shoot the deputy.