The Berkshire Cure-All On March 1 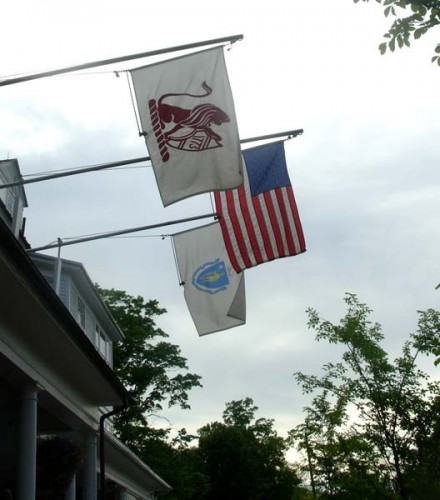 On Friday, March 1, seven chefs from the Berkshires organized by Brian Alberg, Executive Chef and Food & Beverage Director at The Red Lion Inn, will present “The Berkshire Cure-All” to New York's James Beard Foundation. The dinner will showcase the culinary talents and farm-to-table efforts of the region with foods prepared using time-honored preserving and curing methods.

The James Beard House is known as New York’s best-kept gastronomic secret. Located in the former townhouse of celebrated cookbook author and television personality James Beard, the James Beard House is in the heart of New York City’s Greenwich Village. Over 20 dining events are held monthly to showcase culinary artists from around the world, featuring multi-course dinners with wine pairings prepared by guest chefs.

This will be Alberg’s tenth visit to the James Beard House and the fourth time he has invited a group of like-minded Berkshire chefs to collaborate and present the multifaceted culinary artisanship of the region. “The Berkshire Cure-All” reception and dinner will include Stephen Browning, chef at Bell & Anchor (Great Barrington); Terry Moore, chef-owner of The Old Mill (South Egremont); Jamie Paxton, chef at The Meat Market (Great Barrington); Daire Rooney, chef at Allium (Great Barrington); Dan Smith, chef-owner of John Andrews: A Farmhouse Restaurant (South Egremont); and Zee Vassos, chef at Firefly (Lenox). Red Lion Inn Sommelier Dan Thomas will craft elixir-themed cocktails and select wines to accompany the dinner’s reception and six courses.

Alberg has been instrumental in galvanizing a Berkshire culinary movement – as a chef supporting local farms, as a farmer raising his own heritage breed pigs at his Bacon on the Side Farm, as a mentor for youth interested in culinary arts in the Railroad Street Youth Project and as President of Berkshire Grown’s Board of Trustees.

According to Alberg, “We collaborate on so many different levels and this dinner really presents an opportunity to put our creative differences and food views aside and work together as one large voice representing our region,” he said. “The ‘Berkshire Cure-All’ is a major play on words: We’re curing things with salt, acid and smoke in an effort to preserve the bounty from harvest season when a visit to the Berkshires can truly cure what ails you, whether it be with food or drink, all produced right here in our region.”

Announcing Beard in the Berkshires Week

In celebration of this year’s event at the James Beard House, several chefs will feature their “Berkshire Cure-All” course back home in the Berkshires the week following the NY-based dinner. The Red Lion Inn, The Meat Market, John Andrews Restaurant, Bell & Anchor and Allium will participate with menu items or a slight variation of their Beard offerings. Details available at www.berkshirefarmandtable.com

The evening will begin at 7 p.m. with a reception in the Beard House’s charming Greenhouse Gallery as guests enjoy an assortment of hors d’oeuvres. A seated tasting menu will begin around 8 p.m. The price is $130 per person for James Beard Foundation members and $170 per person for the general public. The James Beard House is located at 167 West 12th Street. For reservations, please call 212.627.2308.

Beginning at noon on Friday, March 1, a team from The Red Lion Inn and Berkshire Farm & Table will provide behind-the-scenes coverage of Berkshire chefs in the James Beard kitchen, offering fans a backstage pass to this prestigious event. This year, media coverage will include blog posts, Facebook and Twitter updates for up-to-the-minute storytelling as it takes place on-site in New York. To view the full menu, chef bios and more, visit berkshirefarmandtable.com/james-beard-dinner-2013/