A Soprano at the Helm 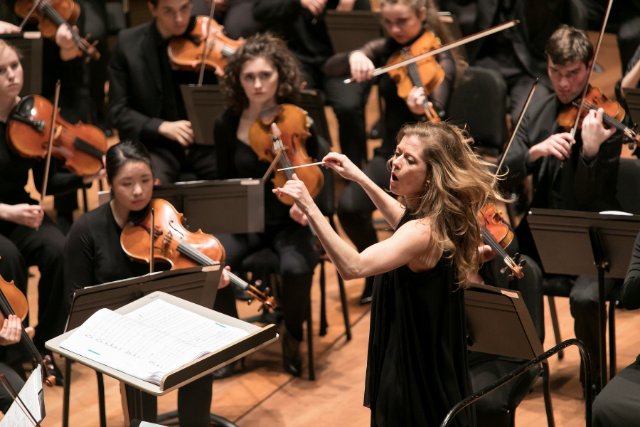 Hannigan with the Juilliard Orchestra. Photo by Rachel Papo.

Barbara Hannigan, one of the world’s leading sopranos, conducted the Juilliard Orchestra in a thrilling performance of Strauss, Haydn, Debussy, Sibelius and Bartok. This is her New York debut as a conductor. The orchestra responded with music-making worthy of concert halls across the globe.

Although the program was a pot pourri of composers, it was unified by Hannigan's commitment to each composition and her sensitive attention to detail, which never popped out of the phrases and lines, but instead gave a shapely emphasis.

Hannigan’s conducting style is inviting. She bends in to instrumentalists to invite them into a section. She spreads her arms wide to welcome. Her pointing gestures are less a jab than a “You, come on. Come in.” Body movements are not an effort to suggest interest, but grow organically from the music and her need to expose its secrets and richness. She is sometimes coiled like Riccardo Muti, with all the music inside her bursting to come out. Yet she holds it back for just the right moment. The sounds of the Juilliard Orchestra under her guidance were thrilling.

For all of Hannigan’s ferocity, she is modest. She did not intrude on fellow soprano Meghan Kasanders' space in Sibelius’ Luonnotar. Kasanders' rich, wide ranging voice easily traversed this most difficult tone poem. As the orchestra supported the singer, Hannigan concentrated on them. In a wonderful dual gesture, singer and conductor raised one arm at the piece’s conclusion and held their palms frozen in the air at the same moment, waiting for the powerful emotion of the music to calm.

Bartok’s Suite from The Miraculous Mandarin was originally a one act pantomine. The Hungarian State Opera was offended by the risqué plot and refused to premiere the opera. First produced in Cologne, it caused a scandal. The Suite was Bartok’s way of creating a path to performance. Hannigan’s zest revealed all the story's underbelly, the sex and compelling rhythms of robbery and murder. She is as fearless as a conductor as she is as a singer.

Her generosity was again evident in Emma Resmini’s flute solo by Debussy. Perched in the balcony, Resmini showed us all the dimensions of her instrument. The notes sang on the flute the way they would in the voice of a superb singer.

Hannigan has recently conducted the Cleveland Orchestra and goes on to Toronto. She ranks with the top conductors who also place music above ego. Glamorous, completely musical and committed to her forms, she is worth hearing whenever she’s within a hundred mile radius. Or just across the border or the pond.