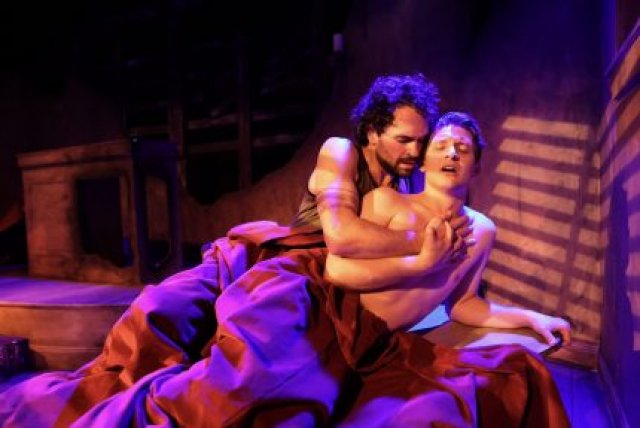 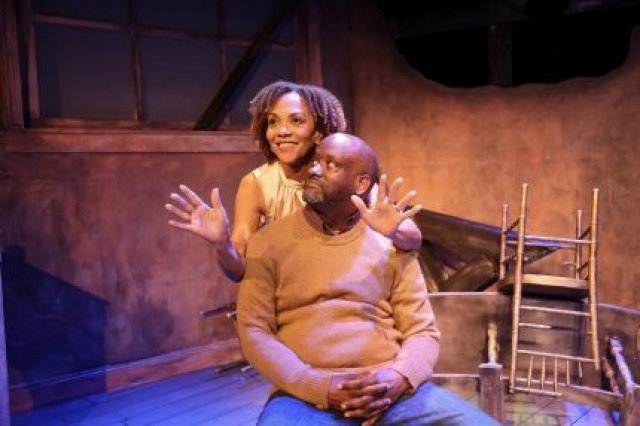 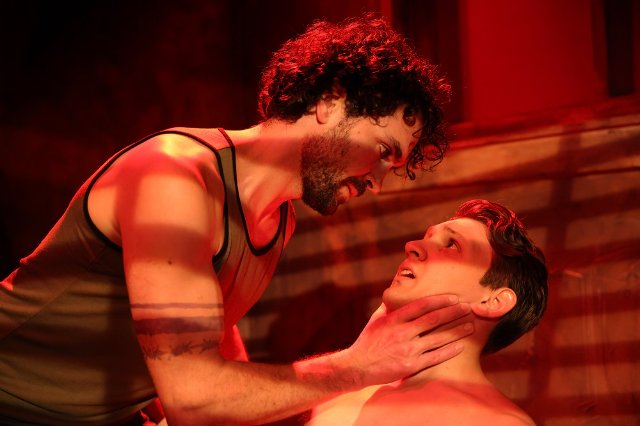 Shod, a gay man in Andrew Kramer’s sexy and searing, dark and disturbing new play, Armature, removes his white, sleeveless shirt. Surely, the tattoo we witness on his back sparks seconds of shocked silence – and perhaps later, spurs us to action. No doubt, the image burns itself into our minds — and we cannot easily remove it.

Speaking of fire, the incidents in Armature lead up to “The Burning.” The characters tell us nothing about it, but mention it several times throughout the play. And so, we sit still in suspense, until it tragically happens at the end. Meanwhile, the play is as steamy and sultry as a Tennessee Williams piece.

Such an experience awaits you at the intimate Island City Stage, near Ft. Lauderdale. The professional, nonprofit company in Wilton Manors is giving Armature a scorching world premiere production through Feb. 27.

Armature takes place in an unnamed American city, “before and after The Burning,” according to Kramer’s script.

In this thought-provoking piece, the playwright packs race, religion, sex, parenting, politics, and prejudice into what is surely a combustible combination with the state of the world today.

The play takes place, at least in part, in a decadent and dark gay bar called Armature. This establishment might call to mind the Kit Kat Klub in the musical, Cabaret.

Evan is a young entertainment blogger who arrives at the Armature either before or after “The Burning.” One of the play’s weaknesses is that the sequence of events is somewhat confusing. Specifically, it is not entirely clear what happens in which order. Regardless, Evan, who is young, gay, and passionate, arrives at the Armature seeking a story. While at the bar, he meets Shod, who is also gay, or at least bisexual, and “the most attractive man you’ve ever seen,” according to a description in Kramer’s script.

But there is also an unexpected ugliness to Shod.

Soon, Evan and Shod’s life becomes intertwined with that of a Black woman running for governor of her state, as well as her family. Tragedy results.

Meanwhile, the character of “Mama,” a man who runs the Armature bar, serves as a kind of master of ceremonies. One might describe him as a much less weird version of Cabaret’s Emcee. If Armature and Cabaret share anything more in common, both warn us against complacency in the face of prejudice and hate.

Certainly, plays about the LGBTIQA+ community have expanded widely in subject and theme since the early days of AIDS during the 1980’s. For instance, with the legalization of gay marriage in all 50 states in 2015, issues such as parenting arose. Rarely is it particularly helpful to make generalized statements. But with that said, we have not seen in life or on stage that many gay individuals who are also right-wing Republicans.

Shod is one of them. And that makes the tattoo that we see on his back particularly shocking.

Armature, which runs about two hours, alternates between scenes involving narration, those featuring love making, and suspenseful scenes. Kramer’s writing is wisecracking, unabashedly direct, at times vulgar, and always lively. If plays used the same ratings as movies, Armature would surely be Rated-R.

One of the play’s weaknesses comes during scenes featuring narration. More than once, a character will suddenly become a narrator to tell the audience about another character’s background. Transitions into these scenes can seem forced, such as when Mama announces “an interjection featuring Blythe.”

During these scenes, the character whose background we are hearing about unnecessarily repeats the narrator’s words verbatim. Or visa versa. Frankly, it becomes annoying after a while. For instance:

Blythe – When Evan was a boy, he liked to read. For holidays and birthdays all he’d ever ask for were books.

Evan – I’d only ever ask for books.

Evan – I liked the stories.

Blythe – He liked the stories.

Armature is at its best during highly-charged scenes that keep the edges of our seats warm. And each time Mama or someone else notes that we are approaching “The Burning,” a sense of dread and anticipation infuses us.

What is particularly hard to accept about Armature (and yet we must accept it) is that as we watch parts of the play, we feel as though we are tuned into the evening news during the present day. Indeed, parts of the play remind us that as far as society has come in terms of achieving equality for all, we have a ways to go…and we have even regressed.

Aside from a couple of blocking and light cue issues, Island City Stage’s production is riveting and believable.

Before the show begins, the curtain is open, and we witness the scenic design for the Armature bar. Robert F. Wolin designed the set, which suggests decay and destruction. Someone has apparently knocked over several chairs. Parts of a wall are chipped away, burnt, or smudged from dirt. Windows are broken. Upstage, we see dark bars, and behind them, all is pitch-black. The set’s darkness and signs of destruction foreshadow what is coming. The main set depicts the bar. Wolin suggests other locales with minimal scenery.

Meanwhile, lighting designer Preston Bircher illuminates the stage with appropriate colors, such as red, which can stand for passion.

Directors Andy Rogow and Michael Leeds, with the help of sound designer David Hart and the cast, ensure that important moments in the play receive the attention they need. Also, the directors, who pace the production well, have created striking stage pictures.

Michael Ford infuses Shod with a low-key, easygoing demeanor. However, as Ford plays him, a sense of aggression and darkness hides behind Shod’s calm, yet sexy exterior.

Matthew Salas, as Evan, expresses the character’s varied emotions with conviction, yet remains sincere and natural. Salas injects the outspoken Evan with convincing passion and enthusiasm. You can hear it in the performer’s expressive voice, and see it in his wide smile and large dark eyes. You can also see convincing pain etched into Salas’s face and hear it in his broken voice later in the show.

Karen Stephens lends gubernatorial candidate Blythe grace and a passionate, assertive, commanding demeanor. Stephens’ strong-willed, high-strung, yet at times charming and playful Blythe clearly cares deeply about the issues that have convinced her to run for office.

As Blythe’s husband, Denson, Keith C. Wade saves his strongest moments for when the character reaches his boiling point and explodes. The force of his sharp, loud voice might make you gasp.

Stephens and Wade are convincing as a loving couple, as are Ford and Salas.

Kent Chambers-Wilson makes Mama a wisecracking narrator and observer of the action.

Without question, Armature deserves a long life in the theater. It is the kind of cautionary play that can not only raise awareness, but lead us to look inward and take action to better society.

Island City Stage’s world premiere production of Andrew Kramer’s play, Armature, runs through Feb. 27 at the theater, 2304 N. Dixie Highway in Wilton Manors. For tickets, go to https://boxoffice.islandcitystage.org/Home/Shows/ARMATURE. Performances are at 8 p.m. Thursday through Saturday, and 5 p.m. Sunday. You can also view a trailer at https://islandcitystage.org.