Intimate Apparel with a Score by Ricky Ian Gordon 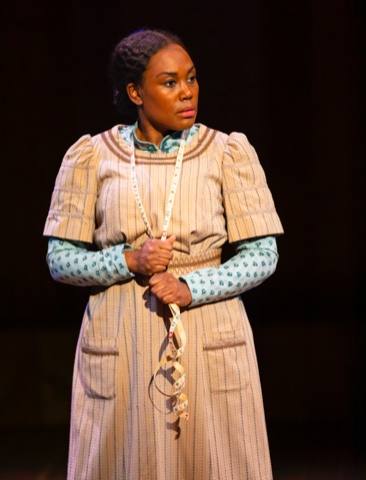 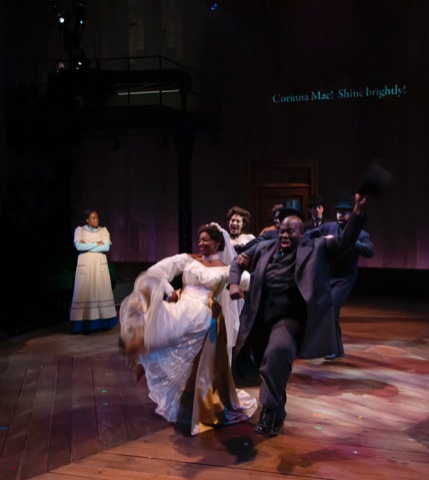 A happy wedding, which Esther's is not. Photo credit T. Charles Erickson 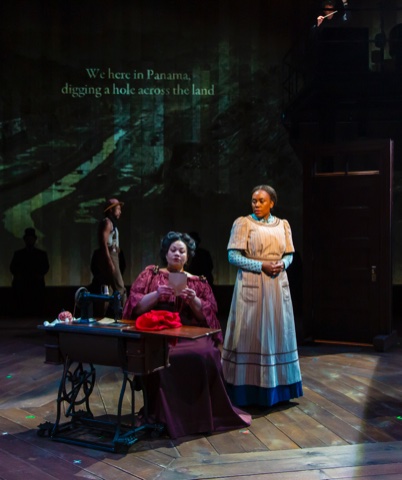 Justin Austin as George hovers in the background and Kerastin Piper Brown as Esther and Adrienne Danrich as Mrs. DIckson, the landlady. 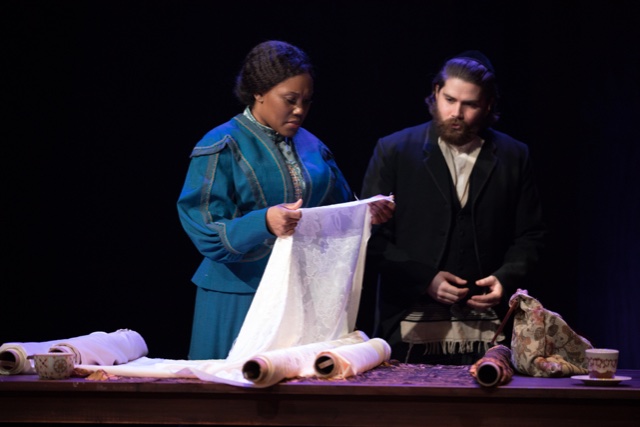 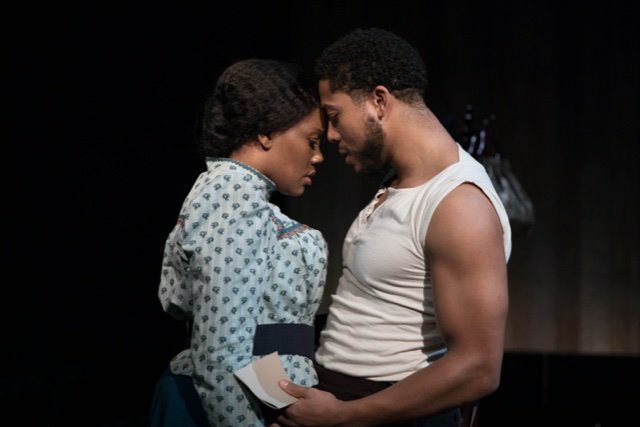 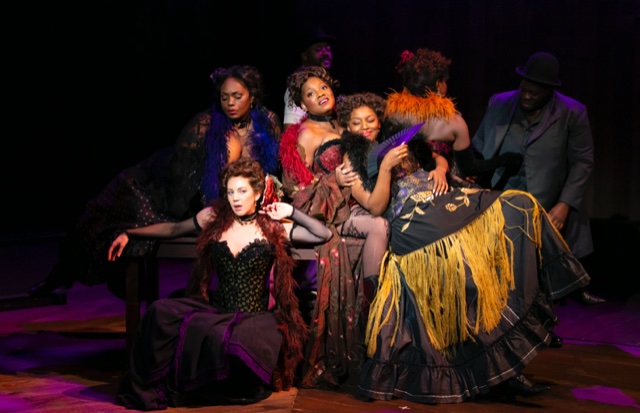 A pile up of prostitutes high on opium gives as sense of the many visual pleasures of this production at Lincoln Center Theater. Catherine Zuber is responsible for the Lucious, colorful costumes. Photo credit T. Charles Erickson

Lynn Nottage’s brilliant play Intimate Apparel has been incubating as an opera since 2007 when Ricky Ian Gordon was commissioned to write the music by the Metropolitan Opera and Lincoln Center Theater. Nottage speaks of development meetings with Peter Gelb of the Met and Andre Bishop of LCT, each tugging for their own interests. Bishop never had far to go, because he was responsible for the drama, which is built into the work at the highest level.  Gelb, who has determined boudoir dress and boobs drive opera attendance, got a bonanza with the play. The story of Esther, a seamstress living on the lower East side of Manhattan in the 1930s, has bustiers built in.  A frustrated Fifth Avenue society lady wants to look like Mayne, a prostitute walking the Tenderloin strip.  The smart but uneducated seamstress points out that while Mrs. Van Buren wants what Mayne has, Mayne wants what Mrs.Van Buren has.

The opera has taken a bit of dialogue about opera, reported as “a yawn” now.  The original was stronger.  Mrs. Van Buren asks Esther whether she has ever been to the opera. Esther replies, “Never.”  “Oh God, you’re lucky,” quips Mrs. Van Buren.

Intimate Apparel raises the bar for opera. Bishop likes musical theatre and through composed music. Gordon gives us this. In the first act, his light, delightful music accompanies recitatif. Two grand pianos are high above the back of the stage. Steven Osgood conducts from one side. Nathaniel La Sosa and Brent Punderbunde give us the orchestration on their keyboards.

The only recognizable song is about a Jewish merchant’s black suit. This is sung beautifully by Arnold Livingston Geis as Mr. Marks. He is a seller of fabric on Orchard Street who has taken a fancy to Esther  He appreciates her work ethic and also her taste for beautiful materials. Theirs is a doomed relationship and the most intense one in the opera. At one poignant moment,  Esther reaches out for Mr. Marks’ hand and is pushed off.  “It’s not going to turn you black,” sings Esther.  Mt. Marks sings, “Oh, no. In my faith I am not allowed to touch a woman who is not my wife.”  Esther is sung by Kearstin Piper Brown, a remarkable artist whose clear rich voice is at one with the playwright's words and feelings.

Gordon’s music deepens as their relationship does.  Mr. Marks is the only member of his merchant family who did not sew. Esther may make him feel whole.

Esther is an unmarried virgin at 35.  Out of the blue, she receives a letter from a man who is helping to dig the Panama Canal.  George Armstrong introduces himself as a workmate of her deacon’s son.  Esther cannot read or write. Mrs. Van Buren is her first ‘Cyrano.’  She detects innate elegance in the perfection of George's writing and in his gentlemanly tone. Mayne, asked to join the love letters crew, brings more suggestive heat to the correspondence.

In the play, Mayne wears a white Holiday-prequel camellia. It is now red in the opera.  Krysty Swann sings and plays Mayne broadly with both swagger and sweetness. She has a big voice which is colored warm and lusty.

George is introduced from Panama and makes cameo appearances from abroad before he enters the boarding house world. Justin Austin will be called a songbird by Mayne. He has a rich, seductive voice which attracts.

One misses the 2004 theatrical production for which Harold Wheeler wrote original music.  In that production Mayne performs and sings at her piano. She does a "clumsy rag."  It is music from the period. Gordon chooses not to set the period in his opera. He does compose with intensity and greater rhythmic variety as Esther’s world collapses in the second Act.

A chorus has been added.  They are sometimes maids in an elegant Fifth Avnue apartment, and sometimes the other women living in the boarding house both Esther and Mayne call home. At one point, prostitutes are piled up, high on opium and singing their hearts out. The chorus changes Nottage's human landscape. Her mentor Paula Vogel. noted that Nottage's "continental maps of the human psyche" have never before been charted on the stage.

In opening the play up for opera, these figures may have been required.  Now they seem more useful as they move furniture on and off the revolving platform which is the central stage setting. This will be familiar to audience members who have seen director Bartlett Sher’s work. While the revolving platform gives the opera a compact form and suggests the characters all live in the same world, it does not help define individual characters that an earlier production by the Connecticut theatre did in its multi level platforms. Then the top platform room was Mrs.Van Buren’s, reflecting her upper class position. The bottom was George Armstrong’s. He is a common laborer.

In the 2004 Roundabout Production, set designer Derek McLane gave a sense of individuality as well as commonality. The opera fails in its revolving setting. Bringing Esther and George close together for more than moment when their correspondence is read aloud but they are thousands of miles apart, may have felt necessary to indicate the kind of budding romance we know today as online match-making, but it makes them too close. In her notes for the play, Nottage suggests a few moments together in a crossfade is enough. This is still a faux affair, which is fulfilling Esther’s dreams. Her landlady, the bustling Mrs. Dickson, warns her about falling in love with someone she does not know. The urgency of this message is underplayed in the first Act.

The composer and director are blessed with the extraordinary characters Nottage created. She has imagined the world of her great grandmother who came to New York from Barbados and also worked as a seamstress.  The tenderness she feels for her character may come from this familial recreation. The soft trills and gentle runs of the Gordon score feel tender in a hard-nosed tale.

When it turns out that George also had a ‘Cyrano’ and that both Esther and George have fooled each other, the world for a moment crashes.  Gordon gives us the crash.

This is a wonderful evening of theatre.  Whether or not it is an opera is a question. Maybe, as Mrs. Van Buren suggests, we’re lucky it is not Maybe, instead, a grand opera opportunity has been lost.

The singing is first-rate throughout.  Many of the artists have been developed at the Metropolitan Opera. To see them up close and personal is a treat. Smaller Met productions, first envisaged by Sir Rudolph Bing in the early 1970s, can be cast with the first-class talent often left to fill minor roles in the Big House.

Chamber opera is an intimate form, well-suited to contemporary tastes. The Mitzi Newhouse Theater served perfectly as a venue for Nottage's important work.

In a limited run at Lincoln Center Theater.  Tickets here.