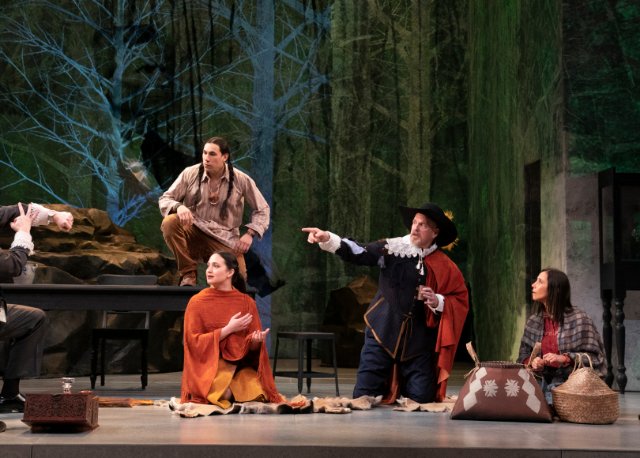 Manahatta, now at the Yale Rep through Saturday, Feb. 15, offers a great deal to think about. It is getting its east coast premiere, having had its initial production at the Oregon Shakespeare Festival in 2018.

So much is positive about this work and this production that one feels like a Grinch to complain.

The play is written Manahatta, by Mary Kathryn Nagle. an enrolled citizen of the Cherokee Nation, a lawyer, writer and activist. She is the first Native playwright to have a work performed at the Yale Rep.

Manahatta is set in two time periods and two locations. The modern period, takes place just before and during the mortgage banking melt down in the 2008 in both New York City (Manhattan specifically) and two locations in Oklahoma.

The other parts of the play is set in Manahatta, the name the Delaware Lenape gave to the island. They were settled on the island when the Dutch landed. While history books talk about Peter Minuit, the Dutch governor of the island, “buying it” for $24, the reality was very different. At times characters from the two periods interact.

In the program, Nagle says of the Lenape, “A Tribal Nation whose story has been erased, but whose language gives rise to the name Americans use today for that land, it is the simultaneous existence of erasure and perseverance.”

The play opens in modern day Manhattan, where Jane is being interviewed for a position on Wall Street. A Lenape and an MIT grad, she is hired to close deals which involve the sale of blocks of mortgages to investors. But as she is being interviewed, her father is undergoing open heart surgery in Oklahoma.

The next scene is Jane arriving home for his funeral; the surgery was not a success. We meet her mother (also called Bobbie) and her sister, Debra, as well as Luke and Michael who is both a pastor and a banker. All except Michael are Native American although Luke was adopted by Michael.

But you may get confused when Jane and Luke (who is now in Native American dress) interact in what appears to be a wooded area. You will later learn that they are Le-le-wa’-you (Jane) and Se-ket-tu-may-qua (Luke), and the wooded area is in Manahatta.

The play continues to switch among the three. Bobbie is having financial difficulties after her husband’s death and Michael suggests that a mortgage on the property might help her pay the medical bills. Luke, at one point, argues with his adopted father that Bobbie doesn’t understand the concept of the mortgage and an adjustable rate one at that and that she won’t be able to make the payments. Michael dismisses his concerns.

In Manhattan, Jane is having difficulty closing a sufficient number of sales; she is overly concerned that the underlying mortgages in the bundles are not sound. Her boss, Joe and his boss, Dick are about to fire her, when she proves that while she might not be able to close deals, she is great at getting new customers.

We also have scenes of the Dutch: Peter Minuit, the Governor and his aide Jakob and then the newly arrived minister Jonas Michaelius.

What is interesting in the play is the parallels between the modern and colonial characters. It is abetted by having the same actors play the similar roles. Thus T. Ryder Smith plays the modern day minister/banker as well as the Dutch minister, Jonas who is dependent on the East India Company for support.. Jeffrey King is both the investment firm boss (Dick Fuld) and Peter Minuit.

The parallels also include the attitudes.

After the Dutch “buy” the island, they try and succeed at pushing the Lenape out, often using violent means. As the mortgage crises causes Wall Street firms to go under, Bobbie is facing foreclosure. While the Dutch reverend, Jonas seems to have concerns about the actions of Minuit, his modern counterpart, Michael has no concern for Bobbie’s future.

In each case it seems as though secular world has coopted the religious world.

The play is marked by fine performances: all of the actors portraying the Lenape are Native Americans. Carla-Rae (Bobbie), Steven Flores (Luke), Lilly Gladstone (Jane) and Shyla Lefner (Debra) are equally good in both the modern times parts of the play and the historic parts. The same can be said for Jeffrey King (Dick Fuld/Peter Minuit), T. Ryder Smith (Michael/Jonas) and Danforth Comins (Joe/Jakob).

Director Laurie Woolery has done a fine job with this work, though at times, I was confused which time period we were in, at least initially. Once I grasped how the concept was working, I could make the switch easily. Partly this was due to the fact the women characters made few changes in their dress except perhaps adding a shawl; the men on the other hand wore costumes that made it very clear whether it was modern times or Colonial times.

Yet the play could have moved quicker. Though it was just 80 minutes, it seemed to drag.

The play also brings in the issue of language; at one point Bobbie talks about being sent to a boarding school run by the government that forbid the children from speaking their native language; Debra is trying to get funding to establish and maintain a program to teach the language. The Dutch are surprised when some of the Lenape (including Le-le-wa’-you), can speak.

It recalled Brian Friel’s play Translations about the efforts of the British to ban the speaking and teaching of Gaelic in Ireland.