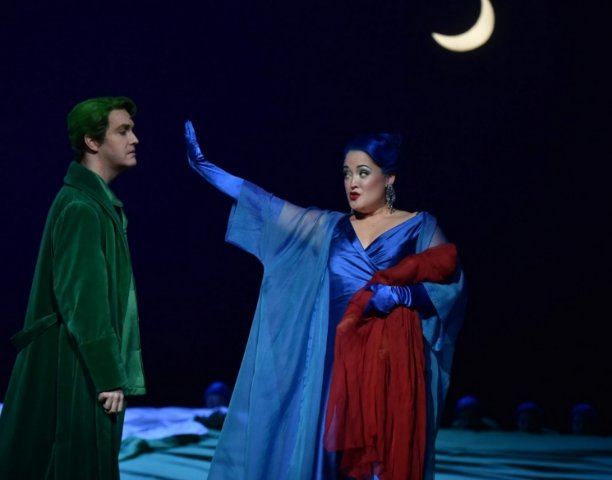 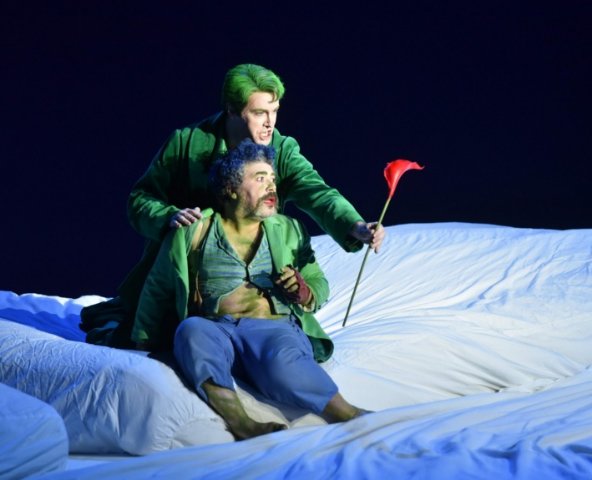 Oberon and Puck Making Magic with the juice of a flower. Tim Mead is Oberon. Miltos Yerelemou is the go to actor/acrobat for Puck. 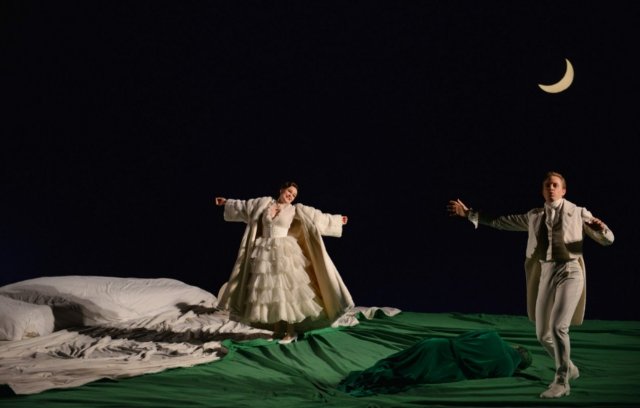 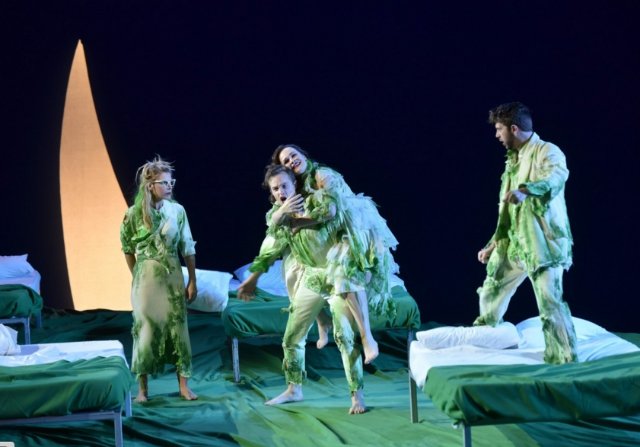 A cat fight amidst musical beds. Jarman, Miller, Ryan and McCallough form a quartet like Cosi Fan Tutti, but without Mozart's strings attached. 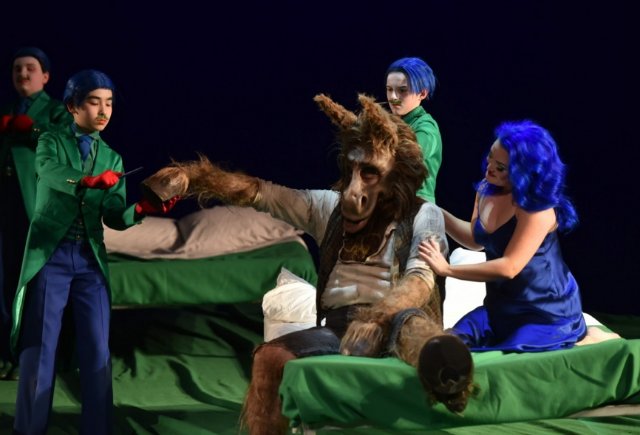 Who hasn't fallen for an ass? Matthew Rose and Anna Christy with the fairies. 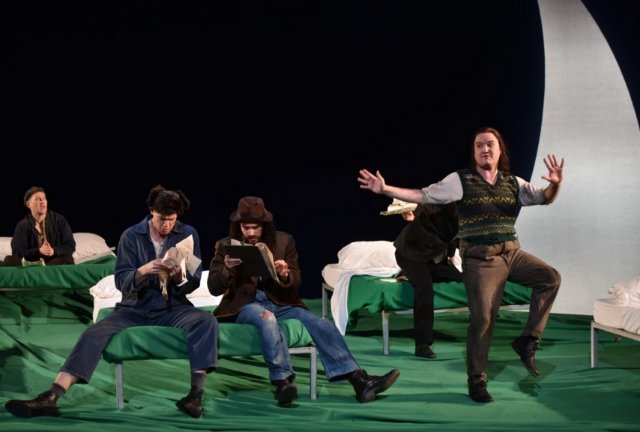 Rehearsing a play within a play. Rose as Bottom directs. 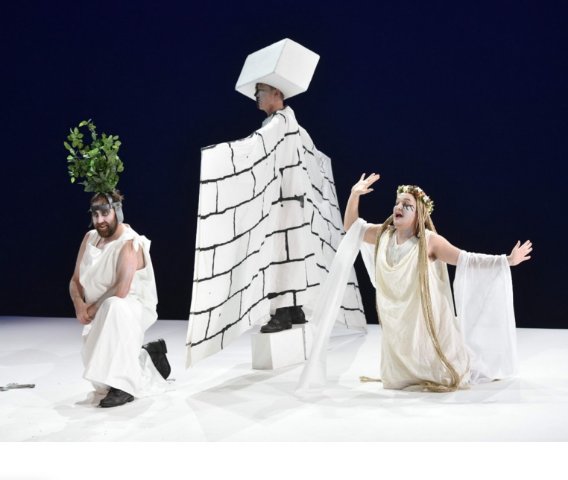 A wall for the ages. Peter Pears, co-librettist, played the original Thisbe. In this production, George Somerville plays the wall. 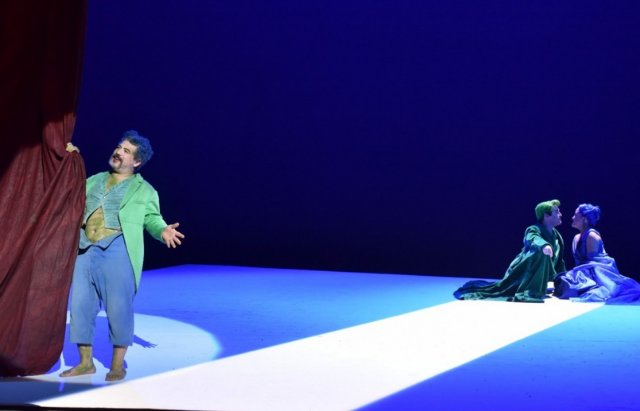 Puck tells us that all's well that ends well in a dream. Mead and Christy appear to have resolved matters.

Opera Philadelphia has mounted a delightful production of Benjamin Britten's A Midsummer Night’s Dream. The company reminds us, as it does so often, that opera can be highly entertaining and occasionally hilariously funny.

Created by Robert Carsen thirty years ago in Aix-en-Provence, the stage is full of royal blues and lime forest greens until all is resolved in white. A new moon hangs in the sky. Michael Levine has created costumes of matching blues and greens. Beds abound. Two huge pillows provide nestling opportunities for various characters as the play opens. Many beds then offer bouncing boards and also a place for worlds to meet, like Tytiana’s love affair with Bottom, who has turned into an ass. Three beds hung mid air, which descend slowly to the raked stage floor left the audience breathless. The tone is bawdy, as Shakespeare intended, and also rich in psychological insight.

The opera opens with a fairies choir of young boys coming over the hill (Philadelphia Boys Choir) singing in their pure and innocent sopranos. Britten was fond of giving children roles on the stage so that children in the audience could identify. The Academy of Music was full of children for Sunday’s performance.

Oberon (Tim Mead), the earthly king of the fairies and his wife Tytania (Anna Christy) who rules the heavens, are squabbling. Mead’s countertenor is a smooth alto and he relishes Purcell-like tones of his first set piece, "I Know a Bank."  It contrasts with Christy’s coloratura, which has a high range and an interesting lightly rough texture. She teases ecstatically in ""Come Now, a Roundel."

Tytania has returned with a young Indian boy in her retinue. Oberon wants to train the boy as his henchman and Tytania refuses to turn him over.

One of stars of the show is Matthew Rose as Bottom. For Rose, this is a signature role He entertains, even as an ass, and enchants us as well as Tytania, who doesn’t notice that he is animal, not man. As a matter of fact, she seems to prefer him to Oberon. Puck is also played by an iconic actor, Miltos Yerolemou, a touching comic and acrobat.

Opera Philadelphia often mixes emerging artists in roles to make the case for their prime position in the opera world. Soprano Georgia Jarman has distinguished herself in the challenging role of Agnes in George Benjamin’s Written on the Skin. She rewards singing Helena. Sienna Licht Miller sings Hermia and displays a voice as lovely as she is. She carries the theme of ‘beauty’ which intrigued Shakespeare.

All the performers deserve call outs for distinguished performance. The revival director Emmanuelle Bastet gives nuanced emphasis to each character. Dances by Matthew Bourne both underline and elevate the story line.

Necessity breeds invention. The work premiered at Aldeburgh, Britten's festival location.  A very small new hall had been built. The orchestral score is ethereal and quietly suggestive. Conductor Corrado Rovaris, a star in his own right, leads the orchestra, introducing Puck with trumpet calls, and Oberon with a mix of harp and celeste. Rovaris gives a sense of nocturnal magic and a dream world.

Punched up acting in a performance of Pyramus and Thisbe by the troop of rustics was very funny. Bottom was almost outdone by George Somerville playing the “wall” that separates the lovers. With arms spread wide, and turning on two blocks for feet, the "wall" with all its current overtones brought down the house. Puck's final declaration that this has all been a dream left us with a feeling of wicked fun. We have moved with Britten from the intense tragedies of his earlier operas to healing comedy, a time for merriment.