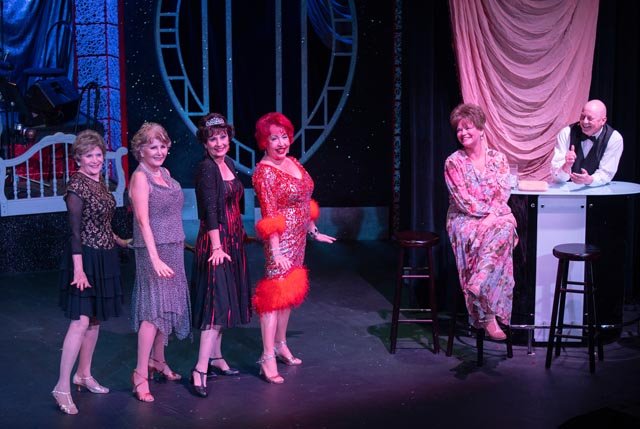 As theatre and society, in general, evolve, especially here in the United States, “Ballroom,” the new reimagined musical is a very appropriate production choice for CVREP to present to its 2019/2020 audiences. It’s another crowd-pleasing show that fits the 2019/2020 season theme of “New Beginnings.”

It’s also the boldest and most audacious production in CVREP history.  The Cathedral City-based theatrical company headed by Founding Artistic Director Ron Celona, now in its 11th season of producing quality Equity productions here in the Coachella Valley, has become a beacon for more professional actors and creative artists who want work in the Valley’s newest, state-of-the-art theatre complex.

What began as a dream of Ron Celona’s long-held desire to create an Equity Regional Theatre in the Coachella Valley eight years ago is now a reality.  The stakes were high, but the passion and skills, plus hard work and the generosity of some of the Valley’s loyal Patron’s of the Arts, along with Celona’s dedicated and committed Board of Directors has won the day.

The birth and chronology of “BALLROOM” is as follows:  Born in 1975, it became an Emmy-winning feature film made for TV as a musical starring Maureen Stapleton and Charles Durning.  In the late 1970s, the show was refashioned into a musical play which had a short-lived run on Broadway and was filed away wherever failed Broadway shows go to die.

In 2019, however, artistic director Celona became interested in reviving the project as an updated musical that would make an excellent choice for his CVREP theatre to kick off the 2020 decade.  “BALLROOM,” like the Phoenix rising from the ashes, became a viable project again.

The production features the music of Billy Goldenberg, with a libretto by Jerome Kass, and the lyrics by multiple Oscar, Emmy, and Grammy award-winning songwriters Alan and Marilyn Bergman, under the direction of Ron Celona.

The production boasts a talented cast of twenty-four professional performers ranging in age from 50 to 70, making this entertaining and relevant musical a natural fit that should appeal to Valley audiences of a certain age – that includes both men and women.

The story centers around Bea Asher (a wonderfully sensitive and nuanced performance by Melodie Wolford), who is recently widowed.  Her Morrie (never seen) was her Prince Charming, who did everything for her in his loving and adoring husband way.  But now, Bea must learn to do everything for herself.  It’s a new beginning to Bea’s life that will test her as a respectful widow who now has to carry on with her life.  A life filled with many surprises that lie ahead.

The opening bittersweet number “Who Gave You Permission?” brings lumps and misty eyes to many in the audience.  Its ambivalent lyrics sets a haunting tone, not only to the song sensitively performed by Ms. Wolford, it’s also a definite “grabber number” that should bring every Ladies Club member in the Valley clamoring for tickets to see it.

Bea’s support group to ease her passage as a new widow (actually, Morrie has been gone for over a year) consists of her older, overly protective, tradition-bound sister Helen, played to the hilt by Marcia Rodd.  Almost every family has a relative whose advice is at odds with the feelings of the aggrieved.  After all, they think they’re only trying to help the survivor. Helen’s understanding husband Jack is cleverly and understatedly played by Bill Lewis.

Bea’s daughter Diane (nicely played by Aviva Pressman), and Bea’s son David, performed by Sean Timothy Brown, are puzzled at Bea’s interest in her newfound group of ladies who gather at the local Bronx dance ballroom; eager to dance, gossip, and get out of the loneliness of their homes every week. They thought their mom wasn’t interested in ballroom dancing anymore.  Ah, adult children… who only see their parents as “parents.”

What they didn’t see coming, however, was Alfred Rossi, a mild-mannered, shy, caring, mailman tenderly played and sung by Bill Nolte.  It’s easy to see why Bea has a renewed interest in ballroom dancing.  As a couple, Ms. Wolford and Mr. Nolte have nice on-stage chemistry that slowly draws them together, becoming a couple.

Solid supporting performances come from an energetic Angie, Bea’s hairdresser, that is winningly played by Teri Ralston, who first urges Bea to come to the Stardust Ballroom; Pauline, the current reigning Queen of the Stardust Ballroom, is nicely performed by Leslie Tinnaro, who sings and gets to name her choice for next year’s reigning Queen. Her ballroom co-host Artie at the microphone is sung and performed by Randy Brenner.

Jitterbug dances, sambas, tango dances. Rumbas and waltzes along with solid dance moves from Anthony Marciona as Petey, and Glenn Rosenblum as Moe, (sporting a Moe Shemp haircut of three stooges fame); from Terry “T-Mac” McLemore; and Lois Bondurich; Olga Morales; Lindsay Ouellette; Wayne Hundley, and Joe Mitchell as Joe the Bartender.  It appears that every bar, tavern, and gin-joint in the world has a Joe the bartender with broad shoulders to lean on and/or a sympathetic ear for listening to the lonely.  Frank Sinatra made millions by singing about those after-hours conversations.

Orchestrations for “BALLROOM” are provided by Richard Bronskill. The Eleven O’clock spot belongs to a clever, terrific musical number called “Fifty Percent” and the closing number “This Is More Than A Ballroom/I Wish You A Waltz,” both of which are sung by Ms. Wolford and both are winners.

Lighting Designer Moira Wilkie Whitaker provides just the right amount of light to see and appreciate the colorful costumes designed by Frank Cazares (although I’m not too sure about that kaleidoscopic-like cowboy jacket worn briefly by Mr. Brown).  However, the sharp choreography by Jose De La Cuestra neatly fills the stage with flowing movement and graceful dance moves.

“BALLROOM” is an impressive and delightful production that will have its audiences smiling as they leave the theatre.  The musical performs at CVREP, Cathedral City, through February 16, 2020. For reservations and ticket information, call the box office at 760-296-2966.