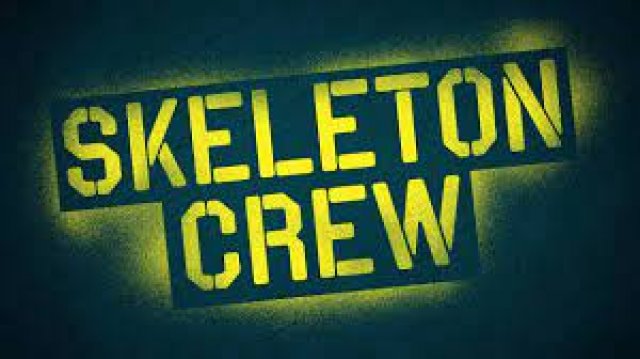 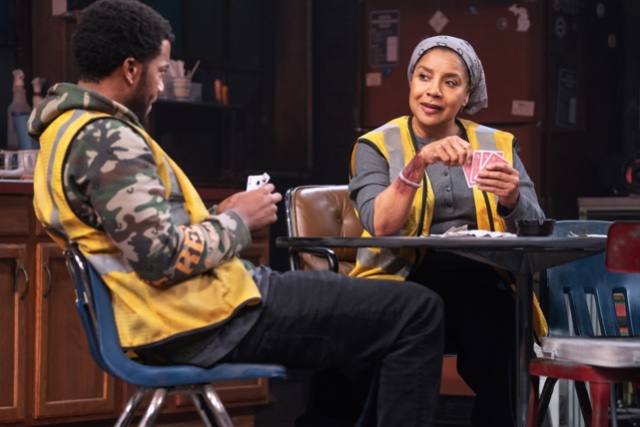 Phylicia Rashad loses it all to Joshua Boone. As Faye and Des they try to control the future in a Detroit automotive plant. 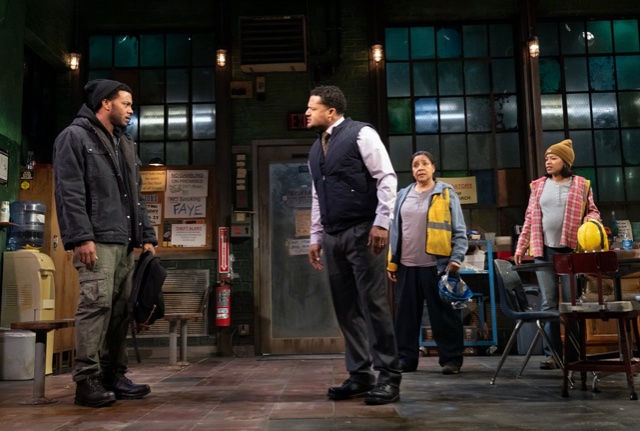 The quartet that makes up a skeleton crew. Brandon J. Dirden has been elevated to management. He is torn between his friends and his job. 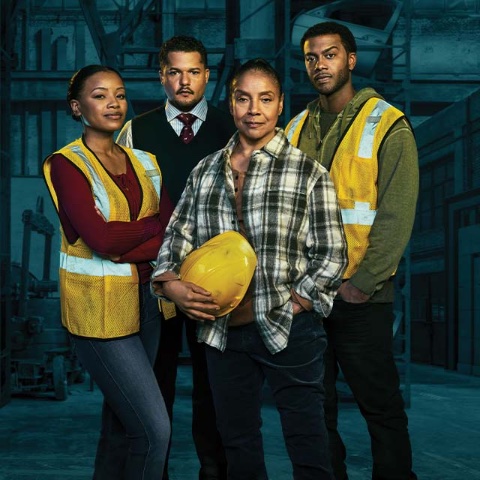 The magnificent quartet that bring us Skeleton Crew.

For Black History Month, Broadway has opened its arms and stages. Skeleton Crew, by an honored Black playwright, makes no mention of race. The cast is all Black. The characters are all Black. The city of Detroit, where the play takes place, has been felled by race riots and a hardhit economy.

Skeleton Crew is the third play in Morisseau’s Detroit trilogy. The playwright dedicates the play to her late father. He taught and illustrated the dignity of work. Her feelings for him spill over into the play, giving it a particularly rich feeling.

A classic Phylicia Rashad is Faye, the shop steward in an automotive plant soon to be closed. For decades Detroit residents have worked on the assembly line, supporting families, educating them and buying homes. Alternative work opportunities are sparse. Faye has gambled away her own chances, but heartily defends those of others.

Faye is trying to keep the skeleton crew left in the brake section of the plant optimistic and employed. Dez, the monumental Joshua Boone, is the realist. He works hard but is also preparing for the next work opportunity. Strikingly, he brings a gun to work. It is not aimed at anyone in particular. He feels unsafe coming to work.  This hits home hard because he appears to be strong and confident, not withering as he is falsely accused of stealing parts from the plant.

Parading around the break room, Chante Adams as Shanita displays an ever enlarging belly. She will not let the higher ups fire her for pregnancy. She is charming, feisty and seemingly prepared to go it alone as a Mom. The surprise of the play concerns her single status.

The most complex character is Reggie, who has moved up to the executive side of work, supervising his old friends. He is torn between supporting them and keeping his job.  Brandon J. Dirden etches the conflict with both subtle and broad strokes.

The playwright’s language is apt, yet poetic. The entire work is framed by the rapping of Adesola Osakalumi. Story telling becomes contemporary Black, in a tale set when the economy collapsed in 2007.  We meet Osakalumi at the play’s start.  Rapping continues on a ramp with porjections high above the rear of the stage.

Projections are rich in this production.  Often they show automobile manufacture, the work that anchors the story.  Huge machines, their particular music and their importance are made clear by the scenic team.  Michael Carnahan designed, Rob Kaplowitz also wrote original music, Nicholas Hussong contributed.  In addition to the rear stage projections, the proscenium has its own design, delightfully emphasizing graphic elements that contrast with the simple break room set and yet lead us into it. Lighting by Rui Rita and costumes by Emilio Sosa enrich our experience.

Ruben Santiago-Hudson directs to realize the full potential of each of the quartet of characters. He also allows a larger message to be felt and recognized. Our country needs manufacturing. We abaondoned it to China.  The human consequences of this defection are clear among the brake specialists in Detroit.

The current administration has made re-upping manufacture one of its goals. While financial institutions have supported research and development of new products, they have shied away from taking the next step, building plants. The government needs new institutions to provide this financial support.

Skeleton Crew suggests just how important manufacture is to the well-being of America. It is first and foremost terrific theater.