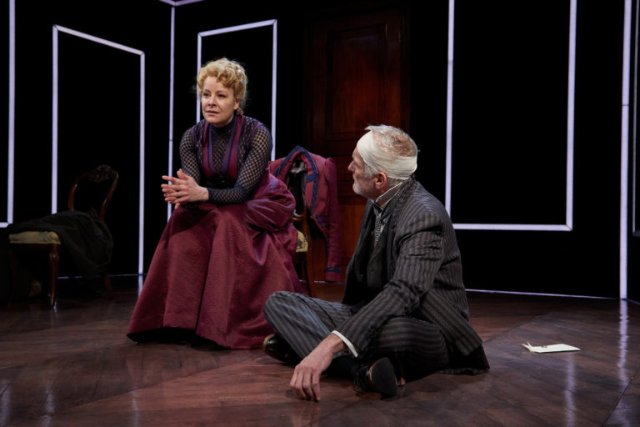 After Nora Helmar, the main character in Ibsen’s classic, A Doll’s House, slams the door leaving her husband and children, many have speculated about her future.

Playwright Lucas Hnath gives us his vision of the future for Nora and Torvald (her husband) in A Doll’s House – Part 2 now at TheaterWorks through Sunday, February 24.

Do you need to know the original work to enjoy Hnath’s sequel? Yes and no. It helps if you have some understanding on what happened in the original play, and why Nora left so abruptly. But if you are very familiar with the play, the inconsistences in Hnath’s work will bother you and detract from your attention to the work itself.

It might have been more successful, if it didn’t deal with characters and situations that were, to me, so familiar. The little details that Hnath got wrong, bothered me a great deal. One had to do with the time. Supposedly this takes place 15 years after the famous door slam. At the time, Nora was no older than her late twenties and Helmar not much older than that. So, logically Nora would be around 40 and Helmar possibly mid-to-late 40s. Yet Helmar looks much older and when discussing him others also act as though he is much older.

Most glaringly this shows up with their daughter, Emmy who was only two or three when Nora left. The Emmy who meets her mother, is a very self-possessed and mature young woman; not really believable for a 17 or 18 year old.

Hnath’s play has Nora returning after 15 years because she needs a favor from Torvald.

Her success and independence is threatened by the fact that Torvald never divorced her. Yet some cursory research reveals that Nora’s concerns were already changing in Norwegian law and society.

Nora has become a successful (and popular) writer whose works are feminist in nature. She promotes in her books the idea that marriage is obsolete for both men and women and should be abolished in favor of more fluid and temporary arrangements. She urges women to leave their husbands. She argues that a man or woman cannot pledge eternal love because people change and the person you love today will not be the same person in the future.

So Nora returns, entering a very austere drawing room, devoid of almost any furniture, paintings, etc. She has corresponded with Ann-Marie who is still employed by Torvald. If you know the play, you know that Ann-Marie was nursemaid/governess to Nora when she was a child and later to Nora’s three children. Nora doesn’t want to see Torvald so much as get Ann Marie to advocate for her.

But, of course, Torvald must unexpectedly return having forgotten some papers. He is shocked to see Nora – he almost doesn’t recognize her. Their conversations are both stilted and awkward as well as familiar.

By the end of the 90-minute play, Nora’s daughter has illustrated the price that she paid for her mother’s departure and Torvald has acknowledged, perhaps for the first time, the validity of some of his wife’s views. He truly has changed.

One problem with this play is that Nora can come off not only as smug and self-righteous but also as totally self-centered.

Director Jenn Thompson and Tasha Lawrence who play Nora have not overcome this problem. Like many a fanatic, Nora will not admit even the possibility of her ideas being wrong or having consequences for others. She feels she is owed what she is requesting regardless of how it may affect Torvald or her children.

Yet Lawrence does give Nora some warmth and motherliness so that we can see why she had cut off all contact during the period she was away. Sam Gregory is a milder Torvald who is more open to change than Nora is now. His sensitivity is a contrast to the earlier self-assured banker of the original play.

As Ann Marie, Amelia White shows us a gentler, less forceful view of the nursemaid/governess. She is truly caught in the middle; when Nora attacks her for the choices she made, you see her grow smaller.

Kira Player has the difficult role of the daughter Emmy. In her portrayal, the role is more of cardboard figure to counter Nora’s points than a real person.

Thompson uses an unadorned set with neon lights around windows and doors. This brings a touch of the modern into the play. In her director’s notes she sees the play as taking place both in the 1890s and 2019 and that somehow it illustrates the need for more progress today. The point she makes that I disagree with is Thompson says that Nora is “asking us to forgive and celebrate at the same time.” She may want us to celebrate her, but she see no need for forgiveness.

A Doll’s House – Part 2 certainly will get you thinking about Ibsen’s original work.