At Williams College Museum of Art 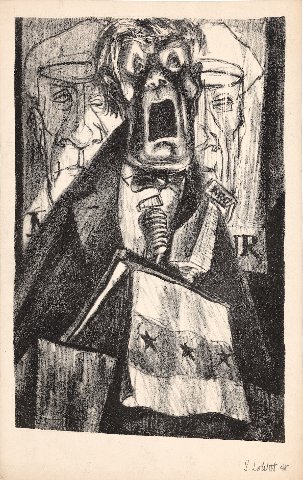 The conceptual artist Sol LeWitt (1928–2007) is best known for his programmatic wall drawings and modular structures, but alongside these works he generated thousands of lithographs, silkscreens, etchings, aquatints, woodcuts, and linocuts. Strict Beauty: Sol LeWitt Prints is the most comprehensive presentation of the artist’s printmaking to date, including single prints and series, for a total of over 200 individual prints.

The exhibition begins with the artist’s earliest prints: figure studies and scenes of urban life made at Syracuse University and in Hartford, Connecticut. LeWitt’s mature printmaking is explored in four thematic sections that reflect the diverse abstract languages he pursued throughout his career: “Lines, Arcs, Circles, and Grids,” “Bands and Colors,” “From Geometric Figures to Complex Forms,” and “Wavy, Curvy, Loopy Doopy, and in All Directions.”

Curated by David S. Areford, professor of art history at the University of Massachusetts Boston, the exhibition is accompanied by an in-depth catalog co-published by the New Britain Museum of American Art, Williams College Museum of Art, and Yale University Press. The exhibition and catalog highlight the essential role of printmaking in LeWitt’s oeuvre, deepening the understanding not only of the variety of LeWitt’s output but of the genealogy of his distinct geometric and linear formal language.

Printmaking played a pivotal role throughout LeWitt’s career. He discovered lithography in his junior year at Syracuse University and his early prints elicited his first professional recognition, including a group exhibition called Young Talent at the New Britain Museum of Art (then the Art Museum of the New Britain Institute) in 1949, as well as a cash award from the Tiffany Foundation that same year. The grant enabled the young artist to finance a life-changing trip to Europe. Italian art and architecture would become an especially important inspiration years later when he purchased a home in Spoleto. Links to his Italian influences, for example the architecture of Santa Maria Novella church (Leon Battista Alberti, 1456–70) in Florence and Leonardo’s famous drawing Vitruvian Man, are illustrated throughout the exhibition as Areford draws parallels with the prints on view.

After serving in the Army in Korea, LeWitt established himself in New York City, and his growing international recognition soon centered on his wall drawings; however, beginning in 1970, he rededicated himself to printmaking and continued this practice for the rest of his life. Areford argues that printmaking provided a perfect medium for the artist whose creative output was the visual realization of thought, and who famously said “the idea becomes a machine that makes the art.” In printmaking, LeWitt could begin with a defined concept, such as that expressed in the silkscreen series Lines in Color on Color to Points on a Grid (1978), and explore a multiplicity of outcomes through a mechanical process allowing both uniformity and variation. And while he began with a self-imposed set of rules and a desire to distance himself from the outcome, LeWitt’s prints nevertheless convey human expression in his own mark making, the decisions of various printmakers who carried out the artist’s instructions, and the occasional “errors” yielded by the process itself. Within the strictness of the artist’s plans and systems, LeWitt’s many prints demonstrate that, in Areford’s words, “ordered and logical ideas often result in contradiction and irrationality, especially in terms of the viewer’s perceptual experience and the captivating beauty of the artist’s colors, geometric forms, and diverse lines, bands, and brushstrokes.”

Several of the prints on view are based on LeWitt’s wall drawings or vice versa, as the artist’s visual concepts were not only experimentations with his own unique vocabulary of line, shape, and color, but were also dialogues with scale and space. Whereas the wall drawings become architectural elements, in relationship to the wall’s structure and dimensions, the prints are human-scale documents of an idea, designed to be more accessible, democratic, and lasting. Whirls and Twirls (2005), a kaleidoscopic rainbow of intertwined colored bands, is a stunning linocut on a nearly four-foot-wide sheet of paper. Its formal antecedent is Wall Drawing #1126, installed in 2004 on the vaulted ceiling of a library in Italy (Biblioteca Pannizzi, Reggio Emilio), a site-specific artwork evoking ready references to Renaissance murals. As a print, the design evokes very different links to medieval metalwork and manuscript illumination.

“We are thrilled to host this exhibition of Sol LeWitt prints at WCMA,” states Pamela Franks, Class of 1956 Director. “It is an extraordinary opportunity to share new scholarship on a pioneering conceptual artist, and to partner with the New Britain Museum of American Art, which is home to the one of the largest collections of LeWitt prints in existence. Strict Beauty also presents a spectacular opportunity for visitors to the Berkshires, which has been rightfully called ‘LeWitt country’ since the opening of Sol LeWitt: A Wall Drawing Retrospective at MASS MoCA in 2008. David first approached WCMA with the idea for this project in 2015, and so it is especially gratifying to see Strict Beauty come to such abundant fruition with the publication of the catalog in late 2020, the exhibition at New Britain last year, and now the presentation at Williams.”

LeWitt’s relationship to artmaking has been compared to that of a music composer, whereas he wrote or drew the instructions for a piece which only then comes to life through its performance or execution. “If LeWitt’s wall drawings are orchestral in nature,” says Lisa Dorin, Deputy Director of Curatorial Engagement, “perhaps his prints are like chamber music. There is an intimacy in the viewer’s experience which reveals the artist in new ways.”

Artist Bio
Born in Hartford, Connecticut, and raised in nearby New Britain, Sol LeWitt (1928-2007) was a pioneer of conceptual art and is considered one of the most influential artists of the second half of the twentieth century. His broad artistic practice included wall drawings, structures, photography, printmaking, artist’s books, drawings, gouaches, and folded and ripped paper works.

A landmark survey of Sol LeWitt’s printmaking practice
The conceptual artist Sol LeWitt (1928–2007) is best known for his programmatic wall drawings and modular structures, but alongside these works he generated more than 350 print projects, comprising thousands of lithographs, silkscreens, etchings, aquatints, woodcuts, and linocuts. This generously illustrated volume is the first to take a comprehensive look at LeWitt’s significant yet underexplored printmaking practice. Drawing together new archival research, interviews, and careful material and visual analyses, David S. Areford brilliantly situates LeWitt’s prints within the broader context of his serial-, system-, and rule-based approach to artmaking. The specific processes of print media, Areford argues, were perfectly suited for LeWitt’s particular brand of conceptual art, in which the “idea becomes the machine that makes the art.”

With over 400 illustrations, many never before published, this study offers a more complete picture of LeWitt’s oeuvre—and the essential place printmaking holds in it. The result will deepen the understanding not only of the variety of LeWitt’s output but of the genealogy of his distinct geometric and linear formal language.

Related Programs
Keynote lecture
Reversals and Rotations: Sol LeWitt’s Print Strategies
David S. Areford
Thursday, March 3, 2022, 5:30 pm ET, Zoom
When Sol LeWitt (1928-2007) embraced printmaking in 1970, after fifteen years devoted mainly to painting and sculpture, he homed in on the medium’s inherent technical and mechanical properties that best served his particular brand of conceptual art. As with his wall drawings and structures, the artist sought to relinquish some of his authorial control by allowing the motivating “idea”—articulated in a preplanned design or set of instructions—to dictate the final outcome (often in unpredictable ways). Printmaking, however, allowed possibilities not available in other media; and LeWitt was quick to exploit several print-specific strategies. Among the most productive was his use of reversal and rotation. Through these manifestations of process and movement, LeWitt created perceptually and intellectually rewarding experiences, ones that depend on foregrounding the subtle complexities of how prints are made.
Register for this free virtual program on the museum website.