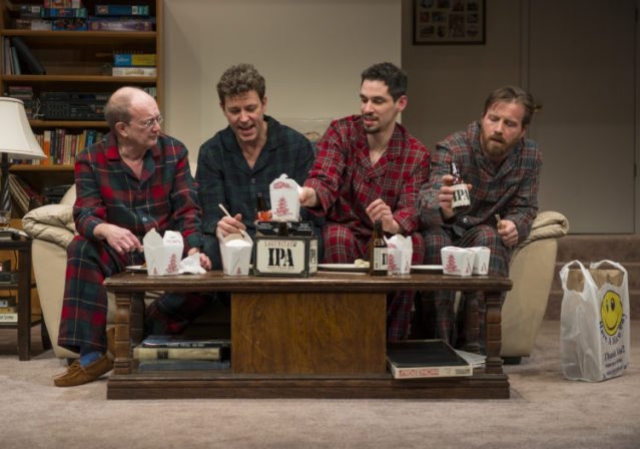 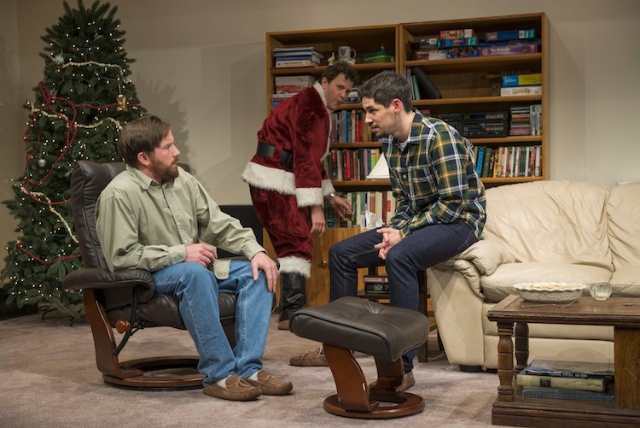 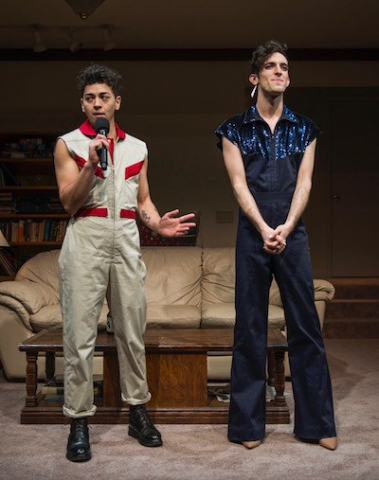 Matt rejects the American dream, but his father and brothers will have none of it. Straight white men rule the world. Matt has to be happy, use his skills and education to get ahead. Whether he wants to or not.

Young Jean Lee’s new play, which she directs at Steppenwolf Theatre, presents the existential crisis of being a straight white man, but rejecting its rule-the-world requirements. Lee frames this story of four straight white men by casting two gender non-conforming performers to introduce the play and to open each scene by carefully guiding the actors to their places, correcting their positions and attitudes before the action begins.

Two brothers—Jake, a successful banker (Madison Dirks), and Drew, a published author and academic (Ryan Hallahan)—have arrived at their Midwestern home to celebrate Christmas with their widowed father, Ed (Alan Wilder) and older brother, Matt (Brian Slaten). Ed is a retired engineer. Matt is hanging out at home, working as a clerk for a nonprofit.

The three brothers reminisce about embarrassing moments from their childhoods and engage in gross language and horseplay. Boys will be boys, even when they’re in their 40s. (I say that, not ironically, but from personal experience.)

Family traditions are reprised, as Ed brings out holiday pajamas for his sons to wear while they eat Chinese takeout at the coffee table.

Gradually, bits of lives are revealed, and Matt has an emotional moment that triggers concern by his brothers and father about the way he’s living his life. Does he need therapy? A better job? A loan to get rid of his college debt? But Matt is unwilling to change his life direction.

Lee’s play is very smart and funny and the audience laughs throughout. However, the play ends on a note of anxiety, leaving some audience members troubled about what to think about the play. Given its middle-class setting and seemingly traditional family relationships, Lee at first makes us think we’re seeing a story that’s familiar to us, when in fact it turns out not to be.

The four cast members are all excellent performers and believable as brothers and father. Lee paces the story well. Her staging and the scenic design by David Evans Morris are perfect in every way. The family room, done in beiges and beiges, has a dartboard on the wall, a tack board pinned with political notices, and easy access to Ed’s cache of snack foods, including a giant jar of pretzels.

The two gender non-conforming crew members are Syd (Syd Germaine), whose shirt displays “2 Cute 2 B Cis” on his back. The second is Will (Will Wilhelm), in a sparkly black outfit (which I would like to have in my size). They explain to us before the play begins that they both prefer the pronouns “they” and “their.” And their cast bios so attest. Syd and Will mingle with the audience in the aisles before the show begins to hand out ear plugs for those who think the loud rap walk-in music is too loud.

Over the course of the 90-minute play, it becomes clear that the brothers were brought up to understand that they were living with the benefits of white privilege. Their late mother was the driving force behind this effort. Among other things, she adapted the family Monopoly game into a game called Privilege. (The Denial card, formerly the Chance card, says, “’I don’t have white privilege because it doesn’t exist.’ Get stopped by the police and go directly to jail.”)

Lee has said she likes to work with the actors who will perform her plays and modify the script to make it reflect their experiences. The dialog and relationships of the three brothers, all in their 40s, seem very natural. The gross language and horseplay reminded me of the interplay among my sons and nephews.

Young Jean Lee is a Korean-American playwright, director and filmmaker. Her other plays include Untitled Feminist Show, We’re Gonna Die, The Shipment, Lear, and Songs of the Dragons Flying to Heaven. Straight White Men premiered at the Public Theatre in 2014. Lee has won many awards and has been recognized as an avant-garde, experimental playwright.