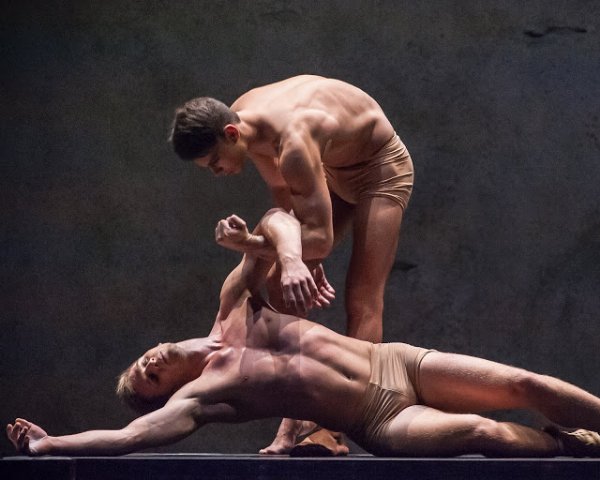 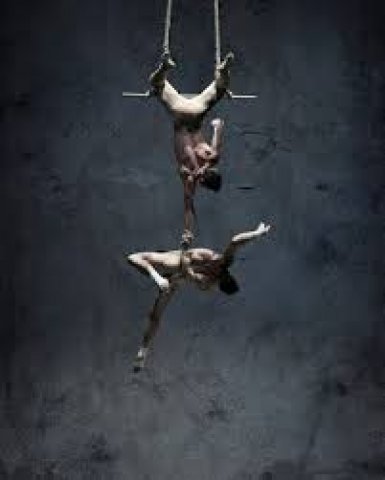 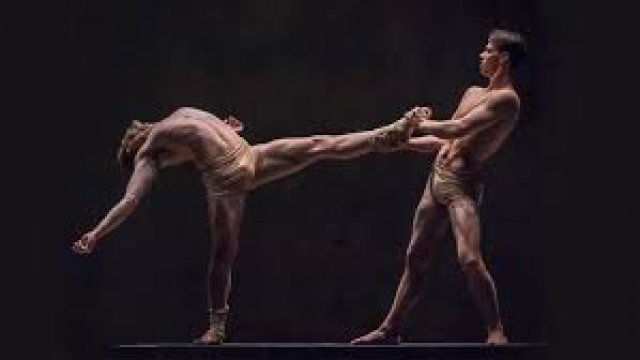 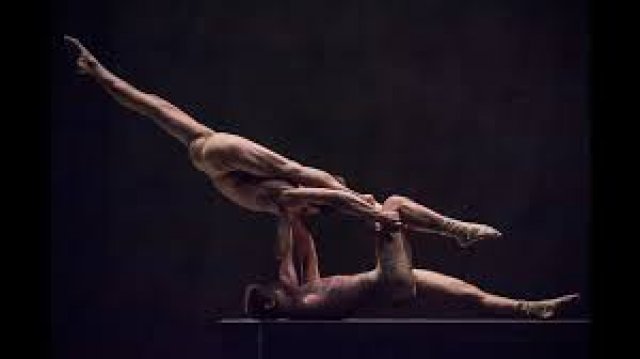 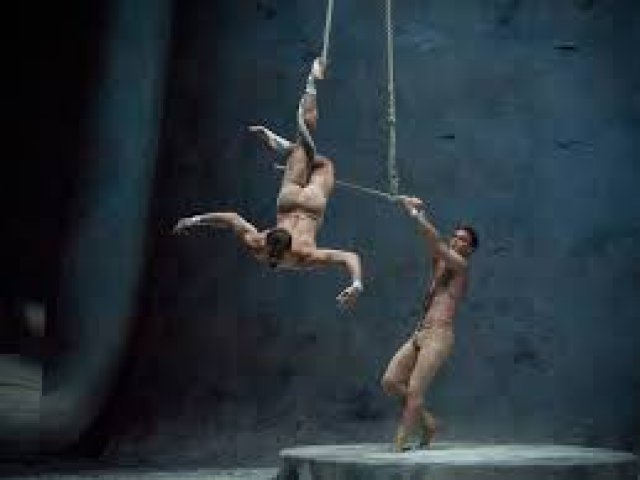 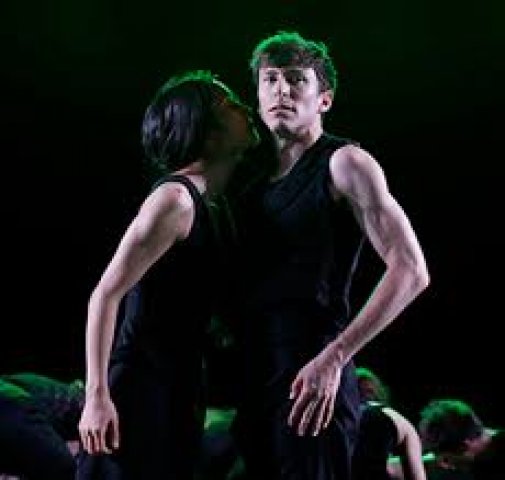 The Recirquel Company Budapest is presenting Non Solus at the Howard Gilman Opera House at BAM.  The front of the stage is swathed in a glimmering material that reflects like plastic and moves like silk. Behind the curtain, misty lights of yellow and white are haloed like a desert mirage.  The translucent curtain billows and then collapses in waves of light and texture.

It is not surprising in this setting to discover that the writer, director and choreographer Bence Vagi conceived this piece in the desert.  Reflected in fun house style mirrors on either side of the stage are images of the performers which feel like a mirage.  While the setting may seem simple, offering only circus props like a rope, a trapeze and hand rests, the performers Renátó Illés and Gábor Zsíros grip our attention as their bodies form fabulous shapes with many limbs and  unexpected curves. One started as a dancer and added circus skills. The other did the opposite. Yet always the twain will meet.

Vagi, a man who did not like to be alone, discovered that he need not be, for he was always accompanied by his own soul.  Sometimes the dancers are one. At other times, the soul accompanies the body.  And finally they are one.  This meditation suggests a sexual union as well as  religious one.  The music at times reflects a resonating heartbeat.  Bach is also deployed to create order and beauty when acrobatics get terrifying.

The power of Non Solus lies in its moments of virtuosity and in its moments of simplicity. The technical ability of performers Illés and Zsíros is breathtaking as is the endurance required to perform at such a high level for the duration of the hour-long piece. Had equal attention been paid to the dramatic development of the piece as a whole, we might have had a theatrical journey capable of matching the artists' technical journey.

At the outset, one performer hangs just below the proscenium, barely visible through semi-transparent sheeting suspended like a curtain in front of the stage. The obscured figure is a dancer in an aerial harness, descending from the ceiling, casting reflections of his movement on either side of the stage. It is alternately beautiful and frustrating, since we can't clearly see what's happening. Perhaps it echoes the ways in which we conceal aspects of ourselves from those around us.

This frustration is relieved when the performer tears down the sheeting at the front of the stage. Not only do we finally have a clear view, but the sheeting itself moves like water, flowing around the dancer who both manipulates it and responds to its movement. This is one of the most stunning moments of the evening-- a lone body moving in an unpredictable sea.

Following this exquisite moment, the dance choreography on the ground is beautifully executed but predictable. Most compelling are the ways in which the dancers' bodies are alternately reflected in the material at the sides of the stage and revealed behind it when the material becomes transparent. In one notable moment, one of the men is dancing center stage and a figure is seen moving separately in the reflection on one side of the stage, creating an echo of the featured dancer. Throughout, the two men seem to suggest shifting representations of internal and external experience.

The subsequent choreography for aerial rope is exquisitely performed, but its most powerful moments are not in its technically brilliant drops including a front dive into a double ramone, but rather in its simpler moments including a neck hang inside a rope loop and a one-armed hang while the apparatus descends toward the stage. At these moments, the body appears open and vulnerable, drawing us into the choreography and the experience of the performer on stage. The technical fireworks, as spectacular as they are, seem to distract from the inner drama, leaving us craving a clearer focus and intention. The rope choreography transitions into a short Spanish web sequence which is suggestive of one aspect of the self being driven by another. At the conclusion, the web setter carries the rope artist's collapsed body in his arms. Despite the beauty of this image, we are left wondering what happened to bring us to this point. Has one aspect of the self overtaken the other? It is ambiguous.

A trapeze appears onstage, and we see some lovely floor choreography in which one of the men moves fluidly under and around the apparatus. In this context, his neck hang ascent is seamless and breathtaking. The choreography is gorgeous, and the use of a lift to enable smooth transitions into and out of the floor is effective.

The solo evolves into incredible duo trapeze choreography. This section is filled with high level skills, impressive partnering, and breathtaking dynamic releases, but the most compelling parts are actually the moments in which the performers generate hanging shapes reminiscent of paintings in the Sistine Chapel. The virtuosity of the choreography is breathtaking, but more coherence in the section as well as further development of the spiritual imagery would have better served the development of the piece.

The fabric panel hanging upstage folds in on itself to reveal a dancer wearing a long, full skirt with an extended panel of fabric attached to a stick. Evoking the image of a whirling dervish, this segment is perhaps intended as a continuation of the spiritual elements apparent on the trapeze. The fabric manipulation is most successful in the concluding sequence of spinning choreography, which creates a satisfying shape and flow of movement. However, the choreography is less successful when the dancer is wrapped into the fabric, appearing lost in a tangle. The spinning dancer ultimately collapses, leading us to the final scene which takes place on a large, tomb-like box.

One dancer lies on top of the tomb while the other pushes it slowly downstage. The simplicity of this slow walking is stunning, with the dancer's effort enhanced by our view of him in the reflective material at the sides of the stage. What follows felt to me like a re-working of the crypt scene in Kenneth MacMillan's ballet, Romeo and Juliet. It is filled with sensuality and longing, but unfortunately the quality is interrupted when the “dead” dancer suddenly comes to life in order to base his partner. While the partner acrobatics are beautiful what they express about the relationship between the two figures is confusing as they attempt to express life and death.

Following this, the appearance of hand balancing canes seems abrupt, and the two men alternately moving in and out of handstands while impressive further distracts from any clarity of purpose.

The final image is a performer rising into the light, holding onto a cable with his teeth. It's an open, beautiful shape which suggests spiritual ascension.

Often the relationship of the two men feels simply functional, which makes sense in the context of performing high level circus skills but which makes less sense in terms of the development of the piece as a whole.

Although Illés and Zsíros are stunningly beautiful dancers/circus artists who elicited gasps of awe from the audience, the work’s overall lack of coherence and intention, as well as the lack of clarity in the shifting roles of the two men resulted in a work with limited theatrical impact.

Dancers who combine circus performance in their style, may thrill in form and in story telling.  Where they are sure to take your breath away and elicit gasps is the actual daring. When a dancer drops in seeming free fall from his partner’s support to grasp a trapeze bar, we fear for his life.  We too are on the precipice. Moments like these abound in Vagi’s work. It is an exciting evening of theatrical dance. (Chriselle Tidrick is a dancer/circus performer and runs AboveandBeyondDance.com)