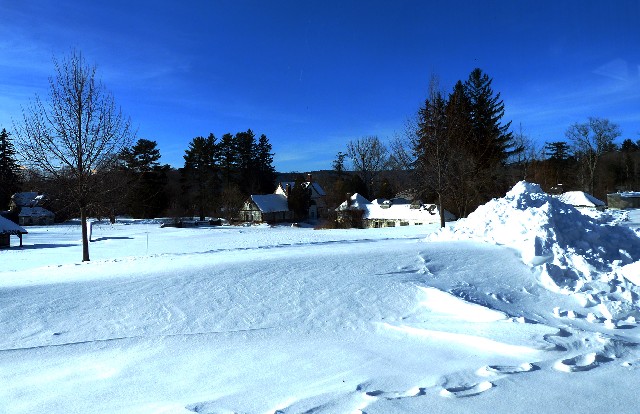 Shakespeare & Company in the dead of winter. Giuliano photos. 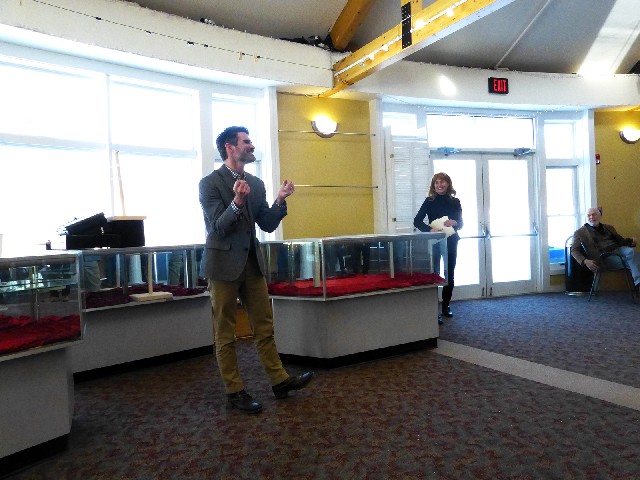 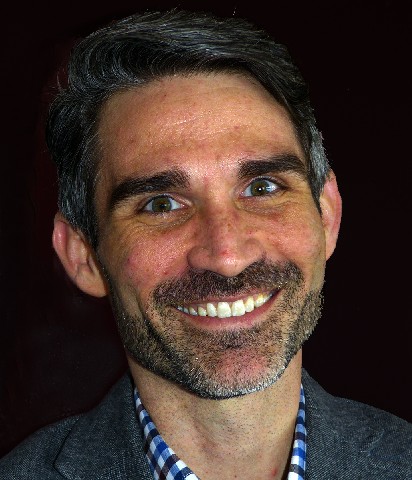 This is Dildine’s first season as executive director of the company.

On a bitterly cold winter afternoon there were thoughts of summer.

Before a gathering of trustees, staff members and a sprinkling of the media the new executive director of Shakespeare & Company, Rick Dildine, was in cheer-leading mode as he announced the program and provided highlights of the coming 2015 season.

There has been speculation about changes, possibly an extensive overhaul, to a venerable, widely respected company that has been struggling to crawl back from the edge of crippling debt. In the transition from founding artistic director, Tina Packer to Tony Simotes, there was extensive restructuring of debt that was viewed as saving the company from bankruptcy. While Simotes is credited with getting the company back on track the circumstances of his departure remain obscure.

The perception was that last year's programming, conforming to what appeared to be mandates from the board to emphasize works by and related to the Bard, fell short of expectations. Notably Simotes cut back on the number of plays, particularly an abundances of one person works, and allowed for more condensed runs. That allowed actors, particularly ones with busy schedules, to be liberated from season long commitments. When the economy took a dive several years ago Packer had the unique policy of reversing the economic challenge by putting on more and inexpensively produced plays.  The formula did not translate into a stronger bottom line. But on an artistic level it provided a lot of unique opportunities for the extended and richly talented company.

We were surprised to learn that the break down of classical Shakespeare and contemporary plays is just about identical to last season. Of the six primary productions on the Tina Packer main stage and Elayne P. Bernstein second stage the split is identical. There are two plays by Shakespeare, as well as one with a theme of Shakespeare, and three contemporary plays. For the third season, reviving its Berkshire roots, there is a production of Shakespeare on the campus of The Mount which was the original home of the company.

There are under the tent programs and special events. The popular benefit "Broadway in the Berkshires" has been shifted to the Mahaiwe in Great Barrington.

Mainstays of the company will be featured. Having toured with her original two hander, "Women of Will," partnering with Nigel Gore, Packer will star in a world premiere of Jane Anderson's "Mother of the Maid." One of the most anticipated performances of the Berkshire season will feature John Douglas Thompson in the British play "Red Velvet" by Lolita Chakrabarti. Thompson is well know to Berkshire audiences. He was last seen here in "Satchmo at the Waldorf." He has received rave reviews from New York critics. Currently he is playing Joe Mott in Eugene O'Neill's "The Iceman Cometh" with an all star cast at the Brooklyn Academy of Music.

Shakespeare & Company presents its lineup for the 2015 summer season, which includes three Shakespeare plays, Henry V, The Comedy of Errors and Hamlet, plus the Regional Premiere of Red Velvet by Lolita Chakrabarti, and the World Premiere of Jane Anderson’s Mother of the Maid, starring Tina Packer. In addition, the summer season includes The Unexpected Man by Yasmina Reza, and opens with the provocative new play by Sarah Treem, The How and the Why. The summer season was announced today by Rick Dildine, his first as Shakespeare & Company’s new Executive Director.

“I’m very excited about the season ahead, the talent we have assembled, and the titles we are presenting,” said Dildine. "From the most intimate and unexpected encounters, to timeless themes of parenthood and leadership, our season will take audiences to many different places, historical and emotional; always with a focus on language."

Shakespeare & Company’s summer season runs Memorial Day weekend through mid-September. In addition to the six mainstage productions this summer, the Company will present a run of Shakespeare and the Language that Shaped a World, written and directed by Kevin G. Coleman, under the tent at the Rose Footprint Theatre, and a production of Hamlet in the Dell at The Mount, Edith Wharton’s Home, directed by Jonathan Croy. The free and popular Fourth of July community event featuring the reading of the Declaration of Independence will also return to the schedule.

A number of special events were also announced this week:

• April book signing event (exact date to-be-determined) celebrating the release of Founder Tina Packer’s book, Women of Will on April 7.
• Broadway in the Berkshires returns once again, featuring Broadway's brightest stars in a special, one-night-only performance to benefit Shakespeare & Company's Education and Training programs. Producer and Company member Deborah Grausman teams up with Director Sam Scalamoni for this dazzling, much-anticipated summer event, set for August 3 at The Mahaiwe Performing Arts Center.
• Special limited engagement of Cry Havoc, written and performed by Stephan Wolfert, with two performances only on August 28 and 29.

SEASON OPENER
May 22 through July 26, Elayne P. Bernstein Theatre
The How and the Why, by Sarah Treem
From the writer/producer of House of Cards and In Treatment comes this smart-witted, sharp new play about men and women, love and conflict, genes and destiny. Directed by Nicole Ricciardi.

June 18 through August 23, Elayne P. Bernstein Theatre
Henry V, by William Shakespeare
Starring Ryan Winkles
This epic tale chronicles the infamous journey of a disaffected prince to legendary king. Ryan Winkles stars in the title role, as a man who sets out to repair his broken nation, prove his worth and win the affections of the French princess. Directed by Jenna Ware.

July 18 through September 6, Tina Packer Playhouse
The Unexpected Man, by Yasmina Reza, translated by Christopher Hampton
A middle-aged man and woman sit opposite each other in a train compartment on a journey from Paris to Frankfurt. He is a world famous author; she, one of his biggest fans, carries his latest novel in her handbag and ponders the dilemma of reading it in front of him. From the creator of Art and God of Carnage, this illuminating drama explores themes of intimacy, celebrity and second chances. Directed by Seth Gordon.

WORLD PREMIERE
July 30 through September 6, Elayne P. Bernstein Theatre
Mother of the Maid, by Jane Anderson
Starring Tina Packer
Penned by Emmy Award-winning writer Jane Anderson (HBO's Olive Kitteridge), this powerful, wry comedy follows the tale of Joan of Arc, as seen through the eyes of her mum who is doing her very best to accept the fact that her daughter is different. Parenthood, religion, sexuality and politics all play a role; Tina Packer stars as the Mother of the Maid. Directed by Matthew Penn. (rights pending)

(Jane Anderson’s Mother of the Maid was originally presented as a staged reading at the Berkshire Playwrights Lab during their 2014 summer season.)

SPECIAL ENGAGEMENT
August 28 & 29, Elayne P. Bernstein Theatre
Cry Havoc, by Stephen Wolfert
Using Shakespeare's timeless words, and a few of his own, Shakespeare & Company Training alumnus and US military veteran Stephan Wolfert performs an interactive play that weaves his own experience with some of Shakespeare’s most iconic military figures. A testament to the healing power of art and human resilience, this piece reveals how Shakespeare's audiences wrestled with the same hopes and fears that occupy our modern lives. (rights pending)

Other Stages and Special Events:

July 10 through August 15, Rose Footprint Theatre
Shakespeare and the Language that Shaped a World (SLaW), by Kevin G. Coleman
This fast-paced mashup of scenes, facts, sword-play and quotes from many of Shakespeare’s greatest plays is an accessible introduction to Bard and fun for the entire family. Directed by Kevin G. Coleman.

July 16 through August 22, in the Dell at the Mount, Edith Wharton’s Home
Hamlet, by William Shakespeare
Shakespeare’s masterpiece, performed ‘bare Bard’ style in a 90-minute performance outdoors at The Mount. Directed by Jonathan Croy.

Subscription packages for the 2015 performance season are on sale now; single tickets go on sale March 2. Shakespeare & Company will once again offer a 40% discount to Berkshire County residents. Both the Tina Packer Playhouse and the Elayne P. Bernstein Theatre are wheelchair accessible and hearing-aid assisted. For more information, call the Box Office at (413) 637-3353 during regular hours or visit www.shakespeare.org.

The public is invited to engage with Shakespeare & Company on its social media platforms. Tweet or Instagram comments to @shakeandco and include the hashtag #SCO15. Or add your comments on our Facebook page.