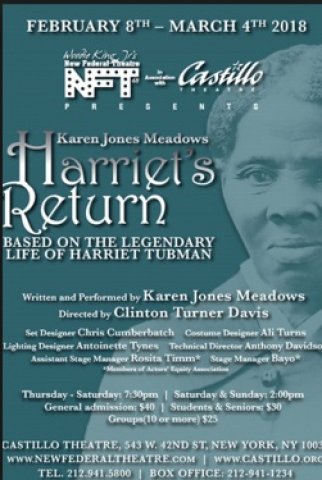 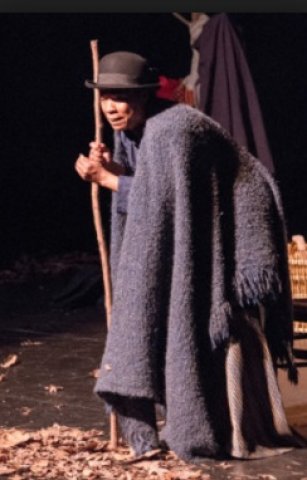 Harriet Tubman, a conductor on the Underground Railroad 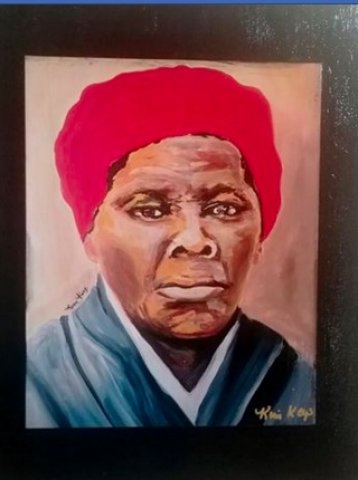 Harriet Tubman was recently suggested as a replacement for Alexander Hamilton on the US twenty dollar bill, but this honor has been delayed. We are left to remember, even more significantly, the life of a remarkable woman. Tubman not only escaped her plantation, wending her way north to freedom through strange and dangerous routes, she went back nineteen times to rescue others. Although her family and neighbors might be able to overlook physical and mental subjugation and being worked to death, she could not.

The evocative set by Chris Cumberbatch suggests the difficult escape route. The background is filled with tree trunks covered in an ominous green. Bare branches hang over the path to tangle and capture. Occasionally notes of the whip –poor whills cry out in the sweet gum swamp. Distant drumbeats suggest the distant origins of American slavery practices. Lighting by Antoinette Tynes changes pace with the mood.

The first seamstress of the Confederate flag, wrote of the region around Harper’s Ferry at the time of John Brown’s execution: “...there was the fear…dark, boding, oppressive, and altogether hateful. I can remember taking it to bed with me at night and waking suddenly oftentimes to confront it through a vigil of nervous terror...the rustle of the nightwinds in the oaks filled me with terror.”

One thing that tiny Harriet Tubman did not succumb to was fear. She joined John Brown’s movement. She missed Harper’s Ferry because she fell ill that day.

Meadows has created the story as multiple journeys. As a conductor on the Underground Railway, Tubman journeyed back and forth from south to north. During the Civil War, she was a guide and a spy. She knew the territory well from her underground travels. She nursed soldiers along her way.

She would start the National Association of Colored Women and work to advance women’s voting rights. In Auburn, New York, she bought 25 acres and farmed. She created a residence for the elderly and indigent.

Meadows' tale is set at a time fear sat on everyone’s elbow, but as Meadows re-creates Tubman, we see not only triumph over fear, but we come to ignore it as she does.

Clinton Turner Davis directs to highlight obstacles overcome. The play itself has a forward thrust, as Tubman is energized by her success. Davis also weaves dialects in which Meadows speaks with plainer English into a musical mix.

Before John Brown there had been Nat Turner and before him Demark Vesey, leader of a planned slave revolt in South Carolina. Into this long line of strong men comes the strongest of all, Harriet Tubman. Her portrait on stage at the Castillo Theatre is moving and holds you in its grip as almost a hundred years of Tubman’s life journey by.