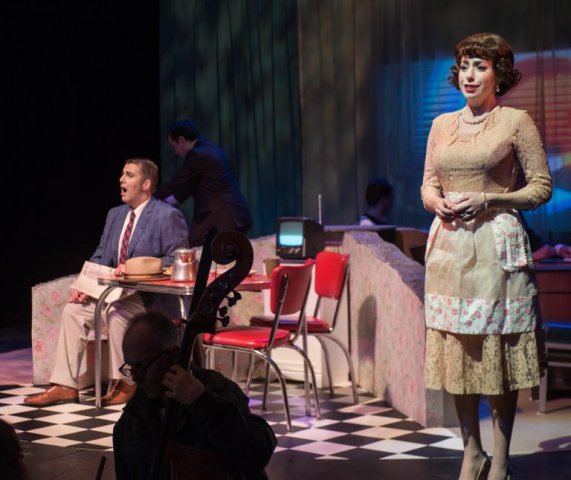 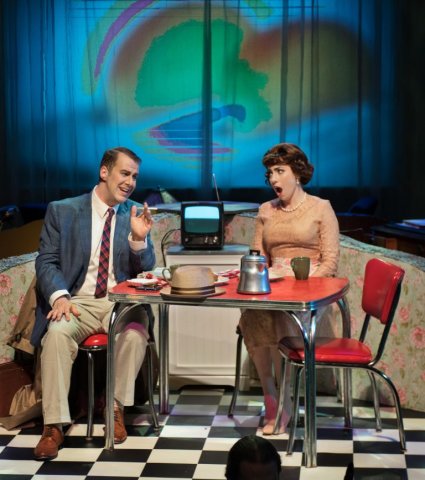 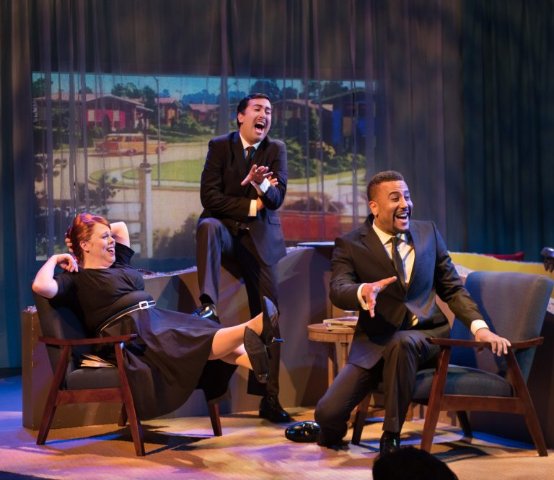 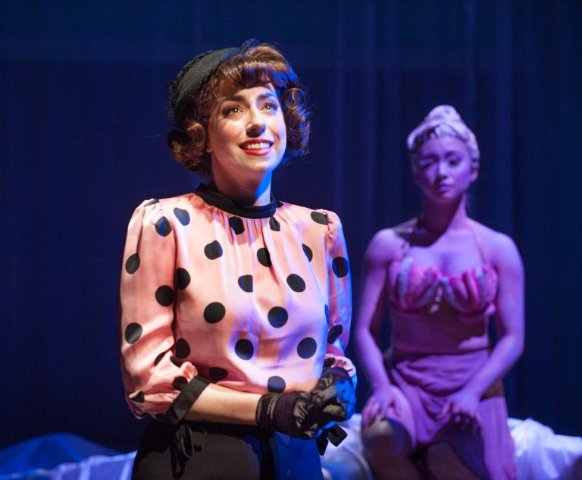 Packaging often enhances the appeal of a product without adding anything substantive to it. The always innovative Opera Parallèle has taken Leonard Bernstein’s modest one-act opera Trouble in Tahiti from 1952 and framed it with complementary wrapper to produce an exciting entertainment. The striking production of the core piece itself, plus the addition of several lagniappes, yield a cohesive mash up that is greater than the sum of its parts.

The 1950s in America marked a signal break with the past. In the housing arena, affordable homes in suburbia gave families an opportunity for their own piece of paradise. But in Leonard Bernstein’s perception, the walls of these natty-looking suburban tract homes conceal conflict and emptiness. Looking for perfection, many families were falling apart trying to survive. Seemingly unlikely material for an opera, the composer explored the treadmill existence of “keeping up with the Joneses,” supported by a very listenable contemporary score influenced by the Broadway musical and infused with jazz motifs. As a companion piece to this one-act vignette, Bernstein later wrote A Quiet Place which follows up with this couple from Trouble in Tahiti thirty years later. But the sequel never reached acceptance, no matter how it was revised or combined with the earlier work.

Trouble in Tahiti is structured with two principal roles, a husband, Sam, and a wife, Dinah. The couple has settled into a relationship in which each constantly irritates the other with benign habits that would be ignored in other people. Their disinterest in each other reaches the point that when they run into each other on the sidewalk at lunchtime, they both lie about having another engagement to avoid having to spend the extra time together.

The remaining singers are comprised of a jaunty scat-jazz fusion trio that acts as a Greek chorus. Brightening the mood by chirping in close harmony like the radio advertising jingles of the day, they offer illusory counterpoint to the problems the couple have. They wax on about the virtues of the suburbia which has left Sam and Dinah soulless.

In this “day in the life” narrative, arias reveal the couple’s ennui, leading to an interesting technique in which full orchestral color and voice give way to a capella, which in turn gives way to the naked speaking voice and Dinah’s desultory response “It doesn’t matter” to Sam’s question about going out to brighten their evening. Then, reflecting on the movie she’d seen that afternoon, Dinah’s “Island Magic” aria exposes the corollary of the real Tahiti with its enticing exterior but a troubling underbelly to their suburban Tahiti.

A turntable that supports the rotating set “acts” as another character. In addition to facing the proper scenery forward, it represents the treadmill that they are on and rotates at variable speeds to reflect the mood of the singer. Projections fill out the stage with visual references to life as it is and with aspirational images that advertisers foist upon us. The video supporting “Island Magic” is hilarious and is one of the elements that balance the otherwise depressing trajectory of the marriage.

Opera Parallèle’s brilliant solution to fill out the evening involves several components. At opening, the character who will become Sam, sings Tony’s aria “Something’s Coming,” from West Side Story, an optimistic view of the future. An overture, Charles Ives’s remarkable The Unanswered Question, follows with its striking division of the orchestra into three groups that operate in different tempos and utilize call and response structure.

The master stroke that is central to the collective of parts is the conceit of casting Jake Heggie’s one-act, one-voice opera from 2005, At the Statue of Venus, as a prequel to Trouble in Tahiti and staging it before the older opera.  The newer opera is a 25 minute soliloquy by Rose, who the audience must accept will become Dinah, and who is waiting for a blind date in a museum. Heggie’s music is completely compatible with Bernstein’s, so the fit is ideal. Librettist Terence McNally incisively explorers every anxiety, every hope, every false identification that Rose faces as she fears that her date may not arrive.

Mezzo Abigail Levis depicts the humor and unease of Rose deftly, as she will playing Dinah later. What’s more, she masters the vocal demands of the incredibly long act-length aria with command over her full vocal and emotional range. Throughout the opera, Venus, played by Steffi Cheong, postures and dances whenever Rose is looking away, adding to the amusement of the situation.

The rest of the cast is top notch as well. As Sam, baritone Eugene Brancoveanu delivers with power and ease. His combination of mellow tone and fine diction convey a very natural sense, as does his acting. The jazz trio is delightful. Soprano Krista Wigle, tenor Andres Ramirez, and baritone Bradley Kynard are all opera singers, but they are perfectly suited to the sharp moving scat idiom. Brian Staufenbiel’s production enriches the opera by adding dimensions and creating visual candy, while Maestra Nicole Paiement conducts the musical aspects with her customary authority and flair.  All of the voices and instruments are well integrated.

This evening of opera is not traditional in many ways, but it is delightfully sophisticated and well executed. Even the intermission entertains with a video of Bernstein opening his televised Norton Lectures on The Unanswered Question from 1973. This combination of short pieces and excerpts should appeal not only to opera goers but to most with any interest in drama or musicals.

Trouble in Tahiti with music and lyrics by Leonard Bernstein and At the Statue of Venus with music by Jake Heggie and lyrics by Terence McNally are produced by Opera Parallèle and play at SF Jazz, 201 Franklin St., San Francisco, CA through February 18, 2018.