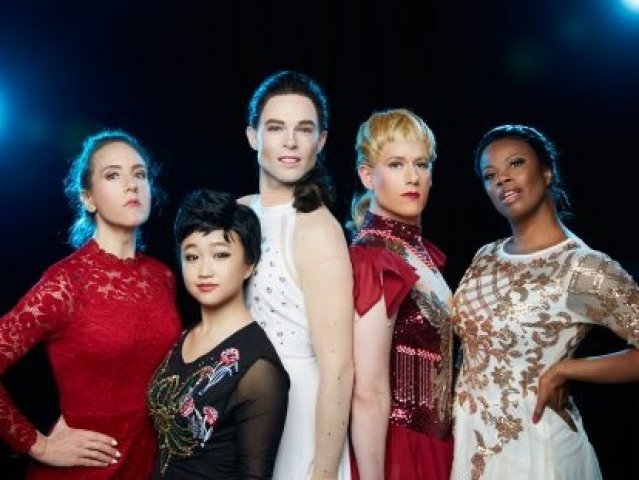 Tonya Harding’s story just won’t go away. Surrounded by media frenzy that fanned the fires around OJ Simpson's trial, which occurred at about the same time, it is a big, ugly, fascinating tale.  Harding’s main competitor in figure skating competition got whacked in the leg. There enough images and tales to last for a long time.

Toe Pick by Zachary Grady, who also plays Tonya, creates the frenzy in video images. Americans have an endless appetite for people whose stories are even worse than their own.

Zachary Grady had a reading of his take on the event before I Tonya, the current Academy Award-nominated film. Grady, weaving together transcriptions of TV interviews and reports,  embeds the tale in the media. Iconic anchors Connie Chung and Jane Pauley are characters in his play. While I Tonya is about class and the need for the figure skating athletic event to have pretty, well-behaved young ladies participating, Toe Pick focuses on the odd criteria of beauty and athleticism judged together in an Olympic event.

What fascinates, however, is the fantasy world of figure skating center stage at Dixon Place where Toe Pick is being presented. We are in a dream world.

For decades Dixon Place has been home to innovative new art works. There is no ice at Dixon Place. Instead, almost like a heavenly cloud, a white rink made of durable felt is rolled out. The actors ‘skate on it’ combining athleticism and dance.

Tonya is brilliantly played by a man, the obsessed playwright, Grady. So too Nancy Kerrigan, who is captured in all her awkward glory. Her leg was brutally hit by a team hired by Tonya’s estranged husband. Who knows what Tonya knew. This central event occurs offstage in Toe Pick.

Mothers are on stage characters. Tonya’s we have come to know as a mother from hell. Yet she is not a stage mother. Skating was Tonya’s own idea when she was a tiny tot. Her brother and sister escaped home to lead lives of criminal robbery and prostitution. Kerrigan’s mother is a fawning, overweight blind woman of not much class. Yet she is more fawning than mean. You have to admire both girls for surviving.

Neither of them can compete with charming, well-prepped skaters with the right costumes and the right moves. The triumphant Ukrainian Oksana Baiul appears in a pink tutu with pink sequins from head to toe, smiling, ingratiating herself, and making all the right moves. She is hilarious, as are the other figures.

Touching moments are created by the disconnect between desire and ability. While Harding is an excellent athlete, she simply does not have the grace required for the gold.

In the midst of the Olympic Winter games in Seoul, we remember that figure skating has peculiar demands. We appreciate the beauty of the athleticism of all the athletes, curling, bob sleds and so on. Figure skating ups the ante with the demand of balletic beauty. Neither Kerrigan nor Harding could measure up on that score.

Director Christopher Murrah takes advantage of the high camp of this world and creates an evening of touching fun.