Medea by Simon Stone at BAM 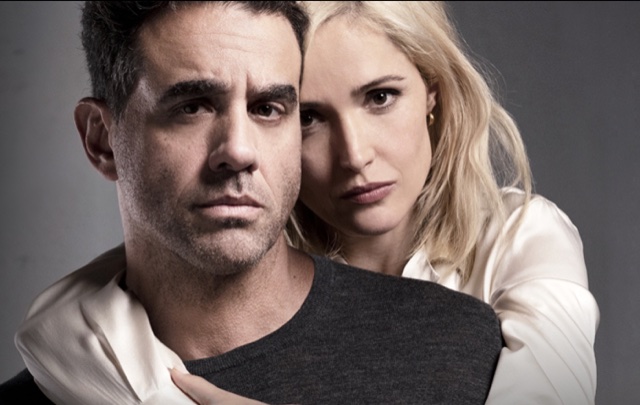 Bobby Cannavale and Rose Byrne in Medea at BAM

BAM is mounting an elegant, moving, hip update of the Medea story.  Starring Rose Byrne and Bobby Cannavale, Bob Cousins' set is a made up of a rectangular screen onto which video images are projected. Often we see the actors in extreme close up. Their miced voices bring them even closer to us.

The backdrop of the stage and two wings, which bend in at about 40 degree angles, are white.  So too the stage floor. This is not a stark white. It is warm, drawing us in. The white calls attention to the stage action and to the emotional temper of Anna and Lucas, Claire, the new girlfriend, Elspeth the therapist, and Anna's and Lucas’ two children, Edgar, and Gus.

Remarkably apt and smooth transitions are made moment to moment. They sweep us along as the mad woman Anna is released from an institution after assaulting her husband, who has cheated on her.

We focus first on Anna. Byrne has a delicate sense of just what moment to laugh, cackle,  tease and confront.  She is a master of manipulation, erupting from her soul which has been severely damaged by her inadequate partner.  She rides her passions with abandon.  The writer/director, like Euripides, reveals character through an actor's way of maneuvering a conversation. Fiercest anger replaces dearest love in Anna's words.

Corinth and King Creon are now a pharmaceutical company where Anna and Lucas are product developers, as Medea was a sorcerer with potions.  Anna has paved the weaker Lucas's way in the firm.  She led him right up to the boss's daughter who he is going to marry.  Medea of course prepped Jason to get the Golden Fleece. He owed her.

Perhaps only a woman can say that women have different sexual needs than men.  We need to be treasured and protected.  We need to be the one and only. We are framed this way.  Men are built to spray. Yet when they love, they sacrifice this basic desire to keep the woman they love safe.  The consequences of failing to do this are dire in Medea. Playwright Stone is right that  things haven't changed much in thousands of years.

Byrne plays Anna's steadfastness with elements of heroism.  Cannavale makesLucas a limited, if sexually delicious character. He is blind to truth and does not have Anna's incisive, emotionally-charged speech. Like most tragedians, Euripides was fond of these paradoxes, as they illustrated the limits of conventional ways of understanding. Therein lie the source of much human error.

Claire (Madeline Weinstein) plays a sweet nothing, but she is the boss’s daughter and attachment to her is key to future advancement. Lucas is to leave with her and the children. He will be running his own division of the company in China.